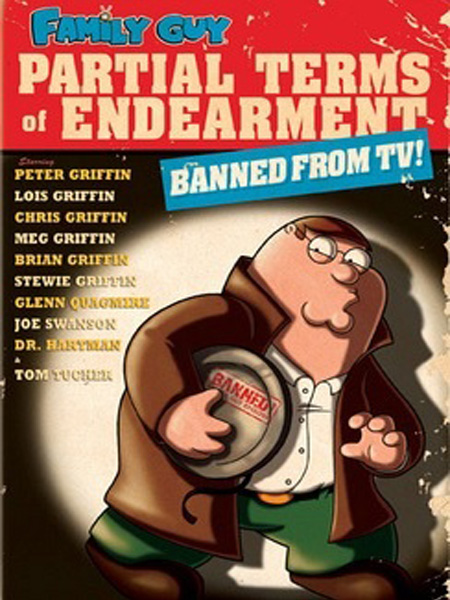 In the episode, Lois is approached by an old friend from college who asks her to become a surrogate mother. After arguing with her husband, Lois decides to become a gestational carrier and undergoes in vitro fertilization.

Unexpectedly, the biological parents are killed in an automobile accident, so Lois and Peter have to decide whether to abort the fetus or carry it to term and give the baby up for adoption.

Peter attempts to persuade his wife to get an abortion but changes his mind after pro-life activists convince him that abortion is murder. Despite Peter's objections, Lois goes ahead with the abortion.

The episode was forbidden from airing in the US due to concerns over its portrayal of the controversial subject of abortion. 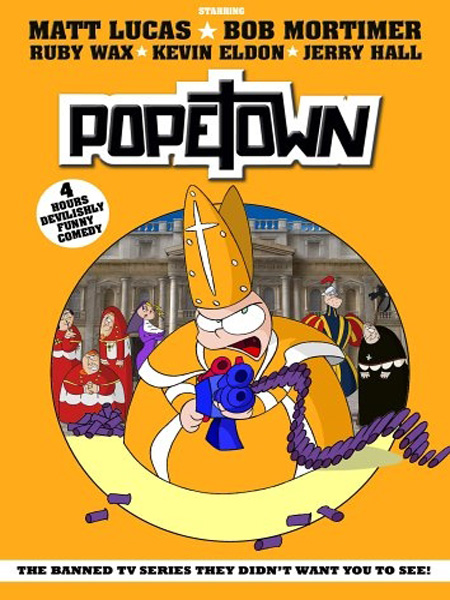 Popetown is a controversial animated sitcom depicting the life of Father Nicholas, who lives in a Vatican City parody referred to as "Popetown." He is charged with being the handler for the Pope, who is a complete nincompoop with the emotional and mental maturity of a four-year-old. Father Nicholas must keep the Pope out of trouble and make sure that the general public does not find out that the Holy Father is an idiot. Other characters include a priest who is a sexual deviant and a trio of corrupt cardinals who secretly run Popetown and attempt to get rich behind the Pope's back.

Predictably, the series was attacked by Roman Catholics and quickly banned soon after it premiered in Britain in 2005. However, not only was Popetown deemed too hot for UK or American TV, it's apparently so offensive that it's not even available there on DVD.

"Buffalo Gals" is a banned episode from Cow and Chicken. The episode, which aired initially on February 20, 1998 along with the follow-up segment "Cow and Chicken Reclining," was banned by Cartoon Network because of its innuendos implying that the Buffalo Gals are lesbians and it's typecasting of lesbians.

The episode contained obvious sexual humor, which includes lines like, "Oh! The Buffalo Gals, a motorcycle riding gang that randomly breaks into people's homes and chews on their carpets." Another scandalous moment happens when the Buffalo Gals are playing softball and talking about "pitching" and "catching," which are slang terms for sex.

"Computer Soldier Porygon" aired in Japan on December 16, 1997. This episode was banned due to a scene with a huge explosion that flashes red and blue lights, making this scene extremely intense. These flashes were extremely bright, blinking at a rate of 12 Hz for about 4 seconds in almost full screen, and then for 2 seconds in outright full screen.

At those moments of bright flashes, audiences started to complain of blurred vision, headaches, dizziness, and nausea. A few people even had seizures, blindness, convulsions, and lost consciousness.

Japan's Fire Defense Agency reported a total of 685 viewers, 310 boys and 375 girls, who were taken to hospitals by ambulances. Although many victims recovered during the ambulance trip, more than 150 of them were admitted to hospitals. Two people remained hospitalized for over 2 weeks. A small portion of the children were diagnosed with photosensitive epilepsy. 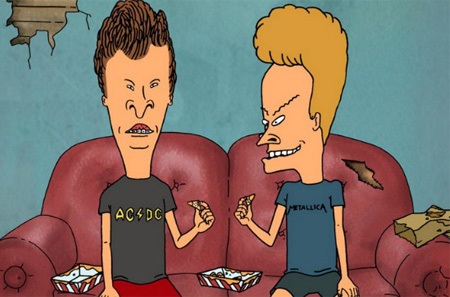 In 1993, an episode entitled "Comedians" depicted the two super idiots burning down a comedy club. A month later, a five-year-old boy was supposedly inspired to set his bed on fire, resulting in the death of his baby sister.

MTV pulled the episode, and while it finally returned to the airwaves, its content was seriously edited to remove all the references to pyromania.
In the wake of the Columbine massacre, two episodes that depicted Beavis and Butthead shooting guns were temporarily forbidden in the US, as well. 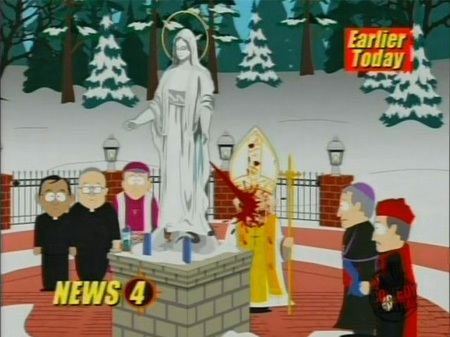 "Bloody Mary" is just one episode of the series South Park. It originally aired on Comedy Central in the United States on December 7, 2005, which is the eve of the Feast of the Immaculate Conception, a Catholic observance related specifically to the Virgin Mary.

In the episode, Randy drives drunk and loses his driver's license. He's then ordered to attend Alcoholics Anonymous meetings, where he learns that his alcoholism is a potentially fatal sickness. Meanwhile, the Virgin Mary starts bleeding out of its anus and Randy believes that he can be cured if the statue bleeds on him.

Pope Benedict XVI comes to investigate, and discovers that the blood is actually coming from the statue's vagina. The Pope says that, considering the fact that "chicks bleed out of their vaginas all the time," this is no miracle. Randy, disappointed by this, realizes that God did not heal him and rushes to the bar.

As might be expected, the Catholic League demanded an apology and asked that the episode "be permanently retired" and not made available on DVD.

7Inciting Bullying and Breast Augmentation: Pokemon - Beauty and the Beach (2000)

In this episode, all of the female characters enter a beauty contest. James puts on some kind of body suit with inflatable breasts and also enters. James then taunts Misty, who has very small breasts, with the line, “Maybe when you're older, you'll have a chest like this,” while she shakes her big boobs with both hands. However, it gets weirder when Pamela, another girl with big boobs, apparently is a male character.

The main reason for banning this episode was the fact that James had inflatable breasts and he offended Misty with them. The scene was later cut out and was only shown once in Japan.

The episode "Monkey" from Dexter's Laboratory was banned from the air in the United States, Canada, and the UK due to this scene, in which Krunk from the Justice Friends is seen drinking alcohol, getting drunk, and finally throwing up. It also features a character named the "Silver Spooner," a parody of "Silver Surfer,” which portrayed many homosexual stereotypes.

Since being banned, it has aired once in the United States on Friday, August 23, 2002 on Cartoon Network. 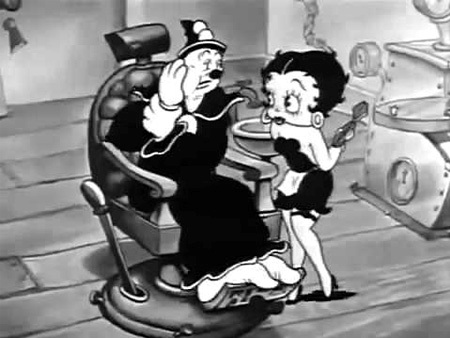 There are tons of banned Betty Boop cartoons. Some are too racist, others are too risqué, but in this case one was censored because of suggestive drug use.

Tiny Toon Adventures aired for three seasons between 1990 and 1993. The show itself was usually pretty innocent except for one episode entitled "One Beer," in which Buster Bunny, Plucky Duck, and Hampton J. Pig get drunk, steal a police car, and die in a horrible accident. It only aired once and was then banned, for some reason. 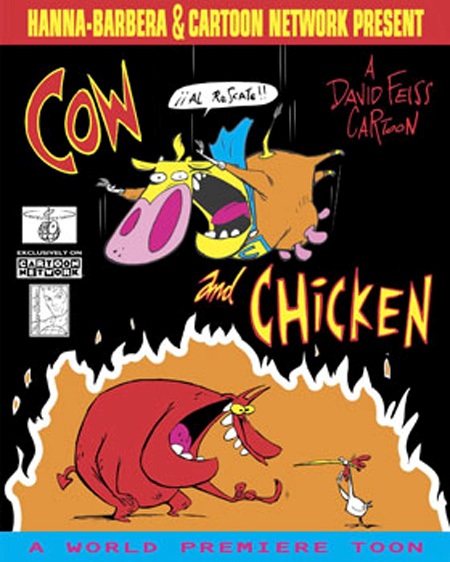 The episode starts off with Cow and Chicken watching TV. Meanwhile, The Red Guy (Known as the Devil in this episode) is thinking of people to take to Hell, and he, of course, picks Cow and Chicken, who were recommended by Cerberus.
Cerberus tempts chicken with a pack of cigarettes, and then sends him to hell for trying to smoke tobacco products while underage. Chicken says that he will never do it again but the devil says that it's too late, so Supercow finally comes to save the day and rescues chicken from hell, taking him back to their home.

12Undertones of Communism and Capitalism: The Powerpuff Girls – See Me, Feel Me, Gnomey (2012) 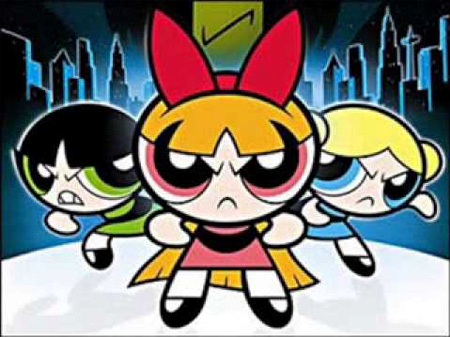 "See Me, Feel Me, Gnomey" is a musical rock opera episode that aired just one time in the UK and other regions due to content comparing communism to democracy.

The Powerpuff Girls are once again fighting all of the villains but they are defeated. Just then, a drop of rain falls into a crack in the ground, and he tells the girls that he can get rid the world of all evil, but to do so the girls must give him their powers.

The girls agree and the gnome casts a spell to end all evil. Townsville is now, seemingly, a peaceful and harmonious utopia, and the townspeople worship this gnome for forming a cult devoted to him.

The Professor convinces the girls that, even though the gnome has provided safety, he has robbed the town of its freewill. Since the gnome has become evil, the deal he made with the Powerpuff Girls is broken and the girls regain their powers. The girls travel to the gnome's headquarters and confront him, returning the world to the way it was. 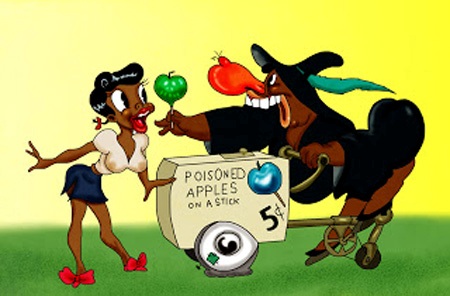 Coal Black and de Sebben Dwarfs was released in theaters on January 16, 1943 by Warner Bros. Pictures and The Vitaphone Corporation.

The film is notable for being an all-black parody of the Brothers Grimm fairy tale "Snow White," known to its fans from the popular 1937 Walt Disney animated feature Snow White and the Seven Dwarfs.

The portrayal of the characters, on the other hand, is an example of darky iconography, which was usually accepted in American society at the time.

Because it was produced in America during World War II, there is also anti-Japanese sentiment; the firm "Murder Inc." advertises that it does not charge to kill "Japs."

Only So White escapes the extreme caricature given to the other characters, although she is stereotyped in a different manner. She is depicted as an attractive young woman with a voluptuous figure, which is accentuated by a short skirt and a low-cut, cleavage-revealing blouse.

In Coal Black, So White is the object of sexual desire for every male character in the picture. This draws upon the stereotype of the young attractive black woman as an "exotic" sexual being, a stereotype present in roles that African-American actresses played in American cinema.

Consequently, it has rarely been seen on television and has never been officially released on home video. However, it is often named as one of the best cartoons ever made, in part for its African-American-inspired jazz and swing music.

A young African-American boy has been hired to drown a cat in the river. While the boy stares at the water, the cat slips out of the sack and fills it with bricks. The hidden cat, pretending to be the boy's conscience, says, "Go ahead, boy," and reminds him that he has been paid "four bits" to do the job. Sambo reluctantly drops the bag in the river rather than return the money.
The cat then disguises itself as its own ghost, painting itself white and donning wings and a halo, and proceeds to "haunt" Sambo by repeatedly sneaking up on him and whispering "boo." Sambo runs away, but the cat rattles a pair of dice, causing Sambo to fall into a trance and sleepwalk back to the cat.
The hauntings continue until Sambo and the cat fall in a pond, washing off the cat's paint. When Sambo realizes that he has been tricked, he kills the cat with a shotgun blast. Immediately afterward, a line of nine ghost cats marches toward Sambo.