1Throwing Babies from a Tower for Good Luck (India) For 500 years, worshippers at a Muslim shrine in western India have continued the tradition of throwing babies from a 50-foot tower for good luck.

The children are taken to the top of the building, thrown down onto a bed-sheet held taut by men 50 feet below, and quickly passed through the crowd to their mothers. The parents proudly throw down their children due to a strong belief that the practice of this ritual blesses their offspring with good health, luck, courage, and life-long strength.

The annual celebration in observed by Muslims and Hindus in the Indian state of Maharashtra, and it also takes place in smaller villages throughout the country.

Well, if your baby gets thrown off a 50-foot tower and survives, one would assume he's indeed quite lucky. 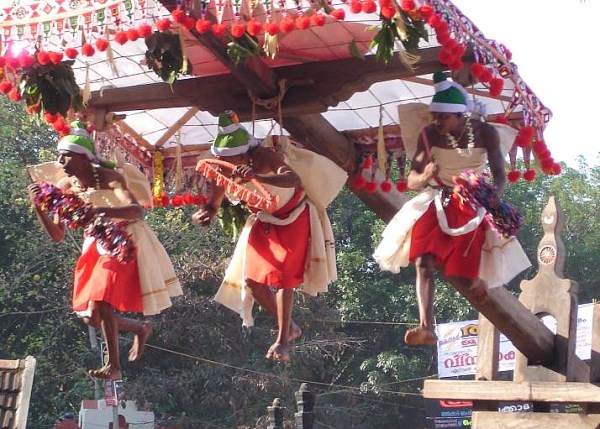 "Garudan Thookkam" is a ritual art form performed in Kali temples in southern India. The people who dress up as Garuda (a Hindu divinity) perform a dance, and after the performance the backs of devoted Hindus are pierced by sharp hooks. The men are then lifted off the ground onto a scaffold using ropes, sometimes with babies in their hands, and taken around the temple as a mark of offering to the Goddess.

Sky burial is a funerary practice in Tibet wherein a human corpse is incised in certain locations and placed on a mountaintop, exposing it to the elements and animals, especially predatory birds.

Most Tibetans follow Buddhist traditions, which dictate that the human body is merely a vessel and can be discarded. The practice was eventually forbidden, but it can still be performed with the family's permission.

4Being Possessed and Convulsing (Haiti) 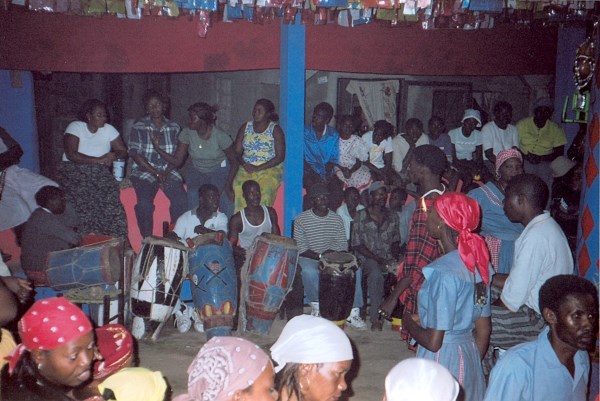 Voodoo worshipers believe that it is important to honor and care for all of the spirits, as it is believed that they become weak over time and depend on humans for nourishment. Rituals and sacrifices are used to rejuvenate them; in other words, the life force of a sacrificed animal will transfer to the spirit.

These rituals are done to gratify the gods, called "Loa." An animal, such as a sanctified chicken, is sacrificed in order to satisfy Loa, which are sustained by the life energy that is released during the sacrifice.

During the ceremony, worshippers can be “mounted,” or possessed, by a Loa. The Loa will take complete control of the individual and will offer advice, give cures, and deliver prophesies to the assembly. This can be quite a violent occurrence, since the participant can flail about or convulse before falling to the ground.

5Baptizing a Person on Behalf of One Who is Dead Baptism for the dead is a Mormon practice of baptizing a person on behalf of one who is dead. In other words, a living person receives the ordinance on behalf of a deceased person.

Mormons believe that their minster has missionaries in the "spirit world" who are busy spreading the Mormon gospel to dead people who have not received it yet. Should any of these dead people want to convert to Mormonism, they are required to abide by all of its rules, one of which is baptism.

6Wearing No Clothes and Using a Peacock Feather Duster (India) Outward appearance is seen by the Digambaras as an index of properly understanding the doctrine, so a "true" monk must be completely naked. He must abandon all possessions and no longer subject himself to the social considerations of pride and shame. He drinks water from a gourd and begs for his food. He can eat only once a day, as well.

In accordance with their practice of nonviolence, the monks also use a peacock feather duster to clear their path of insects to avoid trampling them.

Because women are not allowed to be naked ascetics, Digambaras believe that they cannot reach the level of detachment needed to become liberated. Therefore, a woman must be reborn in a male body to reach liberation.

7Rolling Over Leftovers of Food Partaken by Brahmins (India) The practice, said to be 400 years old, involves people rolling over plantain leaves containing leftovers of meals consumed by Brahmins in the belief that all troubles and ailments will be cured.

The Karnataka government informed the High Court that it has decided to modify the controversial practice at the Kukke Subramanya temple. From now on, food not tasted or eaten by anybody will be placed on plantain leaves in the outer yard of the sanctuary. A secret group in the Seattle area practices Pagan rituals to appease the spirits of fertility and fruitfulness through sex rites that were practiced in the ancient Middle East over 1,500 years ago.