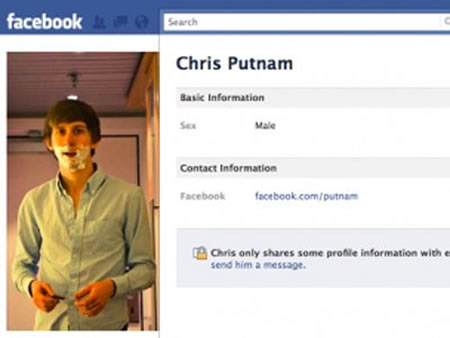 Chris Putnam got hired by Facebook in 2006 when he hacked the site and made thousands of profiles look like MySpace, at their college, Georgia Southern.

Facebook had just come to their campus, and they wanted to see if it had security holes. Putnam created a viral worm that spread silently from profile to profile; the worm called home to his server and asked it for instructions. After it was on a few thousand profile pages, Putnam flipped the switch and made all of the pages look like MySpace profiles.

Before long, Facebook called Putnam and asked for an explanation. By the end of the conversation, Putnam was offered a job interview. 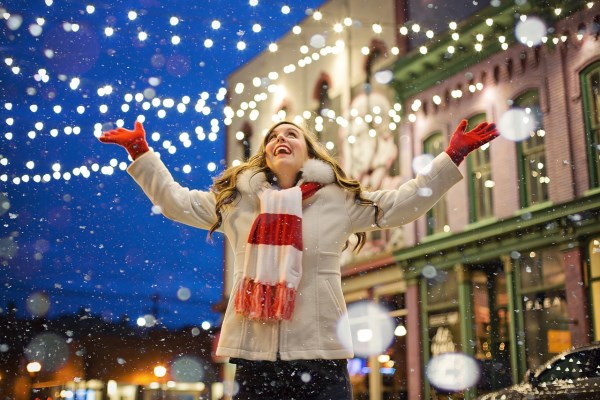 Every neighborhood has "that one neighbor" around the holidays; you know, the one who drapes their homes in so many decorations and lights that their property becomes an inadvertent beacon for low-flying aircraft.

Liz Hickok of Georgia, however, managed to turn her knack for Christmas decoration into a boon for her career, with lights on her house which read "My wish, HR job, Liz Hickok, Linked In." This creative bit of self-advertising wasn't just a gimmick: it resulted in a number of job recommendations from local passersby and LinkedIn users alike.

They aren't lying when they say you can buy nearly anything on eBay; apparently, you can even buy employees. In 2011, 18-year-old Josh Butler, frustrated after applying for nearly 600 jobs without a breakthrough, took a drastic step to stand out from the crowd by auctioning himself on eBay for a starting bid of £16,000. Crazy or not, at least the ploy worked by attracting attention; Butler quickly received as many as three job offers after the stunt. 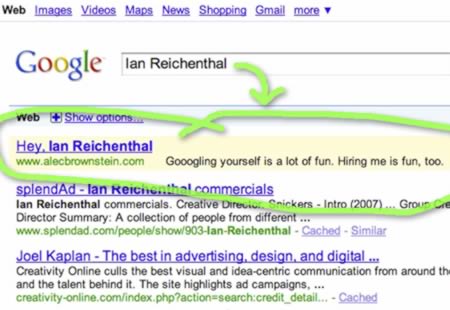 Like a lot of people Alec Brownstein needed a job, so he took matters into his own hands. He bought ads on Google for the top names on Madison Avenue. When those people did their customary search of their own name for press hits, the first thing they saw at the top of the page was Brownstein's ad: a direct pitch for work with a link back to his own web site, which features a bio and examples of his work.

Brownstein obeyed the number one rule of job search: identify your targets and get noticed by them. He created ads for just five executives, resulting in four interviews and two job offers, and all for around six dollars, which is less than most people pay for postage on a traditional resume mailing campaign. To top it all off, Brownstein proved his effectiveness in the world of advertising by selling himself, likely leaving the executives to wonder what he could do with a brand. 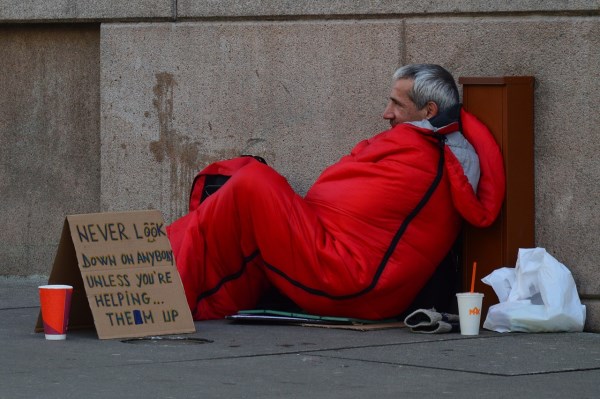 The Cleveland Cavaliers offered a job and a house to a homeless man with a golden radio voice.

Ted Williams was spotted by the Columbus Dispatch newspaper standing near a highway exit ramp. In a video interview, Williams, holding a cardboard sign that asks motorists for help, says, "I'm an ex-radio announcer who has fallen on hard times." He explains in his smooth, deep voice that he grew up in New York and was drawn to radio at the age of 14.

As soon as he appeared on a local radio show that morning the offers began pouring in -- including a dream job with the Cleveland Cavaliers and a free house. 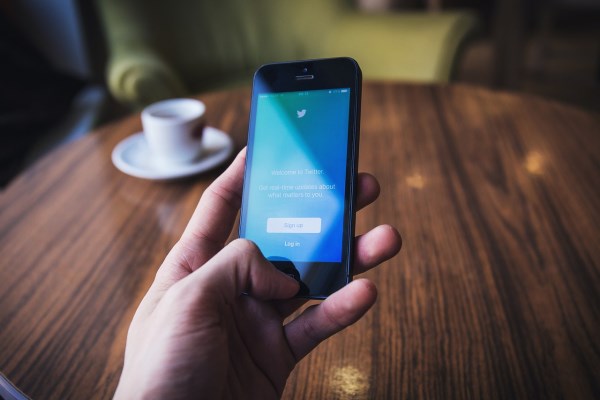 Jon Kolbe shipped copies of his resume and searched for job listings on message boards for seven months during 2009 before finally realizing he had had enough. At wit's end, he appeared on Twitter with a proposition: the first person to help him find a job would receive a free high-definition video camera. Before long, the connections held by fellow Twitter users managed to score Kolbe an interview.There's no word if anyone actually received the promised camera.

7Through a billboard ad 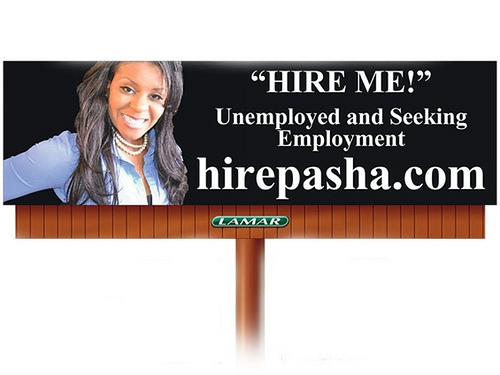 Some individuals have taken the idiom "you have to spend money to make money" to its logical extreme by advertising their existence to prospective employers on billboards. Feilim Mac An Iomaire in Dublin, for instance, splurged $2,544 on a billboard with his contact information and a simple message: "Save Me From Emigration." He was indeed saved after being hired by an Ireland-based betting site.

Pasha Stocking made an even riskier investment by renting a billboard along Connecticut's I-95 for a $7,000. She didn't get a job from it, but the fame she earned from her purchase paid off in its own way; she ended up starting a public relations firm that helps people rent billboards.

8Through a unique cover letter 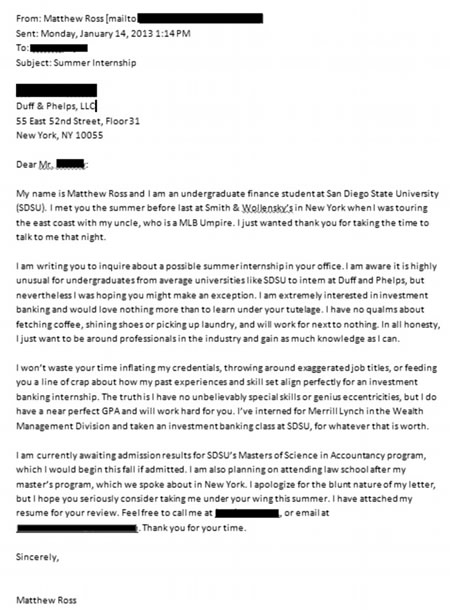 Matthew Ross, a 22-year-old undergrad at San Diego State University, sent a refreshingly sincere cover letter by email that went viral. Rather than inflating his qualifications and bragging about his grades or past job experiences, the humble applicant simply stated his case and matter-of-factly asked for an internship - even if it meant shining shoes.

Ryan Bouley, an investment banker at Duff and Phelps, to whom he sent the email, said if someone with Matthew's qualifications were to come on board, he certainly would not be shining shoes and said he is just the type of person the company was looking for.

The response to the letter has been overwhelmingly positive, with some recipients describing it as "hilarious but bold" and "instant classic.''

9By an interactive resume 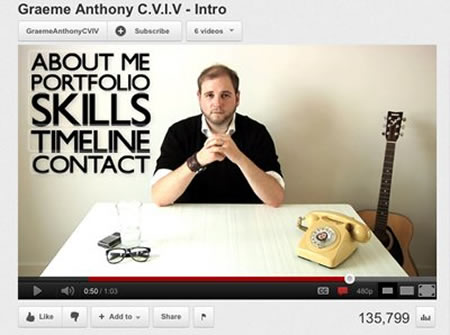 PR and social media consultant Graeme Anthony put his skills to use in this interactive video resume, complete with links to additional sections like About Me and Timeline.

"I've produced this video because let's face it, communications have changed," Anthony says in the clip. "There's nothing wrong with a good old-fashioned pen and paper but it's evolved into something far more exciting and accessible."

Anthony sent the video directly to individual companies and had a job lined up before it even went public. However, after the video was posted on YouTube, he received so many offers that he eventually decided it made more sense to freelance.

10By asking for possible employees to apply to hire him

Andrew Horner disrupted the established order in 2010 with a website that asked employers to apply to have him work for them. In addition to describing himself and his talents, the site outlined the kind of jobs he was looking for and the qualities he was looking for in an employer. Could something so jarringly different (and rather snarky) actually work? The results speak for themselves: Horner received 44 offers, accepting one of them at a mortgage financing site.