1Train shot across terrace after failing to brake 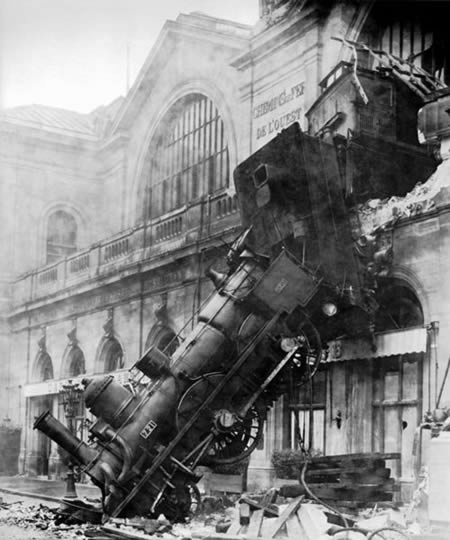 The Gare Montparnasse, one of six large Paris railway terminals, became famous on October 22, 1895 for the derailment of the Granville–Paris Express, which overran the buffer stop. The engine careened across almost 30 meters (100 ft.) of the station concourse, crashed through a 60-centimeter (2 ft.) thick wall, shot across a terrace and smashed out of the station, plummeting onto the Place de Rennes 10 meters (33 ft.) below, where it stood on its nose. Two of the 131 passengers sustained injuries, along with the fireman and two conductors. The only fatality was a woman on the street below who was killed by falling masonry. The accident was caused by a faulty Westinghouse brake and the engine driver, who was trying to make up for lost time. A conductor was given a 25-franc fine and the engine driver a 50-franc fine. 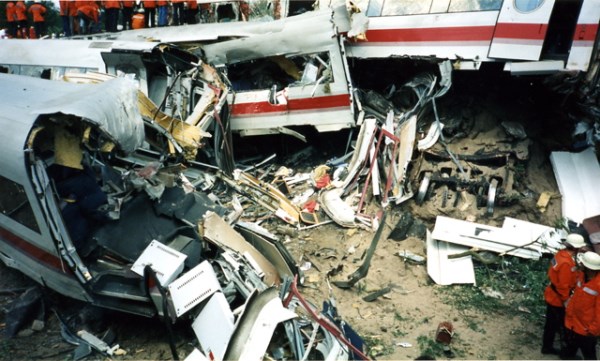 The Eschede train disaster was the world's deadliest high-speed train accident. It occurred on June 3, 1998 near the village of Eschede in the Celle district of Lower Saxony, Germany. The toll of 101 people dead and 88 (estimated) injured surpassed the 1971 Dahlerau train disaster as the deadliest accident in the history of the Federal Republic of Germany. It was caused by a single fatigue crack in one wheel which, when it finally failed, caused the train to derail at a switch. The intense destruction of the train was due to a collision with a road bridge after the derailment.

3World's most fatal rail disaster when train is hit by tsunami 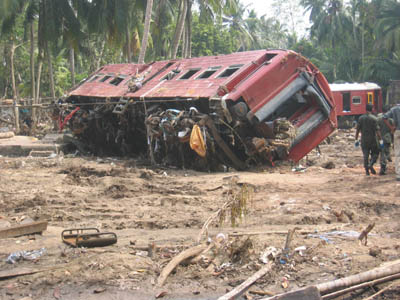 The train, known locally as the Queen of the Sea Line, was a regular service train operating between the cities of Colombo and Galle. On Sunday, December 26, 2004 it left Colombo shortly after 6:55 A.M. with between 1,000 and 1,500 paid passengers and an unknown number of unpaid passengers.

At 9:30 A.M., in the village of Peraliya, near Telwatta, the beach was hit by the first of the huge waves thrown up by the earthquake, which had recently struck off the coast of Sumatra, Indonesia. The train came to a halt as water surged around it. Hundreds of local people, believing the train to be secure on the rails, climbed on top of the train to avoid being swept away. Others stood behind it, hoping the train would take the force of the water. The wave caused flooding in the carriages and began to cause panic amongst the passengers. The next, much larger, wave picked the train up and smashed it against the trees and houses which lined the track, crushing those seeking shelter behind it. The eight carriages were so packed with people that the doors could not be opened, and they filled with water, drowning almost everyone inside as the water washed over the wreckage several more times. Estimations based on the state of the shoreline and a high-water mark on a nearby building place the tsunami 7.5 to 9 meters above sea level and 2 to 3 meters higher than the top of the train.

4Train stolen and crashed into a house 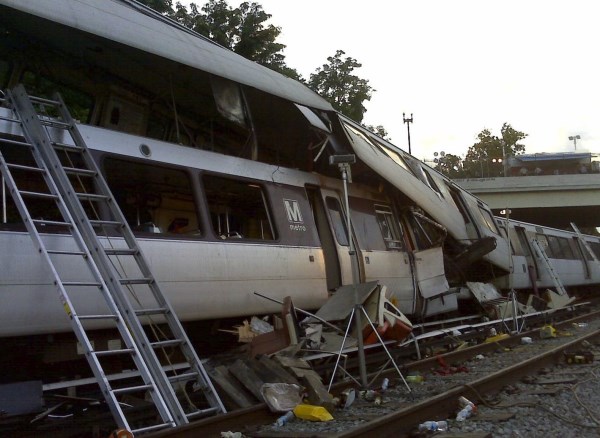 Now, stealing cars, trucks and motorcycles are pretty common occurrences, but stealing a train? That's not something you hear about every day. A 20-year old woman, who works as a cleaner in Stockholm, Sweden, did just that. She Stole the keys to a train, then drove it at a high speed to the end of the track it was on and crashed it into a house after leaving the line and jumping over a street.

Luckily no one except the unidentified woman was hurt. It was early in the morning so there were no other passengers on the train and no one in the house was in the line of fire.

NOTE: It was determined later that the train wasn't stolen. The cleaner accidentally turned it on while cleaning the cab and couldn't work out how to turn it off. 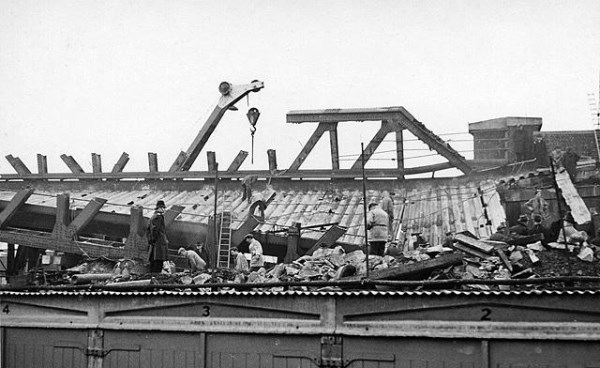 The Lewisham rail crash occurred on the Lewisham by-pass line in London at about 6:20pm on December 4, 1957. In dense fog, an electric train to Hayes stopped at a signal under a bridge and the following steam train to Ramsgate crashed into it, with the collision causing the bridge to collapse onto the steam train. There were 90 fatalities and 109 people were detained in the hospital. The bridge had to be cleared away and it was over a week before the lines under the bridge were reopened, and another month before the bridge was rebuilt and traffic was allowed over it.

The driver of the Ramsgate train was acquitted of manslaughter charges after two trials. The Ministry of Transport report found that he had failed to slow after passing two caution signals so he was unable to stop at the danger signal, concluding that an automatic warning system would have prevented the collision. 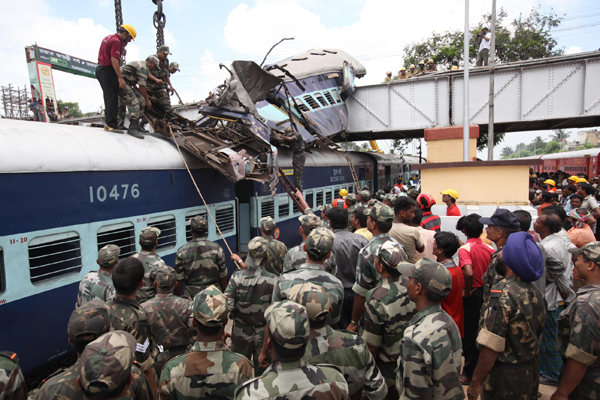 The Firozabad rail disaster occurred in India in 1995 when two trains – Kalindi express and Purshottam express - collided near Firozabad. Purshottam express hit Kalindi express from behind when the latter had to stop due to jammed breaks after hitting a cow. Almost all the people were asleep when the collision tool place. Around 200 people were reported dead and another 200 injured. 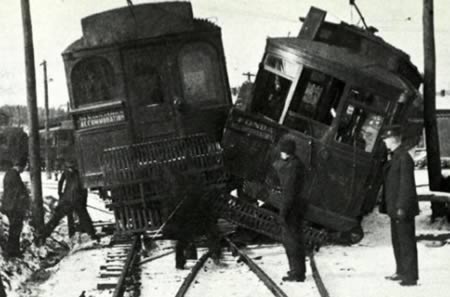 The caption for this photo in William Middleton's The Interurban Era reads:

8Miraculous train derailment with only one casualty 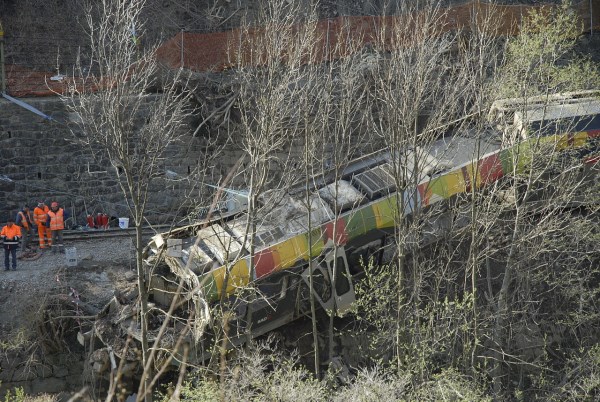 It was a tranquil setting in the heart of the picturesque Lake District.
But on a cold, rainy evening in February 2007, the peace at a farmland near to the tiny village of Grayrigg was shattered when a Virgin Pendolino London to Glasgow express train derailed on the West Coast Main Line. In just a few seconds, eight carriages of the Class 390 tilting train were derailed and 86 passengers and two crew of the 105 people aboard were injured as the 95 mph locomotive came off the rails and carriages scattered down an earth embankment.