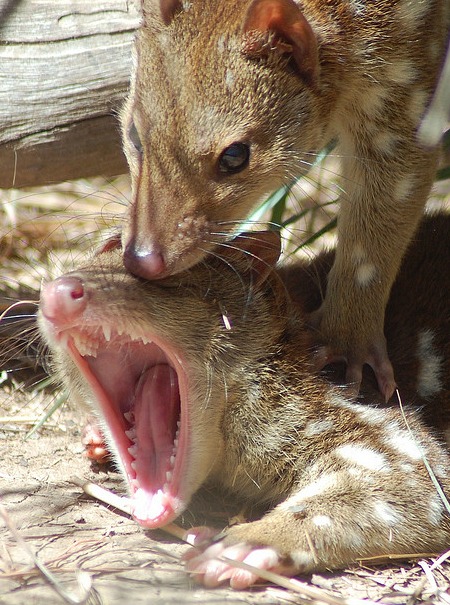 While you may not have already heard of a quoll, if you know enough about their mating rituals, you won't soon forget the species. Every winter, the females all go into heat at the same time, causing a breeding frenzy within the species. The males will try to mate with as many females as possible, grabbing their newest mate by the neck and dragging them off to do the nasty. Average mating sessions last up to three hours, but can go on as long as a full day. That's because the males don't release very many sperm at a time, so they must ejaculate multiple times to ensure their genes are passed on. Like many human males trying to compensate for something, the quoll males are violent and ruthless. In fact, throughout all the biting, scratching and screeching, many females end up killed in the process, only to be eaten by their angry partner.

As if nature wished to compensate the females for their suffering, many of the males put out so much energy during the mating season that they lose weight, start balding and die within only a few weeks of their sexual rampage.

2Bedbugs: Impaler? I Hardly Know Her 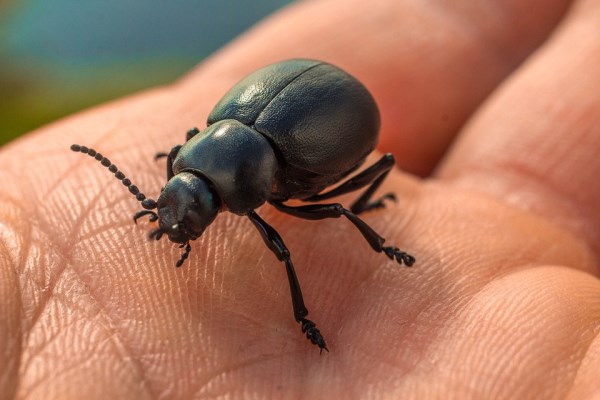 Why bother courting and mating when you can instead just impale and run? That seems to be the thought process behind the bedbug's reproduction method. Indeed, rather than finding the female's reproductive organs and getting a little frisky, this quick-moving bug just stabs his lady in her stomach, deposits his sperm and leaves. The sperm then travel through the female's blood stream into sperm receptacles and eventually into her waiting ovaries.

This type of mating behavior is known by the terrifying title of “traumatic insertion,” and it certainly lives up to its name. At least when it's happening to something as horrible as bed bugs it's a lot harder to feel bad for the victims. 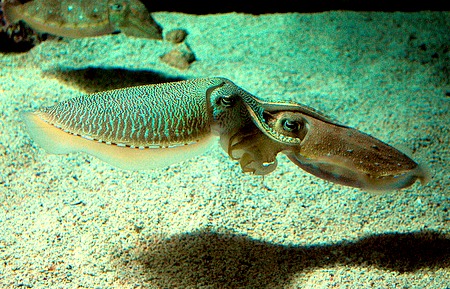 Squids may not seem like the sexiest animals around, but as it turns out, they might be some of the kinkiest. The male bioluminescent Dana Octopus Squid uses its beak and sharp claws to pierce holes in its mate before using a penis-like appendage to insert sperm into the cuts. On the other hand, the Greater Hooked Squid just bypasses the stabbing step by using sperm that independently burrow their way into the female's skin, using an enzyme that dissolves tissue.

The Sharpear Enope Squid is the first-known transgender squid, as some males not only resemble females in appearance, but even have female sex glands. While the debate is still out on what evolutionary benefit this provides, some researchers speculate that it allows these individuals to get closer to potential mates without being detected.

4Seals: Humping Their Way Onto The Endangered Species List 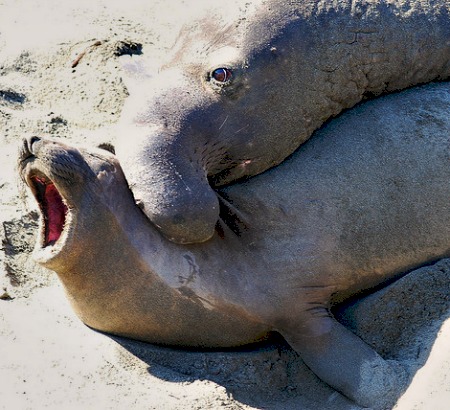 Is there anything cuter than a baby seal? There is when it's been crushed to death by a horde of frisky male seals who wanted to get in the action when they heard another couple mating. Think that's a rare occurrence? Think again. Some colonies have been known to lose 2/3 of their cubs this way. That's why the babies grow up so darn fast –the sooner they bulk up, the sooner they can avoid being crushed to death.

Of course, babies aren't the only ones at risk. The male Southern Elephant Seal often crushes the female's skull in his jaws during copulation and female Monk Seals are often mobbed to death by excited males when they go into heat. In fact, endangered seal species are some of the only at-risk creatures to be put on libido-suppressing drugs in order to stop them from sexing themselves into extinction.

5Seed Beetles: Take A Stab At Quenching Your Thirst 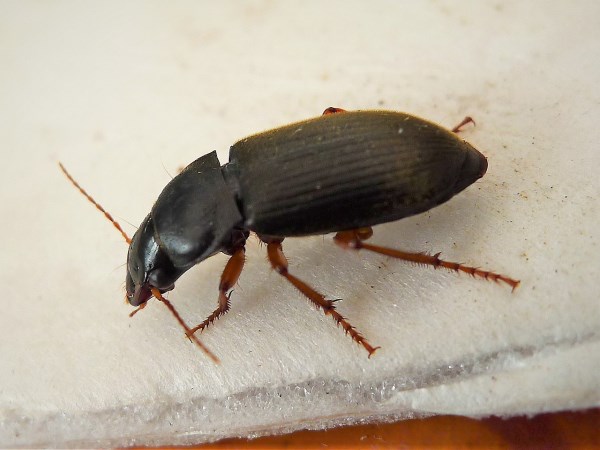 There are over 350,000 species of beetle and their reproductive methods vary drastically. When it comes to beetle sex though, few have it as bad as the female Seed Beetle. That's because the male has a disturbingly spiky penis that always injures the female in the process of copulation. Researchers have concluded that larger spikes somehow help the males win out in the genetic arms race, and that those with the biggest, sharpest spikes also sire the most offspring.

As for why the females would even agree to mate with a partner knowing they would have to go through such a traumatizing experience, scientists have an answer for that one too. It turns out that because the beetles live in such an arid climate, the ejaculate fluid provides females with much needed hydration. When the insects are provided with ample water, female interest in mating drops drastically, but when things get dry, they suddenly have an insatiable thirst for love. Well, at least they get something out of the horrific experience.

Sex might seem easier for hermaphroditic species, but that's very often not the case. All sea slugs are hermaphrodites. But when it comes to flatworms, fighting for the right to be the father can be a dangerous duty. The animals all have a dagger-like penis that they use to hunt for food, but when it comes time to mate, the two flatworms will go about fencing one another in order to avoid becoming the mother. When one of the fighters is stabbed, it will become the mother, meaning it has to give up substantial energy resources to its new brood while the winner will continue to enjoy the life of a bachelor flatworm.

7Slugs and Snails: Playing Cupid Is Less Romantic Than It Sounds 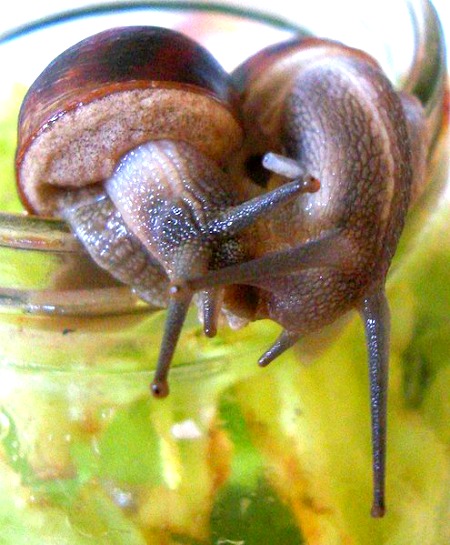 Like flatworms, snails and slugs are hermaphrodites that have to battle as part of their reproduction process. While they might not shake their penises at each other, their mating ritual is certainly just as strange.

For one thing, the creature's genitals are hidden on their necks behind their eye stalks. Since they don't actually have penises, they instead have an archery battle, shooting off so-called “love darts” at one another. The darts, made mostly from calcium, do not contain sperm, but instead cause the victim to become more receptive to the shooter's sperm, giving it an edge in sharing its genes with the next generation.
Shooting love darts can be rather dangerous and some victims have even been known to be shot in the eye and brain in the process –but don't worry, they survive, they just carry around a giant dart for a while.

Of course, dart shooting isn't the only weird bedroom behavior these invertebrates get into. The Banana Slug has a penis of around 6 to 8 inches, roughly the size of its full body. When fertilizing one another, the larger slug will often get his penis stuck inside the other. That would be bad in any situation, but the impatient partner makes it infinitely worse by biting off the offending member in order be able to get going a little bit sooner. Ouch! 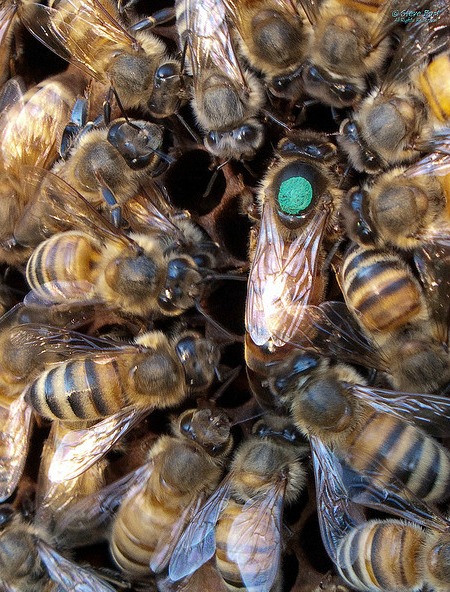 You know how bees often die after stinging humans? As it turns out, this same fate awaits the males who mate with the queen. Before mating, the new queen will need to kill off all of her sister siblings, ensuring she will remain the unchallenged monarch of the hive. Once that messy business is taken care of, the virgin queen will take a mating flight with about a dozen males. While the special mating males, selected from the tens of thousands of other male bees in the colony, might seem lucky at first, their luck is soon to change. That's because they die as their penises explode (audibly even) while inside the queen. She's then loaded up with all the sperm she'll need for the rest of her life, which entails laying up to fifteen hundred eggs per day for three full years.

9Wasp Spiders: Breaking Off A Piece of That…Literally 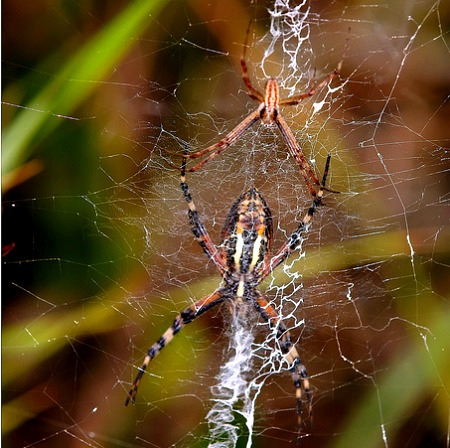 You probably know that black widows often eat their mates, but as it turns out, this is hardly the most violent example of spider copulation. Male wasp spiders allow their genitals to break off inside their partner just before she attacks and eats him. For a long time, researchers believed this was an attempt to escape their eminent demise. But it turns out, breaking off their sex organs had no impact on whether or not the creature survived, but it did make it less likely that the female's subsequent mates would be able to pass on their genes. Females with genitals already broken off inside of them ate their mates much more quickly, providing the males with even less time to attempt to successfully mate first.

Wasp spiders aren't the only species of spiders to lose their junk in the mating process. In fact, the Tent Cobweb Weaver voluntarily chews off one of his sex organs before mating so he can pass his genes along to his mate faster, thereby being able to impregnate her before competing spiders get the chance.

10Octopuses: Watch Which Hand You Shake 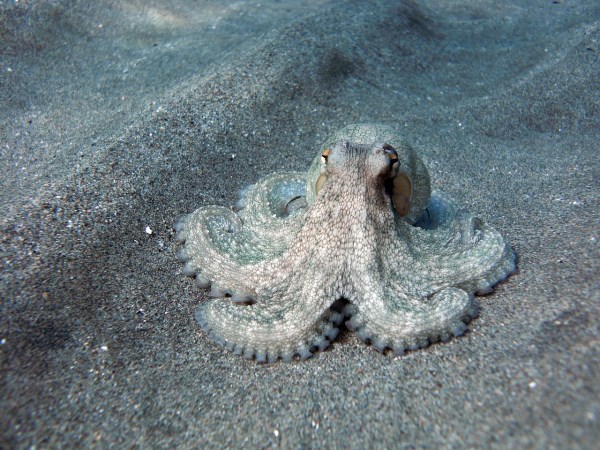 Next time you see an octopus tentacle, just remember, you could be looking at one of his arms, or, at his penis. While the sex organ tentacle isn't truly a penis, in many species, it actually fills with blood and becomes erect just like a human's. Regardless of species though, the basic process involved is always the same: the male places a packet of sperm on his sex arm and then uses it to place the sperm in a slot of the female's body used for reproduction. In every species, the male's organ stays embedded in the female's body. He cannot regrow his sex tentacle and he will die within a few months.

In some species though, the process is much more bizarre. For example, the Paper Nautilus will detach his penis tentacle and allow it to swim by itself over to the female. The Blanket Octopus has a similar unobtrusive mating habit. The male, which is approximately 40,000 times smaller than the female, will swim up to his woman of choice, stick his mating arm to her body somewhere and then swim off to die. The female rarely even notices the encounter, even as the arm left behind will crawl its way around her body until it arrives in her gill slit where it will wait until her eggs are mature. At that point, she'll remove the arm, rip open the sperm packet and sprinkle it over her eggs. She may as well be adding some sugar to her iced tea. Meanwhile, her mate will almost certainly be dead by that point. 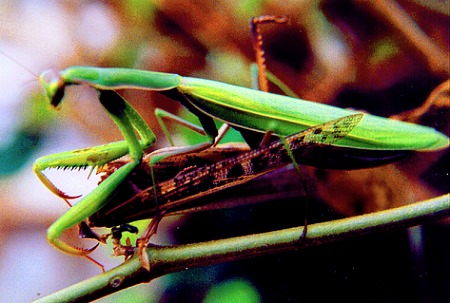 It's common knowledge that female praying mantises eat the heads of their mates during intercourse, but as it turns out, this isn't always the case. In some species, head-eating is a required part of the interaction, as it makes the male ejaculate more quickly. But in most cases, the cannibalism is actually a relatively rare behavior that occurs anywhere from 5-31% of the time. In these cases, the female will only eat the male because she's hungry and needs more sustenance in order to go on living. Remember, most animals only mate to keep their species going and a dead female isn't going to help the mantis survive as a species. When cannibalism doesn't occur, the mating ritual is actually a bit romantic, including a long mating dance and soft antennae stroking. Who knew these guys were such softies?