1Living in a Billboard 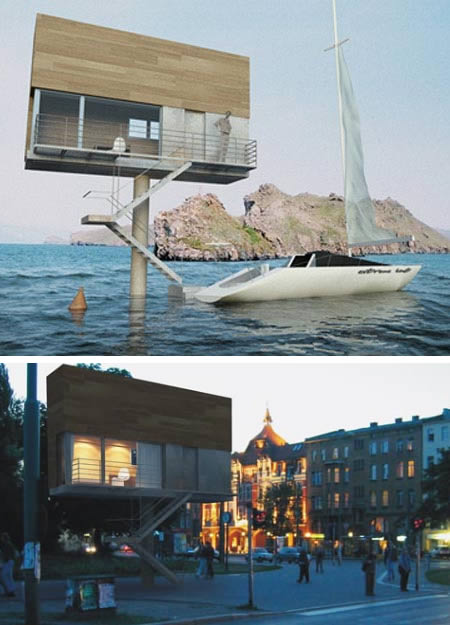 This has got to be recycling at its best. Why throwout perfectly good billboards when you can reuse them as a living space? I don't know about you, but how many billboards have you seen that would make a good one bedroom apartment? This may be the idea, but we shall see if it comes into practical use.

2Living in a Walking House 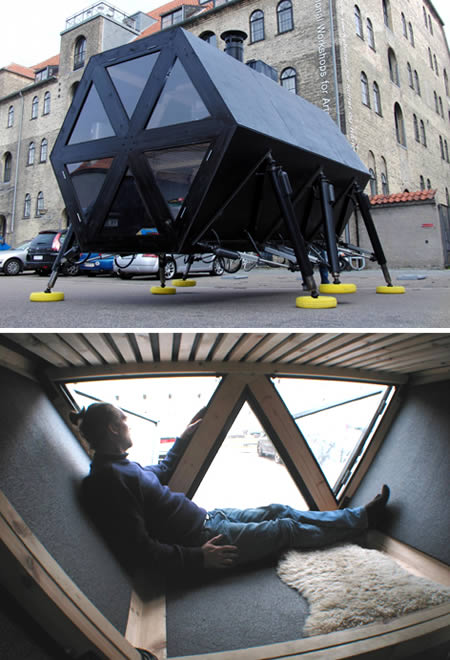 WALKING HOUSE is a modular dwelling system that enables persons to live a peaceful nomadic life, moving slowly through the landscape or cityscape with minimal impact on the environment. It collects energy from its surroundings using solar cells and small windmills. There is a system for collecting rain water and a system for solar heated hot water.

3Living under the Grass 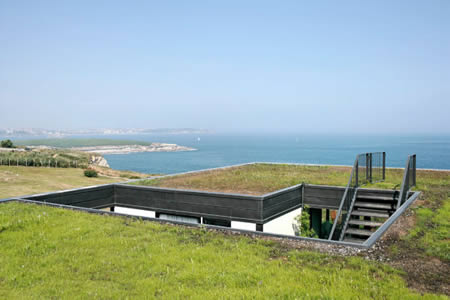 At first sight, the place seems inhospitable. A rocky cliff facing North, unsheltered, where the wind blows cold and makes the waves break would seem the last place you would want to build your house in. But its owners didn't think the same way and, thus, an unusual building of angular, but sober, lines was built to merge perfectly with the surrounding environment. Located in Loredo, in the north coast of Spain, facing the Cantabrian Sea (Bay of Biscay), the OS house, a project by the Nolaster group of architects, has, as its main characteristic, its covering, which is none other than grass.

4Living in a Water Tower

"The Tower," a Tri Level House Standing 85 Feet Tall, is a Replica of a Historical Water Tower that was Reconstructed. The Architectural Design is Combined with a Designer Interior Layout. The Water Tower Features a 360 Degree, Unsurpassed View of the Pacific Ocean, Huntington Harbour and the San Gabriel River.

5Living over a Bridge 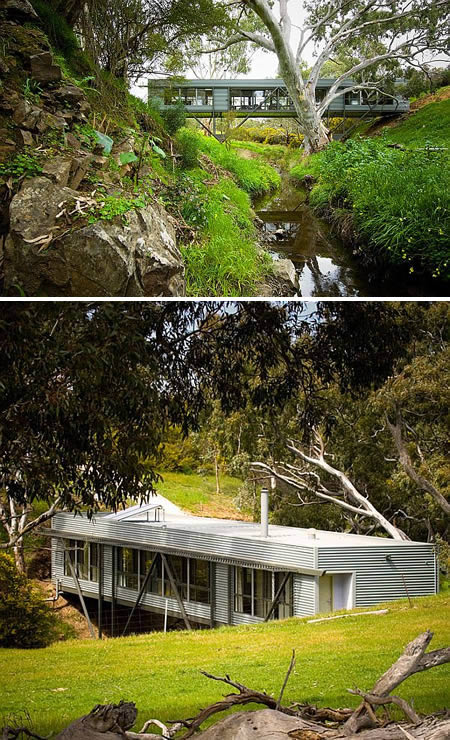 Max Pritchard Architect brought out the adventurer side in you. Living inside a “bridge” surrounded by the lush green scenery was challenging. It was the Bridge House. The house design was consisted of two steel trusses with concrete floors and steel decking. There was a roof made of plantation pipes. The unique house had transparent walls made of glass. The outdoor feeling in was brought by another great example of narrow housing. The box house was situated at one hour's drive from Adelaide, worth $175,000.

6Living inside an Airplane 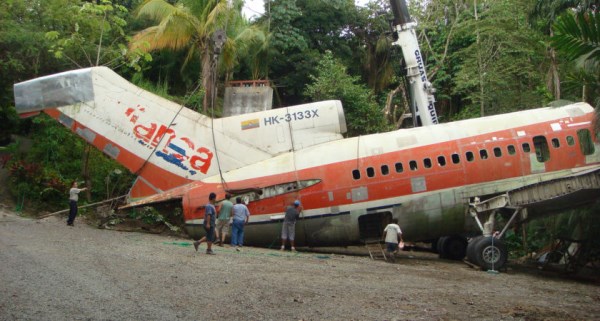 This accommodation is not a private dwelling but instead a suite that is part of the Hotel Costa Verde, a hotel located near Quepos, Costa Rica. It's a fully outfitted, meticulously detailed, two bedroom, Boeing 727 fuselage suite. The creators have refurbished a vintage 1965 Boeing 727 airframe, which in its prior life shuttled globetrotters on South Africa Air and Avianca Airlines (Colombia).

7Living in a Church 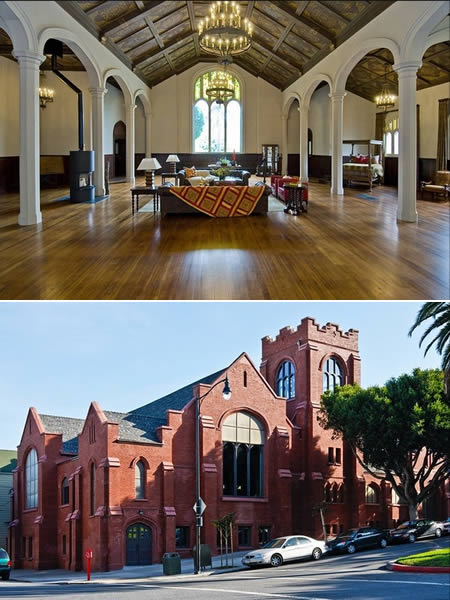 This stunning Gothic Revival-style building is now one of the most extraordinary and largest single family homes in San Francisco. Built in 1909 in San Francisco's famed Mission District, this church fell on hard times in recent years when its dwindling membership did not have the money to finance needed renovations. Enter businessman Siamak Akhavan who purchased the church for $2.25 million and invested another $3 million in it, turning it into a three-bedroom, 2-½ bath, twelve-room home. Its features include an enormous living area, which includes the original sanctuary (with soaring, hand-painted ceilings, arched windows, and most of the original stained glass windows), custom mahogany wood finishes, four fireplaces, and a new chef's kitchen. The Master Suite includes a marble Roman tub room, dressing room, and incredible 360 degree views from the tower meditation room. It's back on the market again, too. Asking price? A cool $7.5 million. 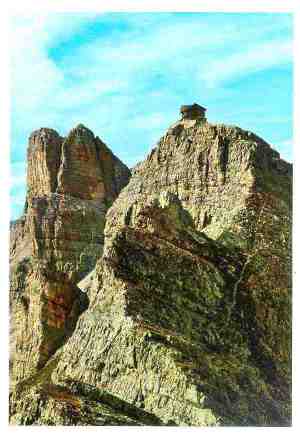 Since 1983, the Rifugio Nuvolau has been a refuge for exhausted trekkers, providing comfort and solace to those trudging in Italy's dramatic Dolomite Mountains. Even during World War 1, the 2,575m high hut served as a point for surveying situations on the summit. Besides a flashback in history, the location will provide a bed, eatables, and the jolly company of other outdoorsy souls like you. 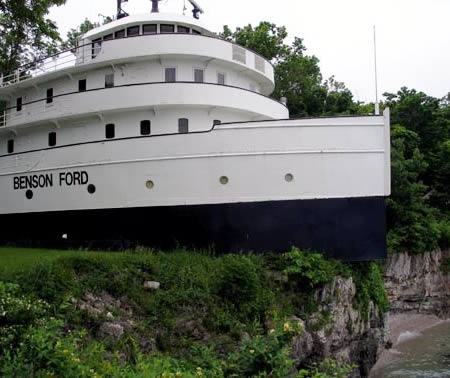 The Ship Residence sits on South Bass Island in Lake Erie at Put-in-Bay, Ohio. Its based on what is left of the former Great Lakes Shipping Boat, The Benson Ford. The boat was built by Henry Ford (of Ford Motors and the Model T) and named after his grandson. After 50 years of service on the Great Lakes, the Benson Ford was scheduled in 1986 to be scrapped. This is when an Ohio couple stepped in and the captain's quarters of the Benson Ford became The Ship Residence, a private home on South Bass Island.

The front section of the Benson Ford is where the walnut paneled state rooms, dining room, galley, and passenger lounge were located. These elegant quarters were removed from the rest of the ship and brought to land to make up the magnificent Ship Residence. 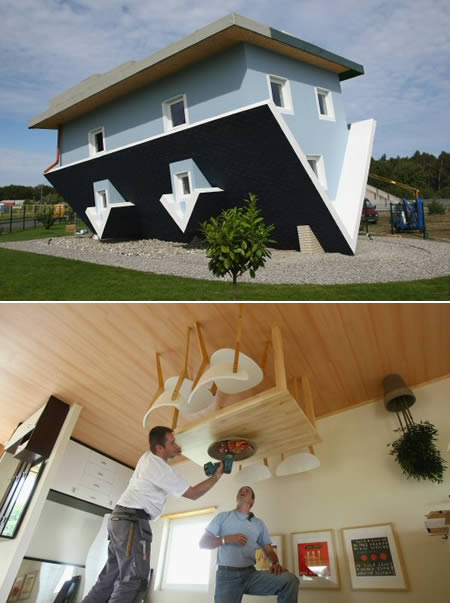 Klaudiusz Golos and Sebastion Mikuciuk created this upside down house for an exhibit in Trassenheide, Germany. It's clearly unlivable but still a lot of fun.