The doorbell is the first thing a guest sees when he gets to your home, and you know what they all say about first impressions, right? Check out these twelve funny doorbells. 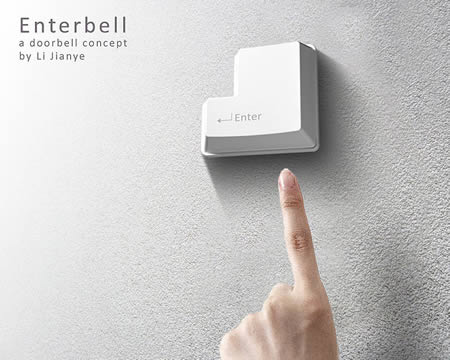 Doorbells are normally pretty ordinary but designer Li Jianye has different ideas with the ‘Enter' doorbell. Talk about cool doorbells. 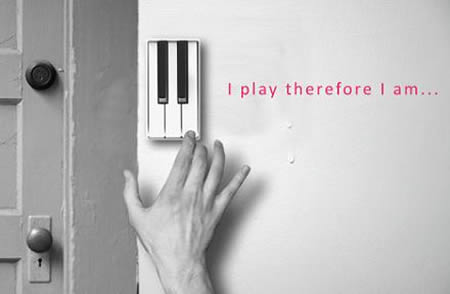 Although the tone of the doorbell is not as monotonous as before, it is still different from piano. However, China's designer Li Jianye gives us a piano doorbell. This product has several piano keys which allow the guest to play what ever tone he likes. 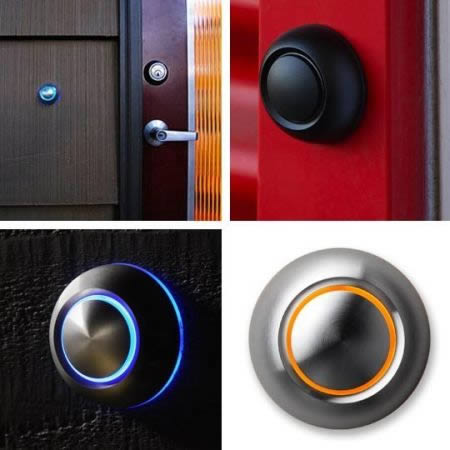 Spore is selling an LED doorbell button called True. It is a mostly-metal 1.8-inch doorbell button that features LED illumination. The doorbell will probably attract people who want to press it just to see it light up. 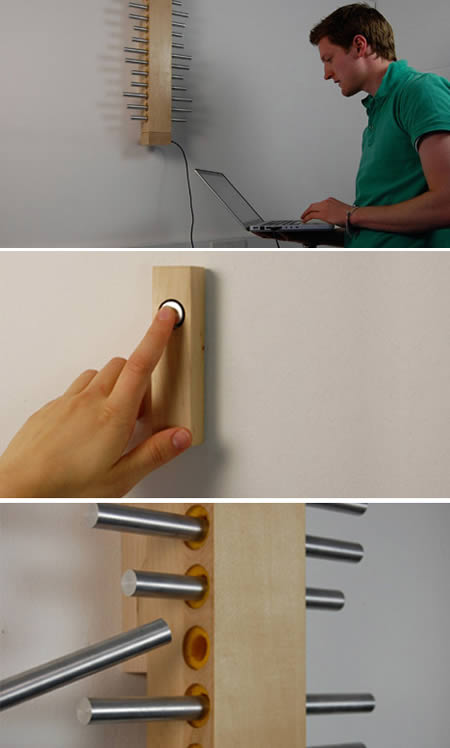 Designer Mike Skene has taken the ordinary old doorbell and pimped it to a new level. Taking initial inspiration from percussion, the action of striking of one body against another and a person's ability to interact with their surroundings through their sense of touch, “Doorbell” is an original take on a well known device providing a unique, evocative user experience that is sure to bring a smile to your face when heard for the first time. Made up of 13 hand tuned aluminum chimes housed in a sycamore frame, the Doorbells contemporary design and appealing sound is a welcome change to the standard functions of a doorbell.

Using an application such as iTunes, users can even download new ring tones in seconds straight to their Doorbell. Additionally, the chimes themselves are interchangeable and can be ordered both individually or in octave sets. So who wants to hear this belt out an ACDC tune? 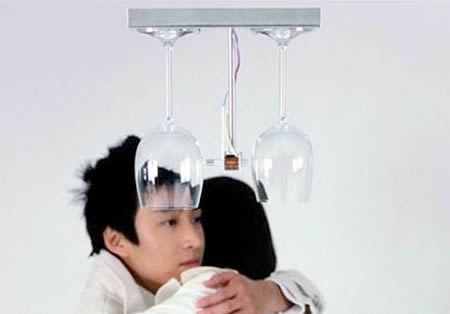 This door bell was designed using wine glasses, especially handmade for those who think every time you get a visitor it's time for a toast. 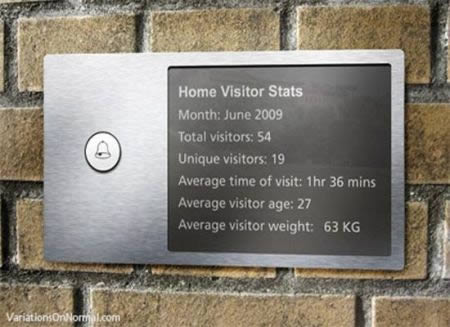 Can you imagine that one day your doorbells become as powerful as a computer? Inspired from the plug-in tool that counts the click-through rates on websites, the home visitor recorder is designed to store visitor stats like total number of visitors, unique visitors, average time of visit, average age of visitors, visiting time, etc. Magic creation by Dominic Wilcox that allows us to get closer to our friends! 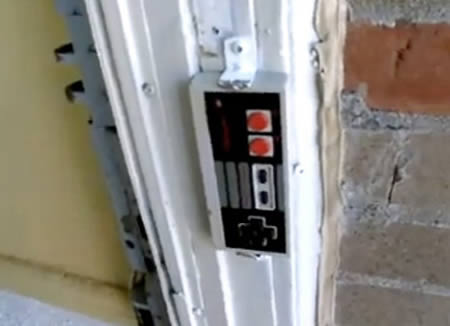 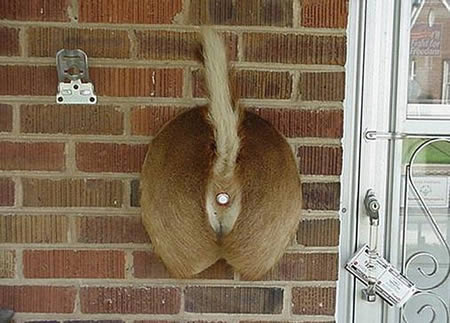 Looks like a good idea if you don't want to be disturbed. Ever. 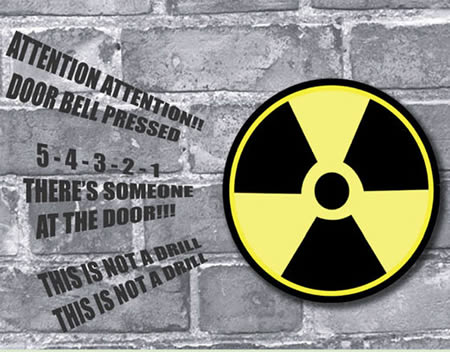 Are you constantly missing the UPS guy because you didn't hear them knock on the door? Or maybe you're just sick of the old “ding-dong” of your doorbell. Well, this doorbell is most certainly going to get your attention – or at least annoy the crap out of you. With a push of its wireless button, the Nuclear Doorbell blinks its lights and loudly announces visitors with a cacophony of bothersome sounds, ranging from a droning klaxon to possibly the worst voice actor ever telling you that there's someone at the door, to the sound of barn animals in a panic. 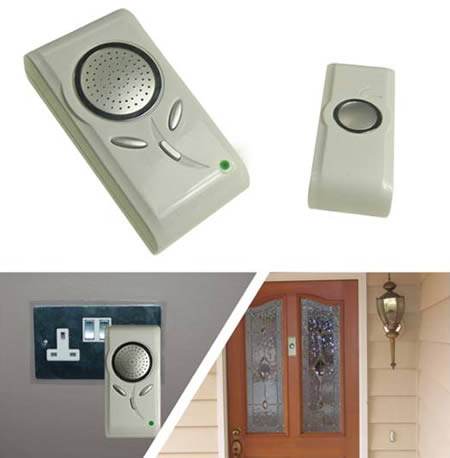 The MP3 Doorbell lets you choose any MP3 as your doorbell tone, it can store up to 300 songs so you will be able to change your doorbell tone all the time to keep your visitors entertained. It comes with 2GB of storage, and consists of a wireless doorbell and a wireless receiver unit, which can also be used as an MP3 player. 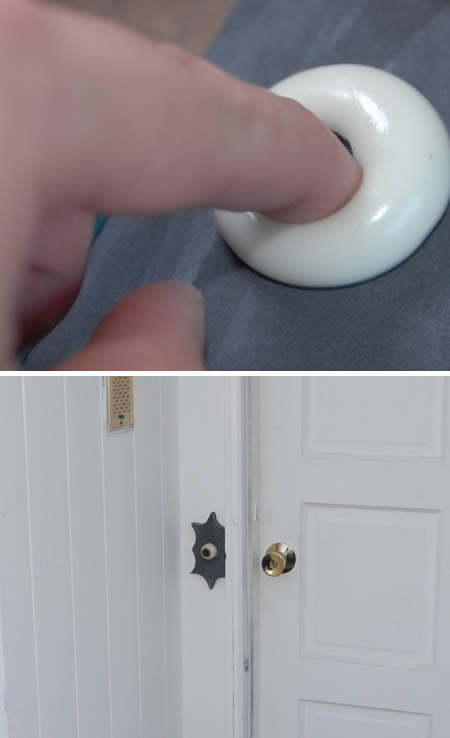 Your doorbell works hard day in and day out letting you know when somebody wants you to come to the door, but it probably doesn't see as much action all year long as it does on Halloween night. So you can transform your boring old doorbell button into a creepy disgusting eyeball that must be poked and squished by unsuspecting victims if they have any hope of summoning you to give them candy. 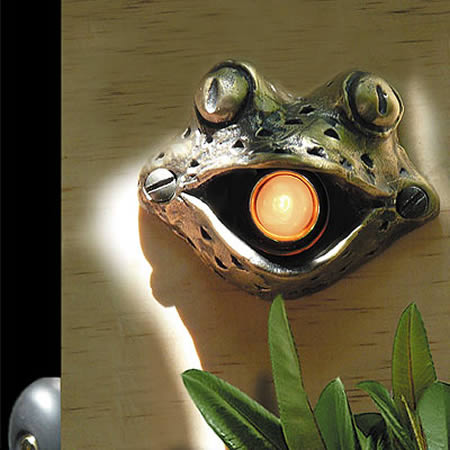 The following doorbell will be of great help to those who adore cute and unusual things in their gardens. This nice frog is both curious and charming, and it will definitely add some pizzazz to your garden. The frog comes with a doorbell button within his mouth. Frankly speaking, it will take your guests some time to understand where the doorbell is. The detail is cast in solid bronze with an antiqued finish; it offers extremely easy installation and was created in Pennsylvania.