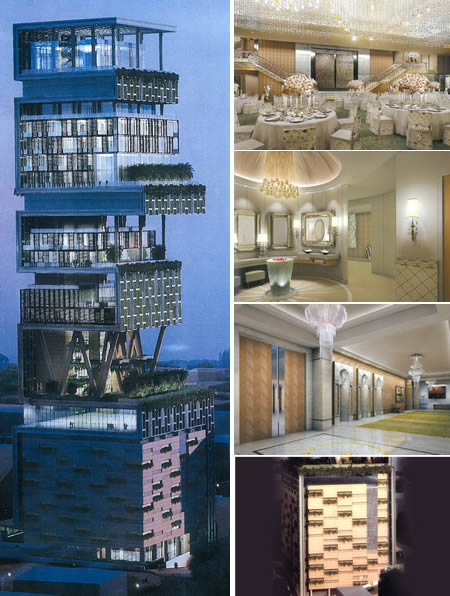 Mukesh Ambani, the fifth richest man in the world and head of the Mumbai based petrochemical giant Reliance Industries is estimated to be worth somewhere in the region of $43 billion. He is also the owner to-be of a 27-story skyscraper in downtown Mumbai that is to cost him colossal $2 billion! His wife Nita Ambani was staying in the Mandarin Oriental in New York and was so impressed with the interior Asian style decor that she wanted something similar for her to live in. What resulted from that is the world's largest and most expensive home ever. Every story in the Antilla's skyscraper home will be built to a different specification. The vast variation of materials to be used in its build has tremendously added to its overall cost. The meticulous planning that has gone into this architectural design is astounding and once the 27 -story tower is built it will certainly become a spectacular site for all eyes. Hirsch Bedner Associates are the designers behind this project.

2Updown Court, England - The most important private residence to be built in England since the 19th century ($150 million) 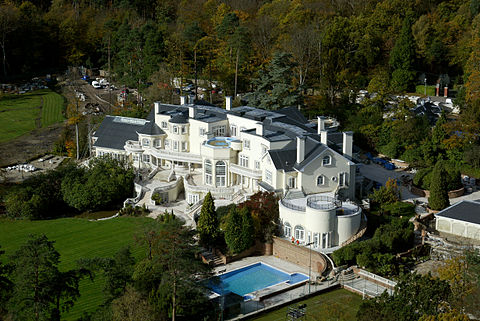 Updown Court is situated only 25 miles from London, and through a pair of large sophisticated iron gates, one can see a palatial construction of immense scale and beauty. The property, however, is best known for its price tag: more than 85 million British pounds (+$150 million U$, with 103 rooms, five swimming pools and 24-carat-gold leafing on the study's mosaic floor. There's a squash court, bowling alley, tennis court, 50-seat screening room, heated marble driveway and helipad. Eight limousines will fit in the underground garage. Then there are the neighbors, who include the queen (at Windsor Castle) and Elton John. It is listed with Savills and Hamptons International. So, even if your blood doesn't run blue, with enough green you can still live near—and like—royalty!

3Versailles, Florida - The largest family home ever built in the US 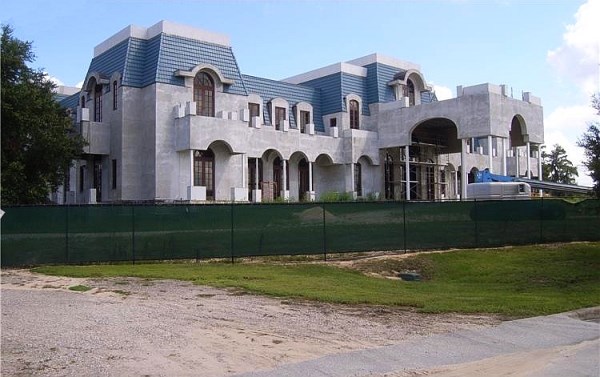 This 30 bedroom mansion boasts its own bowling alley, roller skating rink and Olympic sized swimming pool to make it the largest family home ever built in the US. Time share mogul David Siegel and his former beauty queen wife Jacqueline began building the huge estate three years ago. But with almost 18 months of work still to be carried out on the property they have put it on the market at $75m. Experts believe a further $25m needs to be spent before anyone can move in.

As well as 30 bedrooms the home would have 23 bathrooms with spectacular views over Lake Butler, about 20 miles from Orlando. The hand-built windows for the house cost more than £2m and other luxuries include a ballroom and a children's theatre. There is a garage with enough space for 20 cars, three swimming pools, a large boat house, formal gardens, and a one-story gatehouse with an apartment. There is also a baseball field, two tennis courts, a 60 foot by 120 foot Grand Hall with a 30-foot stained glass dome, two grand staircases, a 37 foot by 30 foot kitchen, 10 satellite kitchens, a two-story wine cellar and a rock grotto with three separate spas behind an 80-foot waterfall. All 23 full bathrooms have full-sized Jacuzzis, 160 tripled paned windows and Brazilian mahogany French-style doors that alone cost pds2.million.

The property was called Versailles as the entrance was modeled after the Palace of Versailles in France. 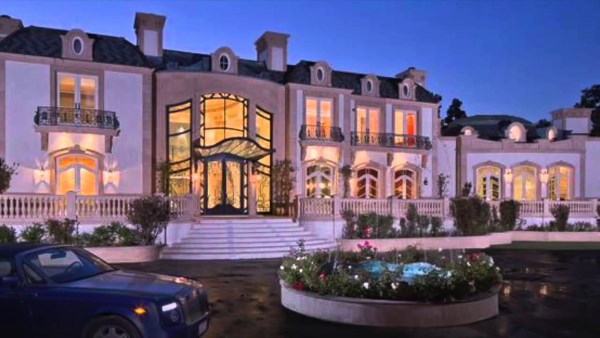 For the woman with the most expensive pair of legs, it was only fair she also had one of the most expensive houses in the world. Mariah Carey apparently had no problem scraping together a nice down payment on this palace in Beverly Hills. The Fleur De Lys is among the world's most expensive estates with an asking price of $125 million. Maria Carey's new digs were built by a Texan billionaire on 5 acres; it is 41,000 square feet of pure diva luxury and will also be modeled after the most extravagant home of its time: the Palace of Versaille, the former home of Marie Antoinette. Surrounding the mansion are rolling lawns, ornamental gardens and mature trees, a 3,000-square-foot manager's house, staff quarters for 10 people, a spa and pool with a pavilion, a championship tennis court, and a lavish garden folly. 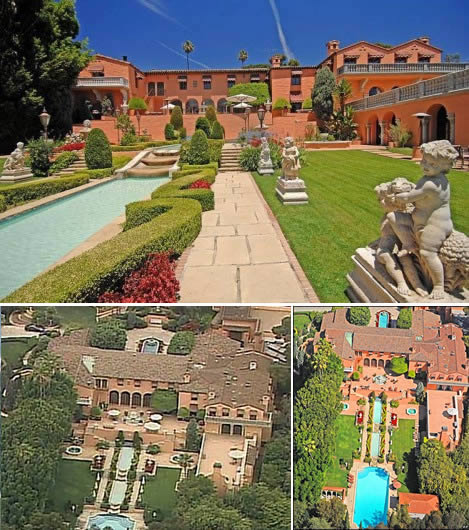 This Beverly Hills mansion has been advertised for sale at $165m (£81.4m), making it one of the most expensive residential property listed in the US. The former home of US newspaper tycoon William Randolph Hearst has 29 bedrooms, three swimming pools, tennis courts, its own cinema and a nightclub. He has decorated the property with statues brought north from his famous Hearst Castle in San Simeon and with life-size paintings of Davies. Mr. Hearst bought the H-shaped mansion in 1947 for about $120,000. In 2007, the estate's current owner, who bought it in 1976, put the home on the market for US$165 million. The home's buyer will have some notable neighbours, including Tom Cruise and Katie Holmes and David and Victoria Beckham.

Frank McKinney, known as the real estate “artist,” has built a 15,000-square-foot “eco-mansion.” Is that possible? I am not sure whether to look in awe at all the sleek green that money can buy, or to recoil from the notion that 15,000 feet of excess is environmentally friendly. Inspired by trips to Bali, Fiji, Tahiti and Hawaii, the three-story, 15,000-square-foot, 7-bedroom, 11-bath mansion features floating sun terraces, a waterfall spa with a fire feature in the water and an arched aquarium wet bar. Green features inside the one-off mansion include enough solar panels to cover a basketball court generating enough energy for two or three average-size homes. A water system that collects enough run-off water to fill the average swimming pool every 14 days and environmentally conscious lighting reduces electricity consumption by 70 per cent. There is enough reclaimed wood to save 10.5 acres of Brazilian rain forest.

But, still, do the words “green” and “mansion” go together?

7Villa Leopolda, France – The mansion that caused a man to lose a 75 million deposit 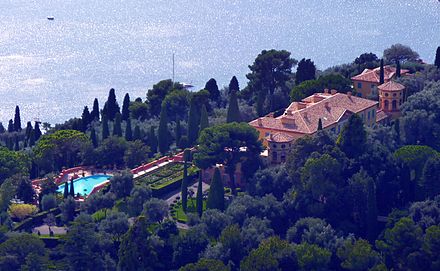 The magnificent $750 million Villa Leopolda in Villefranche-sur-Mer was built for King Leopold II of Belgium in 1902. The estate is so big that it requires 50 full time gardeners. The grounds cover 20 acres of garden and visitors can stroll amongst 1,200 olive, orange, lemon and cypress trees. In 2008, owner Lily Safra (wife of the deceased Syrian (Lebanon-born) businessman Edmond Safra), a famous Jewish philanthropist, decided to sell it. Russian billionaire Mikhail Prokhorov intended to buy it. After making a ten per cent down-payment, he then backed out of the sale after the global credit crunch hit. But a court in Nice later ruled that he had to forfeit the $75 million deposit he put down for the mansion. Prokhorov had signed a sales agreement for the Villa, and French law stipulates that purchasers lose their deposits if they pull out after such an agreement has been executed. But don't feel sorry for the guy, he is still worth a cool $17.85 billion. 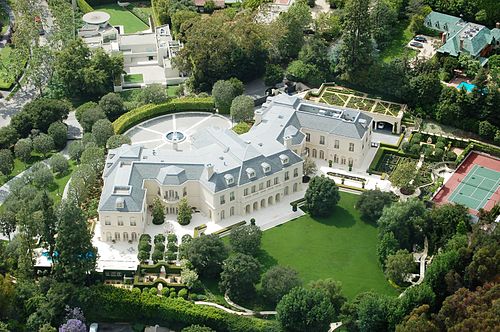 His wife Cindy dubbed Aaron Spelling's 56,000-square-foot LA mansion “The Manor”. Built for him in 1991 it has 123 rooms for his family to choose from. Nothing was spared in the creation of this home, with an indoor skating rink, multiple pools, three kitchens, sports courts, private orchard, and a bowling alley. Not happy with the “norm” for these mansions, there are also more unusual additions, such as a doll museum, a room used exclusively for wrapping presents and an entire floor dedicated to closet space. In 2007 Candy Spelling, estranged mother of Tori Spelling, decided that her 57,000 square foot mansion was just a tad bit large for her and her pooch and decided to sell it and turned the mansion into the most expensive estate (in terms of current listings) at that time. 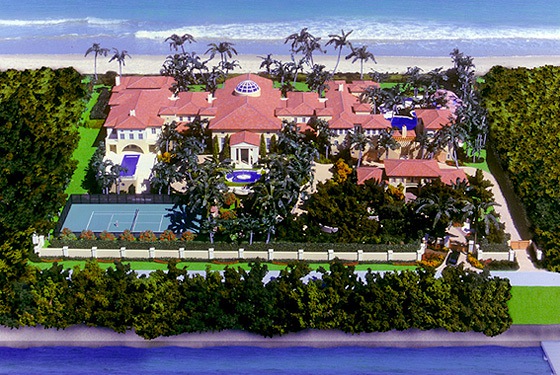 Set upon 5.5 acres, with 520 feet fronting direct Atlantic Ocean-to-Intracoastal waterway property, The Manalapan Residence triumphantly blends Old World elegance and classicism with 21st century facilities. Some of the amenities of this 3-story ‘beach house' includes 67,672 square feet, 14 bedrooms, 24 bathrooms, 18 car garage, 6,140 sq. ft. master bedroom suite, movie theatre, casino and club room with aquarium wet bar, gymnasium with beauty salon, shark tank, 2 elevators, bowling alley, tennis court and a go cart track. Do you still need more reasons to believe this is the greatest mansion if you want to live in front of the ocean? The only bad thing is its price tag of $135 million. 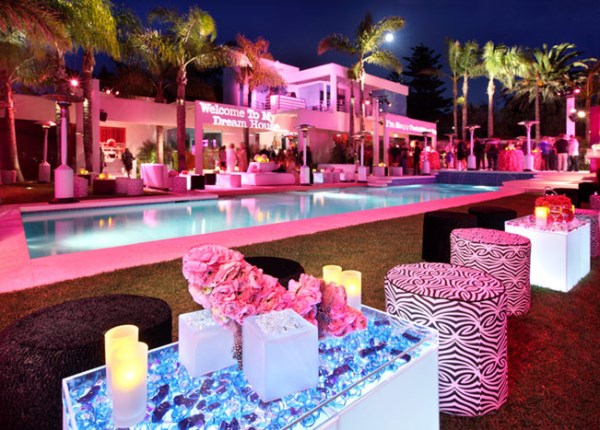 In honor of Barbie's 50th birthday celebration, interior decorator extraordinaire, Jonathan Adler, decked out a real-life 3,500-square-foot pad overlooking the Pacific Ocean to look like the blond doll's outrageous home. He lined Barbie's bedroom with wall-to-wall pink carpeting emblazoned with her initial. The closet is filled with 50 pairs of pink peep-toe heels while her kitchen is stocked with cupcake-making ingredients. An in-house museum features 25 vintage Barbie dolls on display. In the garage? A pink Volkswagen New Beetle with a motorized pop-up vanity in the trunk. Adler's favorite furnishings are hanging in the living room: an original Andy Warhol portrait of Barbie valued at over $200,000 and a chandelier — designed by "Project Runway" contestant Chris March — that's made up of over 30 blond wigs and took more than 60 hours to craft. He also admires a one-of-a-kind black-and-white wall mirror created with 64 dolls. The house is perched on a cliff in Malibu overlooking the ocean. It's a fantasyland for anyone.