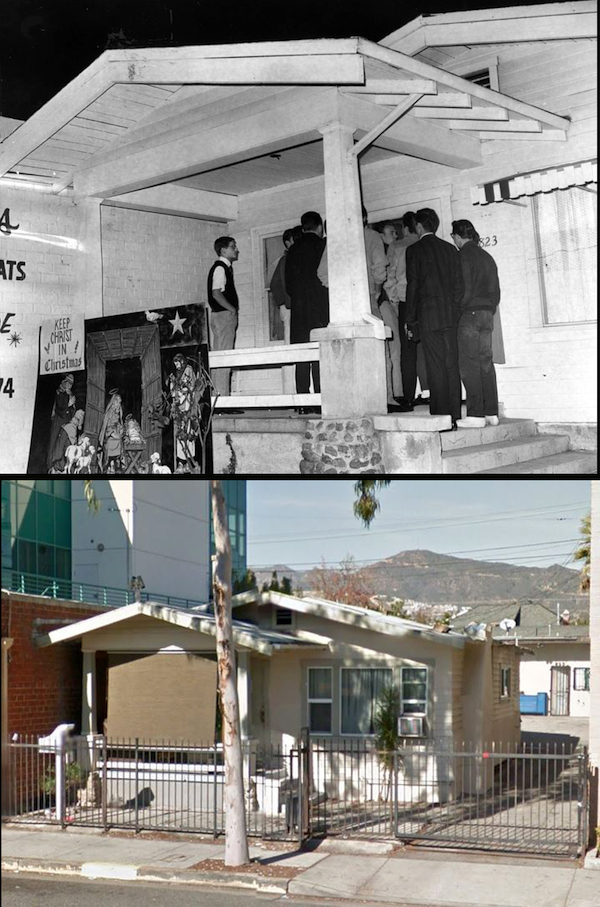 In 1964, this dumpy little house in Glendale, California was the American Nazi Party's western headquarters.

Party leader George Lincoln Rockwell announced that the home was a “center of resistance to communism, Zionism, and race mixing" after it was rented by party captain Ralph Forbes, who had an armed, brown-shirted storm trooper standing guard outside of the home much of the time.

Once the city caught wind of Forbes' intentions, they refused to turn on the electricity unless he signed an affidavit swearing not use the house for Nazi gatherings. He refused and held meetings with party members by candlelight. Property owner Dom Razzano also stepped in and filed a 30-day eviction notice against Forbes, but that didn't do much, as the Constitution protected his tenant's political affiliation.

Eventually, electricity was restored to the house after Forbes agreed to pay commercial rates. A jury found him guilty of violating sections of the municipal building code, but that verdict was overturned a few months later, after the American Civil Liberties Union (ACLU) proved that the city of Glendale had singled out him out for persecution while ignoring other organizations doing the same thing.

While Forbes may have won the battle, he lost the war. Momentum among his peers stalled, and in January 1966, he and his family moved to LA's El Monte neighborhood. 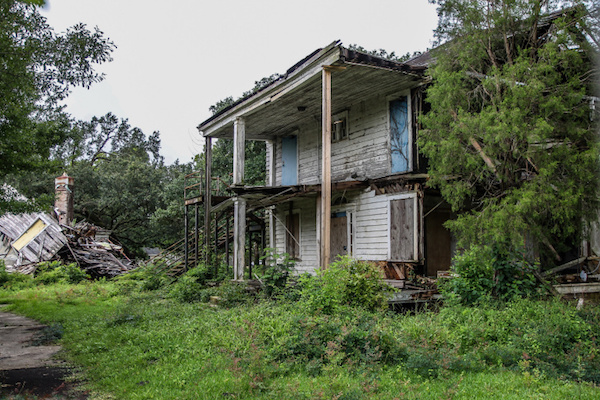 Camp Algiers, a WWII era internment camp in New Orleans, was meant to shelter imprisoned suspected Nazi-sympathizers from Latin America, but many of the detainees were actually Jews.

The camp was established in 1941. According to blogger @abandonedsoutheeast, only a small percentage of those who ended up in the camps had ties to the Nazis, and Algiers became known as "the camp of the innocents."

"Camp Algiers was a former embarkation facility along the Mississippi River that was used as a Nazi internment camp during World War II," he says. "The internees included men, women, and children who had been detained by FBI agents in Latin America and brought back to the United States. But most of the internees were Jewish refugees who had fled Europe from the Nazis. Roughly, only 15% of the 5,000 internees had at one point been members of the Nazi party."

FBI agents were sent to various countries across Latin America to track down and detain suspected Nazis, but it soon became apparent that the program had failed to locate the criminals. However, many Jewish people fleeing persecution in Europe found themselves in the camps. As such, Camp Algiers housed thousands of Jewish immigrants until their release to foster homes in 1943.

Part of the camp is now used by the city of New Orleans and the Department of Homeland Security. 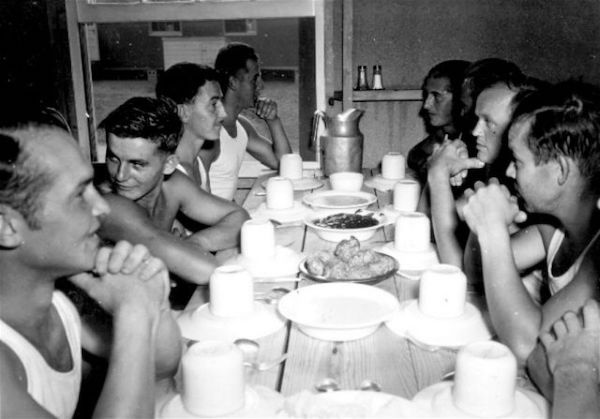 From 1943 through 1945, more than 400,000 Germans who were captured by Allied forces were sent to the U.S. Between 500 and 600 detention centers were set up across the country, but many of the prisoners wound up in Texas because of the available space and warm climate.

During the war, there was a labor shortage due to a large number of enlisted men, so the War Department authorized a program to allow farmers to utilize labor from the camps. The POWs were put to work picking fruit, chopping wood, baling hay, harvesting rice, and picking cotton.

The living conditions for the prisoners were as good as they were for American GIs. In Hearne, Texas, the men had access to cots with clean sheets, showers with hot and cold running water, and plenty of food. They spent their time working or participating in education courses including English language study, theater, orchestra, and soccer. Prisoner attendance was mandatory for newsreel film screenings documenting Nazi atrocities and the American liberation of the death camps.

In November 1945, the detainees began returning to Europe at the rate of 50,000 per month, with the majority of the men first sent to Britain or France to assist the Allied Forces in rebuilding the damaged infrastructure of major cities.

In Hearne, the “Fritz Ritz” has since been restored and opened to tourists who want to see this little piece of obscure American history for themselves. 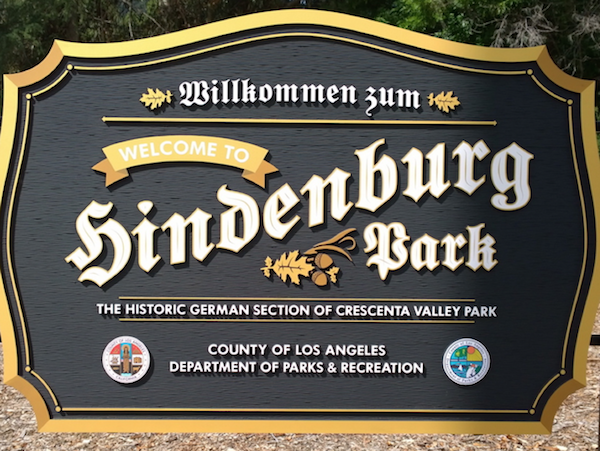 It may have innocently read "Willkommen zum Hindenburg Park," but LA county officials quickly discovered a new sign at the entrance to Crescenta Valley Park wasn't so innocuous after all.

The sign referenced Paul von Hindenburg—a former German president who some argue helped Hitler rise to power. The area of Crescenta Valley Park west of Dunsmore Avenue was owned for decades by the German-American League, who acquired the land in 1925 and named it for the World War I hero and former German president. The county purchased the property in the late 1950s and folded it into the already-established Crescenta Valley Park. The western section of the park was always known to locals as Hindenburg Park, but the sign at the entrance went up in February 2016.

In the 1930s, the park was home to many Nazi rallies and became a meeting place for the Bund, a pro-Nazi group with ties to Hitler. It was one of several recreational areas used by the Bund and also acted as a district site for Camp Sutter, a youth camp of the Jungenschaft movement, modeled on Germany's Hitler Youth.

A few months after the sign went up, the LA County Department of Parks and Recreation had the it removed and approved the creation of a new sign to honor the German-American heritage of Crescenta Valley Community Regional Park. 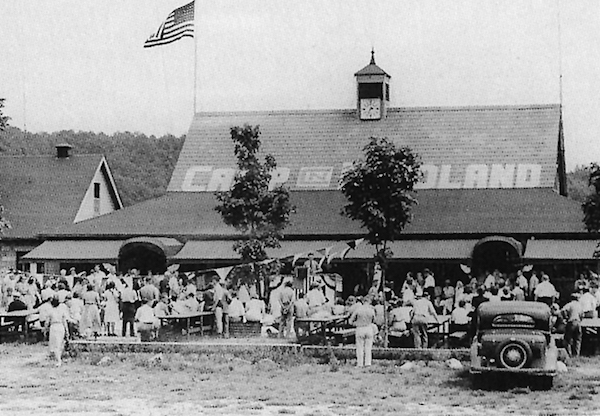 Camp Nordland opened in Andover, New Jersey in 1937. Initially, locals were pretty happy about it—its opening festivities drew 10,000 German-Americans to Andover, a town with a population of 479 people at the time. The out-of-towners patronized local businesses, and the fire department even raffled off a car at the camp's opening ceremonies. As it was during the Great Depression, the flood of money led locals to tolerate the Bund, whose members wore swastikas and military uniforms.

Within just a few years, that tolerance would dissipate. Besides their ideologies, some Bund activities at the camp garnered bad publicity. One leader was arrested in Brooklyn for sexually molesting two high school girls at the camp. Another teen testified that she and her friends were served liquor at the camp's bar, leading the town to deny renewal of the establishment's liquor license. Bund leader Fritz Kuhn was also under investigation for misappropriating funds from the organization, and the IRS was keeping an eye on the group as a whole.
After a while, the Bund desperately wanted to rebuild their all-American German image of years past. Their solution was to invite the Ku Klux Klan to Camp Nordland for a joint rally. (Not the best idea, obviously.)

In 1941, the New Jersey legislature revoked the charter of the German-American Bund Auxiliary, the owner of Camp Nordland. The sheriff's office confiscated Nazi-related material for the FBI before padlocking the place as a public nuisance. Camp Nordland never opened again. The place is now part Hillside Park in Andover. 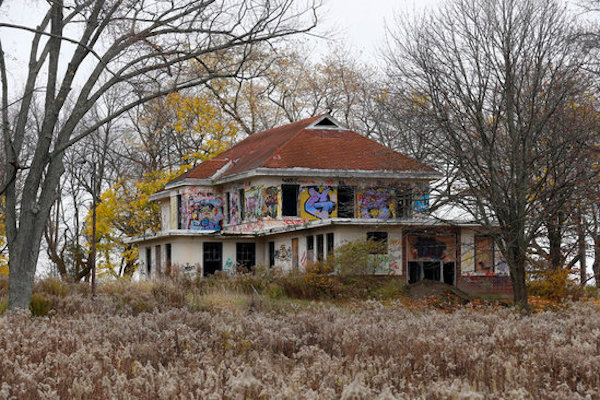 Camp 30, a former Nazi POW Camp, sits on the outskirts of the small town of Bowmanville, Ontario. It was the first of its kind and was the only one used by Allies to house high-ranking Nazi officers captured during World War II.

The Allies felt that Bowmanville was the perfect location to house the dangerous high ranking Nazis—it was far enough away from Europe and in a rural location away from Canada's main cities. Placing POWs here rendered them worthless to the war effort, which was seen as a great victory.

In 1942, the prison camp was the site of the "Battle of Bowmanville," in which prisoners rioted with baseball bats and hockey sticks in protest of a plan to shackle them as a reprisal for the chaining of Canadian soldiers captured by the Germans at Dieppe. The battle lasted three days, during which a Canadian guard had his skull fractured, and 400 prisoners barricaded themselves in a hall. A group of students at a nearby commando course in Kingston, Ontario arrived on Canadian Thanksgiving and subduing the barricaded prisoners with fire hoses and tear gas.

Camp 30 was declared a Canadian National Historic Site in 2013, and the Municipality of Clarington, where it's located, is looking at ways to restore it. 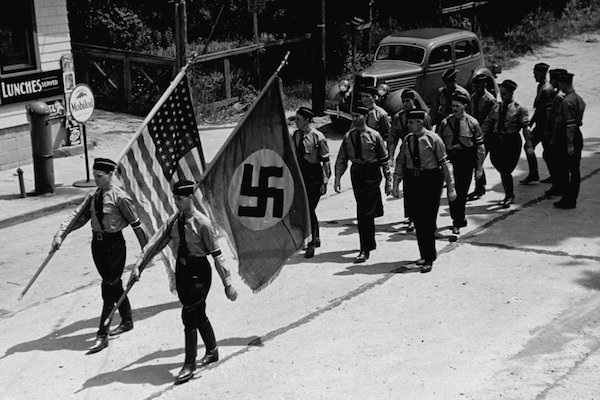 The German American Settlement League is now being forced to end policies that limited ownership of bungalows in Yaphank, New York to people of German descent.

The organization has settled an anti-discrimination case brought by New York State. The 40 homes are located in an area where Nazi sympathizers once proudly marched on streets named after Hitler and other Third Reich figures.

The property was once part of Camp Siegfried on eastern Long Island which welcomed tens of thousands to pro-Nazi marches in the years before WWII. The camp, where the homes stand today, was sponsored by the German-American Bund to promote Hitler. 40,000 people had once attended the annual German Day festivities at Camp Siegfried.

State investigators found that the league prohibited public advertisement of the properties for sale. Members seeking to sell their homes could only announce a listing in person at member meetings or through internal flyers and meeting minutes circulated to the existing membership.

8The abandoned Nazi headquarters located in the Santa Monica mountains 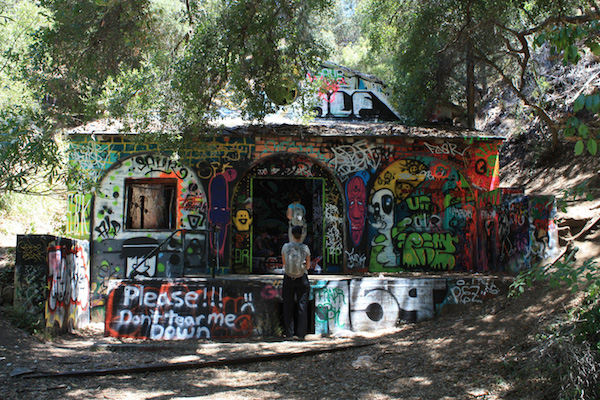 A secluded 55 acre stretch of Rustic Canyon in LA's Santa Monica Mountains has a storied past.

In 1933, the property was bought by one Jessie M. Murphy. That's a fake name—the property was really bought by an heiress named Winona Stephens and her husband, Norman, who purchased the place while under the influence of a German named Herr Schmidt who claimed to have supernatural abilities.

The Stephenses sunk roughly $4 million into the property after Schmidt had convinced them that Hitler was going to take over the world and that the U.S. was going to collapse, so Nazi sympathizers needed a stronghold for when it was time to emerge and take control. The couple ran out of funds before they could complete their fortress, but ended up with a terraced mountainside for agriculture, a sprinkler system, a 20,000-gallon fuel tank, a power station that could support a small town, and a 395,000-gallon concrete water tank.

Schmidt's dreams of world domination ended the day after Pearl Harbor in 1941 when federal agents raided the compound, and he was arrested as a spy. The Stephenses remained on the property until it was sold in 1948 to the Huntington Hartford Foundation, which turned the land into an artists' colony. In early 2016, many of the ranch buildings were demolished, but a few remain, including the powerhouse, and an all-concrete building that once contained the diesel generators.