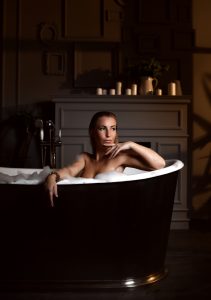 A British Instagram star, Belle Delphine, has come up with a new, kind of gross, way to make money. And we’re not just throwing the baby out with the bath water here. In fact, hold on to that bath water…

Ms. Delphine recently gave her 4 Million viewers a chance to buy her $30 dollar bath water. She sold out quick. She posted on the 1st, two photos of herself in a tub in a bathing suit. “I am now selling my BATH WATER for all you THIRSTY gamer boys. Check out the new shop I’m selling stuff for you!! www.belledelphinestore.com,” she posted on Instagram.

It All Started With A Loyal Fan

When Oh Senpai~ saw Ms. Delphine’s post on the third, she said: “What have I done?” She shared a screenshot of one of Delphine’s older post where Delphine says: “Who wants to join me while I bathe in my in dirt lol.” Senpai replied saying: “SELL YOU BATHWATER. LET ME DRINK IT PLS.” Fuzzy replied with a banner that read: “Bottled while I’m playing in the bath ^-^ The really is bathwater… Disclaimer: This water is not for drinking and should only be used for sentimental purposes,” which Ms. Delphine wrote on her shop. Senpai replied saying: “That won’t stop me.”

She Wasn’t Ready For This

Ms. Delphine posted videos on Instagram of her pouring the water all over her self for advertisement. Bottles sold out three days later. She said on Twitter that she hadn’t expected to sell out or “have THIS many baths. “For anybody waiting, don’t be worried if they’re a lil late I’m working on getting them to you as fast as I can!”

One person wrote: “If you buy this you have failed humanity.” While another said: “I have a ton of respect for this girl. She makes money with idiots. Best way to make money, take it from stupid people, make them spend all on this nonsense, plz!” YouTuber Ethan Klain: “Congratulations Belle on all your continued success.” You can see all these and more in her Tweet.