Have you read How Dominoes and Pizza Hut Became What They Are Today: Part One? Because this is part two.

Sales doubles in a month and they struggled to keep up with demand-. They could get orders to the people but they were at capacity within the kitchen. Either way, the Moynihan brothers were not in agreement.

Tom was hard working and dedicated, he wanted his brother to be the same and take the lead as it were.

Carney has another idea to put into his 7 month old business. He wanted to expand. His idea is to open five more location. He wanted to franchise pizza without pizza being an established food yet.

Carney wants to build it across the nation and have it be the biggest restaurant chain in the country.

Side Note about Dominoes and Pizza Hut: Until 2013, Pizza Hut was the world’s largest consumer of kale. They 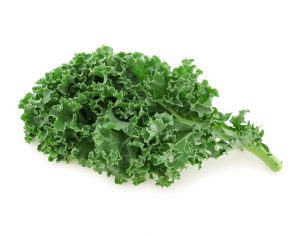 used it as decoration on their salad bars, not for their pizza. As of 1958, Carney brothers are successful but they want to dominate the market from coast to coast.

KFC and McDonald’s had franchised already. And the Carney’s want to use that strategy against them. They wanted long term growth and wanted to do it for pizza what had been done for hamburgers.

The Carney’s quickly launched six new locations. To accelerate growth, they slashed franchising fees in half.

By 1963, Pizza Hut expands to east of the Mississippi with 42 new locations. They had become the largest pizza chain in the country, with no competitor.

But they didn’t know about the brothers from Kansas. DomiNick’s struggles to keep up and are losing orders due to cancellations. There are too many items and options leading to too much confusion on a busy night. Tom made a call to only sell the pizzas and only in two sizes.

Jim wanted to keep the menu intact, but the call had been made, and pizzas it was. Jim was done with the business, so Tom gave him the delivery car in exchange for his half of the company.  (If Jim had retained his stake in the company, he would have made 800 million dollars.)

In 1968, less than 10 years later, Carney has thrust pizza into national 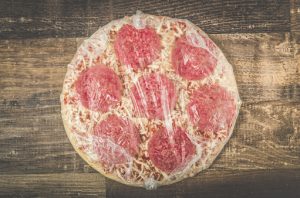 audience. So much so that you could even find frozen pizza in the freezer section at the local grocery store.

At the end of the 1960s, Pizza Hut has 300 locations, selling to over one million customers a year. Pizza Hut is found coast to coast and was the first national pizza chain. The Carney’s did for pizza what McDonalds did for hamburgers.

There was a new system introduced and freeze-dried produce was distributed to all locations for uniform ingredients. It helped to take deep labor out with this strategy.

Meanwhile, Tom Moynihan keeps up with just selling pizza and his business was running better than ever. He came up with another idea. He wants to target college students in Michigan and opens a restaurant at the doorstep of Michigan University. There were 20,000 pupils in admission at the time.

Now a chain restaurant, they had a new logo and new name: Dominoes.

In 1969, Dominoes is opening nearly a store a week. Pizza Hut begins to get nervous.

Another fun fact about Dominoes and Pizza Hut: The first pizza delivered to the white house was ordered by Barbara Bush. She had ordered the pizzas for a party she was throwing for the reading is fundamental program.

With over 100 restaurants on the brink of collapse, Americas first national pizza chain is failing on the east coast. The east coast has their own type of pizza. Pizza Hut’s thin and crispy pizza simply wasn’t pizza to them.

Pizza Hut decided to offer thin crust and thick crust as options. That was, Pizza Huts can still be the same across the board, with several offerings throughout.

15 years later,  Carney’s back in the kitchen to create some new crusts. In 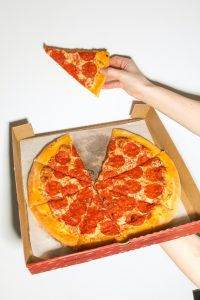 1973, they unveil the thick crust, meant to be a larger than life slice of pizza. Surprisingly, thick crust (which we now know as pan pizza) outsells thin crust.

Back in Michigan, Tom transforms delivery with cardboard boxes, which started as a thin white cardboard box. The grease was creating holes in the boxes and wasn’t insulating the food at all.

Tom came up with corrugated cardboard, making pizza boxes more durable to keep heat in but also they stacked better, for bigger orders.

In 1973, two years after, Dominoes had 17 stores across 13 states. They wanted to go against Pizza Hut as American’s favorite.

Later in the same year, a crazy turn could have happened for Dominoes and Pizza Hut, the Carney’s talk with Tom Moynihan and offer him money so that they can have control in Dominoes stake.

Tom says it’s not for sale. They tell him they know he’s hurting and that he could walk away a rich man. Tom again says no, it’s my baby. The Carney’s tell him they will never stop coming for him.

Tom Moynihan wanted to see it through, he had put in lots of work and he was still young.

Within a couple of years though, in the mid 1970s, Tom finds himself in more and more in debt. Finally, in 1975 there’s a turning point.

Tom offers delivery of pizzas in 30 minutes or less. Or the pizza is free. 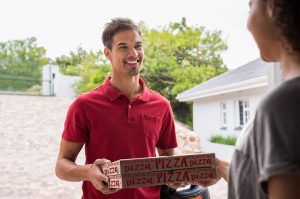 This was huge and unheard of, but he pulled it off. It was a win-win for the customer and franchise wide, made a huge impact.

Dominoes became the best selling pizza in the world thanks to their guarantee. Pizza Hut comes in a close behind with $5.5 billion.

To this day, there are 19,000 worldwide Pizza Huts and 17,000 Dominoes. Which is your favorite between Dominoes and Pizza Hut?