It’s not that strange to find treasure, but it rarely takes a form of a gold-filled chest. Instead, it could be a priceless ancient Chinese bowl at a yard sale or a bunch whale puke on a beach.

A man from California has discovered a different kind of relic altogether. What makes this find particularly impressive is that his find really shouldn’t have remained intact in the conditions it was found in.

Craig Weiss, a Sacramento-based pinball repairman, has found an exceedingly rare 1997 prototype version of the Samurai Shodown 64 tournament fighter videogame. And he came upon it in a box buried under a tree, reported Eurogamer.

Granted, some 20 years isn’t that long of a time in the grand scale of things. But for electronics, particularly computers and computer accessories, it’s more than a lifetime.

Compounding on that, being buried in soil isn’t really the optimal way to store electronics. Moisture, temperature changes, and bugs are all mortal enemies to game systems.

But this thing actually works. Sometimes, people just get lucky. 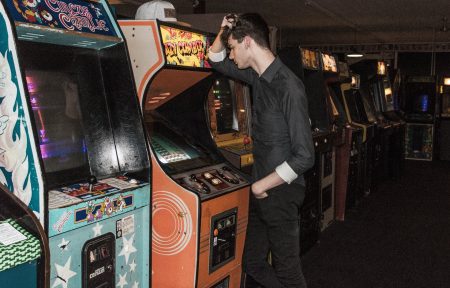 Weiss made his discovery after a client called him to repair a particularly damaged pinball machine. Despite its terrible condition, it was an impressive piece of pinball technology.

Weiss asked the client where she had gotten the machine from. She told him she had purchased it from a lady whose husband had run a pinball and arcade game repair and vendor store in the ‘90s.

Curious whether she would have other rarities laying around from her husband’s business, Weiss contacted the original seller. He was invited to come visit and browse through the inventory.

There, in a field under a collapsed tree, Weiss came upon six pallets of various electronics. When he asked if he could go through them, the woman said he might as well – she was about to send it all to a junk yard anyway.

In the pallets, Weiss came upon a real treasure. They contained warehouse materials from the legendary Japanese video game firm SNK.

Apparently, the woman’s husband had bought the pallets from a Chinese ex-SNK employee. The materials within had once belonged to SNK’s U.S. branch, which shut down in 2000.

Among the other miscellaneous stuff in the pallets was an arcade machine motherboard containing the Samurai Shodown 64 prototype.

Since its discovery, the game and its system have passed to the ownership of video game enthusiast Anthony Bacon. He runs the Video Game Esoterica YouTube channel, covering rare and obscure video games and game systems.

Bacon paid Weiss $300 for the game. This may not have been the most valuable treasure ever found, but from a gaming history standpoint, it’s very significant.

For starters, Samurai Shodown 64 – known in Japan as Samurai Spirits – was originally developed for the failed Hyper Neo Geo 64 arcade system. SNK launched the platform in September 1997, but ended up discontinuing it only two years later.

Weiss’ Samurai Shodown 64 is remarkable because it’s the first time the game has been seen in public. But this is also the first time anyone outside SNK has laid eyes on a development version of the Hyper Neo Geo 64 system.

“Nothing has ever shown up from the development process from SNK with this hardware. So just to start off the top, no-one’s ever seen it before, no-one knew it existed,” Bacon told Eurogamer.

According to Bacon, just the game and its system existing is a miracle in itself. But the fact that it actually works means beating some astronomical odds.

Bacon says that there never were that many prototypes of the Hyper Neo Geo 64 made. He guesstimates – based on photos and development stories – that a single digit number will cover all test units SNK built.

“I can’t say that there’s not another one sitting somewhere. But I would highly presume this is a one-of-a-kind item, never seen before, and probably won’t ever be seen as a duplicate again,” said Bacon.

This unit’s circuit board is numbered 00001. That probably means that it once resided inside the first Hyper Neo Geo machine ever made.

Better than the Official Release

But what about the game itself? Samurai Shodown 64 did actually see the light of day within the Hyper Neo Geo’s short lifespan, and it even got a sequel in Japan.

Bacon said he is a big fan of the game. But having played the prototype, he thinks the published version is actually inferior.

“I actually think it plays better, in my opinion. If I was going to go play one version now, I would play the prototype because I like it better,” Bacon said.

The camera in the prototype, he explained, is closer to the characters than in the published version, which makes the game easier to play. The prototype also contains some game mechanics that were toned down or cut altogether in the final version.

But since the game isn’t a polished retail release, it has some issues. For example, there’s no final boss – after the player beats the eighth stage, the game simply restarts.

“It’s definitely not done. And there’s a lot of fundamental differences,” Bacon concluded.

In any case, it’s a great piece of gaming history, and we’re lucky that it survived for us to see.