Some time ago, we brought you the story of how three spiders shut down a University of Michigan library. But show that story to an Australian and they’ll just laugh in your face.

In case you’re unaware, Australia’s New South Wales is currently experiencing some severe flooding. More than 18,000 people have been displaced by the waters.

But the land is flooded with more than just water. We’re talking thousands, millions of spiders.

Determined not to drown, New South Wales’ wolf spider population has decided to pack up and move. Local resident Matt Lovenfosse described their exodus as a “brown carpet.”

When he first saw the strange mass covering his yard, he wasn’t quite sure what it was. Upon a closer inspection, the truth quickly dawned on him.

“I went out to have a look and it was millions of spiders,” Lovenfosse told The Guardian.

“It’s amazing. It’s crazy. The spiders all crawled up on to the house, on to fences and whatever they can get on to.”

Melanie Williams, from Macksville, also told media that a skittering swarm of thousands of spiders was covering the walls of her house.

“I occasionally see spiders around the place but never anything like that, it was just insane,” Williams said.

Her neighbors felt the need to one-up her, though. They had told her that if she thought her outside walls were bad, she should see the inside of their garage.

Yeah, we’ll maybe take a rain check on that. 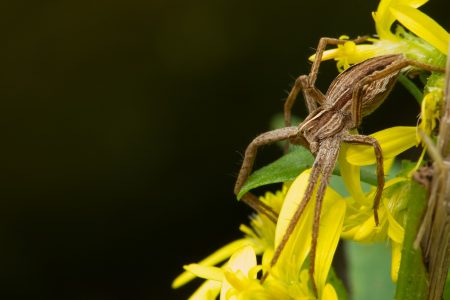 The spiders that are swarming through the land are known as wolf spiders. Wherever you live, except the most frigid north and south of the planet, you’ve most likely seen these things.

They’re the little brown ones that like to run through your yard at a fast speed. The female ones are easier to recognize, since they often carry their egg sacs at the end of their abdomens.

The spiders are mostly harmless. They might give you a bite if you continuously bug them, but despite popular myths, their venom won’t cause anything worse than a bee sting could.

Wolf spiders are actually quite beneficial. Even Williams, whose house is covered in them, thinks so.

“They’re very, very good insect hunters, so if you got rid of all the spiders you would be plagued by insects,” Williams said.

Getting to High Ground

Some people have been wondering why the masses of spiders suddenly spawned when New South Wales’ record-breaking rains started falling. Dr. Lizzy Lowe, an arachnologist with the research company Cesar Australia, has the answer.

According to Lowe, it’s normal for spiders to swarm during floods. The issue is that many times those floods strike when the spiders are at their most plentiful.

“In spring and summer, it’s peak spider time. Many will die off in the winter, or survive as egg sacks. If you get floods in summer you’ll see lots of spiders,” Lowe explained to The Guardian.

“There’s no more spiders than would be there usually. You’re just seeing more of them. Most of the spiders that you’re seeing are ground-dwelling spiders,” she added.

Lowe says that even though the massive carpets of squirming spiders are terrifying, people should try to find some sympathy for the creatures. So don’t just grab the nearest flame-spewing device you can find, no matter how much you want to.

“These are native species trying to do their thing, trying to survive. The last thing that you want to do is get out the insecticide spray,” said Lowe.

She added that the spiders will go their solitary ways again once the waters go down. The problem there is that no one seems to be quite sure when the rains feeding the flood will end.

It’s not the first time spiders have caused mass spectacle and horror in the lands down under. In 2017, another flood caused a strange sight to pop up at a field in New Zealand.

The tall grasses in the field got suddenly covered in a white, silky substance. But that wasn’t some farmer putting down a tarp to protect their crops – it was all spider webs.

When some spiders sense that they’re about to drown, they employ an escape method called “ballooning.” They will shoot a strand of silk up into the air, where it will catch the wind and lift the spider away from the treacherous ground.

But that strand of silk has to go somewhere after the spider detaches from it. And when a million spiders simultaneously fart out their reverse parachutes, the result is a field full of silk.

Again, though, the field of webs was no cause for concern.

“There’s no need to disturb the web,” said spider expert Dr. Cor Vink at the time.

“It’s not there to catch anything. It’s just spiders, wandering around.”