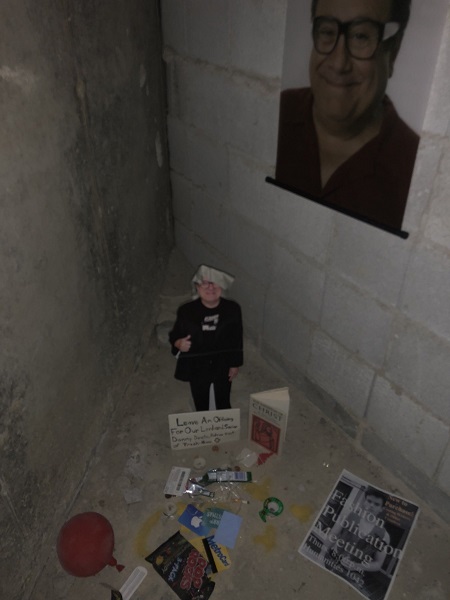 Danny DeVito may well be a Comedic God, certainly worthy of the Pantheon Of Actors. But an upstate New York college has gotten a taste of religion and DeVito’s face is at the center of this hidden DeVito shrine.

Sunday a video was posted to Twitter showing Purchase College students coming across a shrine located in a restroom. The subject of devotion? Danny DeVito.

Behind the metal casing of the towel dispenser hides the entrance to the shrine, dedicated to DeVito. DeVito’s visage adorns the wall and a cutout DeVito stands in the corner, smiling saintly. A message proceeds the cutout, reading “Leave An Offering For Our Lord And Savior Danny DeVito, Patron Saint of Trashmen”, referencing the “It’s Always Sunny in Philadelphia” character DeVito portrays.

The offerings left to the Patron Saint of Trashmen includes a commuter card, package of Pop Rocks, a whoopee cushion, and an Apple iTunes gift card. The offerings lay scattered at the feet of the idol.

The campus itself commented on the shrine, though students declined to tell the press the exact location, citing “it’s confidential”.

“We’d like to say we’re surprised, but our students are well known for their creativity and sense of humor,” the college tweeted. “@DannyDeVito we’d love to welcome you on campus to meet your super fans.”

The subject of devotion himself, Danny DeVito, commented on the shrine on Twitter.

“Your shrine honors me. My heart is filled with love and garbage. Tomorrow, as you may know, is my name day. Do something that makes you feel good. Above all be kind to each other. Pick up trash, recycle, and be aware of plastics in the ocean.”

Truly inspiring words for his young followers. Hopefully, they’ll take it to heart, harkening their Patron Saint’s words and leaving the world a little better place than they found it…