You know, sometimes it’s just better not to know what goes into your food.

If there’s one thing that can scare the cholesterol out of people it’s finding a vile item in their food. And let’s be honest: if you find something in your food that should in no way, shape or form be there, it’s vile. Ordered a hamburger without mayo and it’s on there? That’s okay — it’s a mistake. Ordered a hamburger and you spot a syringe? That’s definitely NOT okay and somebody somewhere really dropped the ball (most likely in a biohazard bin).

Discovering bizarre, unsanitary and altogether disgusting things in your food is as surefire a way to turn your stomach as picturing your parents doing it (you just cringed, didn’t you?).

With that in mind, here are 8 gross things found in food that you can only hope never show up at your dinner table.

Do you know what’s worse than finding a condom in your food? Choking on a condom in your food. A woman took a bite of her French toast that she ordered at an IHOP in Homewood, Ala. when she bit into the prophylactic. The popular breakfast chain denied the charge, but the woman stands by the allegation.

“While consuming her meal the Plaintiff felt something become lodged in her throat, which caused her to have difficulty breathing,” reads a lawsuit filed by the woman that gives some gritty and vidid play-by-play of what took place. “As a result, she ran to the women’s bathroom along with her minor grandson. While in the women’s bathroom the Plaintiff attempted to dislodge the material in her throat by vomiting.” When that didn’t work, she “proceeded to place her fingers in the back of her throat in an attempt to pull out the material.”

Well, that’ll teach ya to order French toast at an IHOP, right?

Dead mouse: popular DJ and, apparently, a surprise ingredient. A woman who stopped into the 7 Bar and Grill in Amarillo, Tex. came across a dead mouse in her salad. Lettuce? Check. Cucumbers? Check? The corpse of Mickey? Uh…check.

To be fair, the eatery acted swiftly in apologizing to the woman, although we can’t imagine any number of gift cards are going to persuade her to come back.

A manager for the restaurant contacted the health department, which did an inspection it passed, while the salad went to a lab to find out what went wrong, as if no one realizes “dead mouse in a salad” is what went wrong.

The manager, meanwhile, stayed in a total spin zone while encouraging the public to come on out. “I just want to let you know, it is completely a safe, clean environment to come bring your family, eat dinner, watch a football game, and enjoy the atmosphere,” he said. How could anyone not believe that?

Unless you’re a fish or still a really big fan of “Fear Factor,” chowing down on worms is not appetizing.

A woman in Detroit bought some cod at Whole Foods only to notice a worm on it while she seasoned the fish. She didn’t know if it was dead or alive (does that even matter?), but she did see parts of it spread throughout the cod.

Whole Foods said the creature is a nematode, adding, “Nematodes are naturally occurring parasitic roundworms that affect small percentages of fish. They are not harmful when the fish is cooked property to an internal temperature of 140 degrees.” Safe or not, Whole Foods refunded the money.

You can’t really blame the woman for getting upset, either. Who’d want to swallow something called a “nematode?” Heck, it’s got the word “toad” in it.

Okay, cue up the “finger food” jokes. A 14-year-old boy in Jackson, Mich. took a bite of his roast beef sandwich from Arby’s only to discover he had bitten into a human finger. Perhaps not so coincidentally, an employee had cut her finger on a meat slicer and was replaced by some co-workers who were not aware there was an accident and that a finger may have been on the loose.

One witness said “The piece appeared to be the back of a finger, including the pad and extending beyond the first knuckle.”

The Arby’s in question later cleaned the establishment top to bottom, while the boy was “traumatized” over the unusual topping. And no, we don’t know what finger it was, not that it matters because you can bet the boy didn’t give the sandwich a thumbs up.

This Will Really Bug Ya 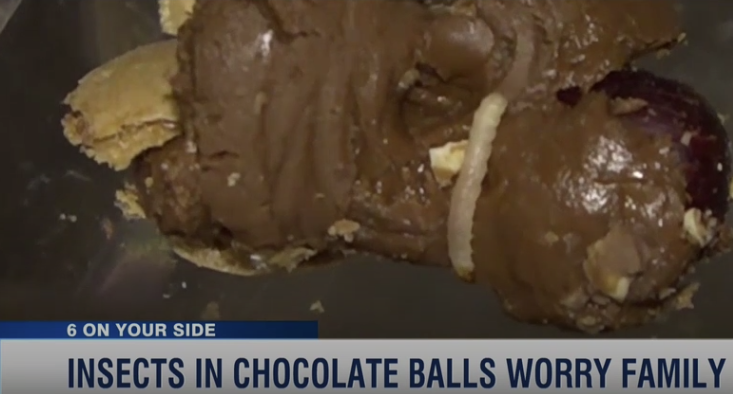 Insect larva? Um, no thank you.

A family in Omaha, Neb. got more than just chocolatey goodness when it opened a Ferrero Rocher chocolate ball purchased at Walmart and bit into it, only for worms to come pouring out of it like gasoline from an unattended pump.

It turns out the little critters were Indian Meal caterpillars, so, if you want to be literal about the whole thing, they should’ve probably been better suited in a pot roast or casserole.

Ferrero Rocher addressed the snafu in a statement, which said, in part, “Rare occurrences of infestation have occurred in Ferrero Rocher, similar to other chocolate and food products whose packaging makes them more vulnerable to infestation. Pests can penetrate nearly any type of confectionery packaging on the market today, except glass or metal.”

Lesson learned: only get chocolate sold in Coke cans. 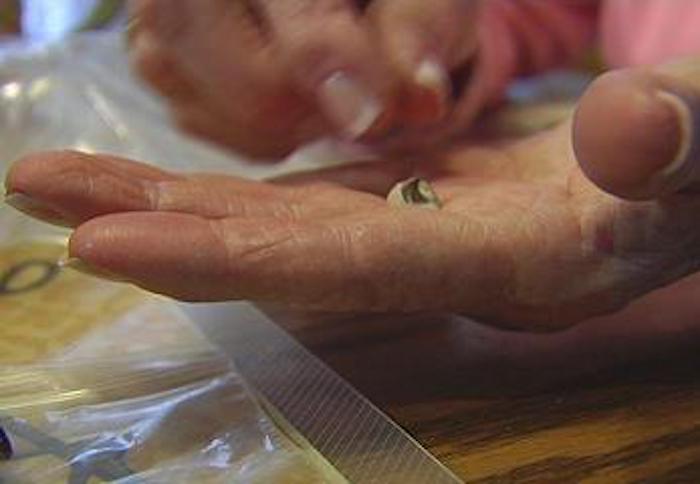 We’ve all heard that candy is bad for your teeth, buy who knew it was for this reason?

A woman in Brownsboro, Tex. bit into a tooth that was lodged in a Milky Way bar she was eating. It’s unclear if it was a human or animal tooth.

None of her teeth were damaged and she elected not to mail it back to Mars, which owns Milky Way, out of concern the company would hold onto the evidence.

Mars did the next best thing, if that’s actually possible, when it offered her coupons for free candy bars, as well as a letter of apology. Still, she probably didn’t break into a whole box of Fun Size bars come Halloween. “Every time I think about it, I kind of get sick to my stomach because I don’t know what kind of mouth it come out of,” she said.

Mars released a statement, which said, in part, “All Mars products are manufactured and tested through a series of strict processes, based on recognized international standards.  We remain confident in the quality and safety of our products.”

Fried chicken is awful for you, but it’s okay because it’s so good. Except when, you know, you find a lung in it. An Australian man who ordered three pieces from KFC got a bonus part: a lung. He took a bite of some bird and spotted something not quite right. When he told employees, they said it may be a lung. What’s more surprising — the fact a lung was in some fried chicken or employees at a KFC are smart enough to know what a lung even looks like?

The restaurant didn’t offer a refund, electing instead to tell the man to contact customer service. We’re guessing he would’ve had to bite into a spleen or an intestine for him to get his money back.

In the end, KFC said it most likely was a chicken lung or kidney that was never removed. The man, meanwhile, said he’ll never eat there again. So, score one for Bojangles.

Maybe organic isn’t the way to go. A woman who bought organic grapes at a grocery store in Epping, N.H. may be thinking just that after she claims a black widow spider was mixed in with the fruit.

“As I washing some of the grapes in bunches, I noticed there were some cobwebs,” she said. “I started getting a little paranoid since I’ve heard stories about spiders in grapes, so I picked up the bin and there it was: a big, huge black widow spider at the bottom of the container.”

The woman’s husband played the part of gallant hero by killing the arachnid. No one was hurt.

The woman has no interest in cashing in on the incident. The store offered a refund, but she declined, saying she merely wants to make sure nothing like this happens to another family.

That’s pretty nice, but we’re betting it’s a totally different response than the one she’d have if the spider had managed to bite someone in the house.