Most of us remember the grandpa that dropped his grandchild from the cruise ship to her death. And now, that grandpa has been charged with negligent homicide. “I saw her fall the whole way down. I think for a while I was just in shock,” Salvatore Anello said of his 18-month old granddaughter, Chloe.

He has said he “thought there was glass” on the open window where the child fell to her death. Anello was charged by Puerto Rican authorities in October regarding the July death of Chloe Wiegand.

The interview aired Tuesday and Anello shared his disbelief when Chloe fell from the open window he thought was closed on the 11th story of the Royal Caribbean cruise ship on July 7th in Puerto Rico. He said he thought he placed Chloe in a safe place.

The grandfather had often lifted the child and held her up to the glass at her older brother’s hockey games so that she could bang on the glass, the family from South Bend Indiana, has said.

He described Chloe as a “perfect little girl.”

“I remember trying to find her on the floor and then I saw her fall. I saw her fall the whole way down. I think for a while I was just in shock.” 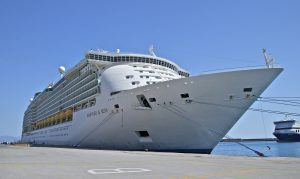 He recalls thinking that Chloe had fallen in front of him in the ship, and that he didn’t realize she had in fact slipped out the window until it was “too late.”

“If there was some kind of warning sign there, we wouldn’t have ever been near it,” he said about the window. He admitted that he was color blind and that that may have impacted the fact that he couldn’t tell the difference between the tinted closed windows and the open window from which his granddaughter fell from. He says that the cruise shop is partially to blame for the fall.

“I just want them to fix the boat,” he pleaded in the interview.

The incident took place in San Juan in October, when the cruise ship was docked. Puerto Rico’s Justice Department arrested Anello with a charge of negligent homicide when the incident occurred.