“(He) stated that the night of Sept. 23, 2021, he believed the victim was possessed, as she would cry and scream, and he believed she was in pain. At one point during the night, while the victim was standing, he placed his hands on the chest and back of the victim and applied pressure. In the early morning hours of Sept. 24, 2021, (Rene Aaron Hernandez Santos) and (the victim’s mother) took the victim to the church located at 1094 South 2nd St. While at Church, the victim was placed on the ground in front of the altar. In the afternoon, (the pastor) arrived. All three continued praying. During prayer, the victim would be picked up and held by each of the three defendants. Around 7 p.m., (Rene Aaron Hernandez Santos) knelt down beside the victim who was lying on the floor, and he placed one hand on the victim’s chest and one hand on her back. He applied pressure to the victim and maintained pressure for 10 minutes. He stated the victim was alive at the beginning of this and he closed his eyes to pray. Upon opening his eyes, he believed the victim had died. They continued to pray and did not perform any lifesaving measure for the victim.” 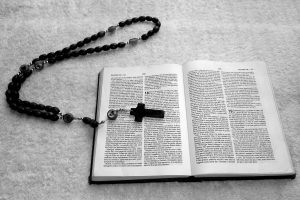 The uncle backtracked on his previous story in later police interviews as well. “In a subsequent interview, (Rene Aaron Hernandez Santos) substantially revised his previous statements. He stated he never placed his hands on the check and back of the victim and applied pressure. He also explained that after they believed the victim had died, he attempted breath to breath (mouth to mouth) with the victim,” court documents state.

The mother, Claudia Hernandez-Santos, uploaded YouTube videos of herself talking about her daughter’s death. “Everyone wants to know what happened to her, you know, her cause of death. A lot of people turned on me after my daughter passed away,” she said in the video.

She doesn’t blame herself, or the alleged exorcism for her daughters death, instead saying, “God took her.”

All three are behind bars in Santa Clara county jail, without bail. We hope justice is served. RIP Arely