Have you ever thought dating is way too difficult? Well, at least you don’t (usually) have to worry about him defecating all over you or her ripping your face off.

But in the animal kingdom, both of those possibilities are roughly just as likely. But the scariest part is that the other party just might be into it.

Here are six animal courtship and mating rituals that will have you re-evaluate what you consider a bad date.

In the human world, you might put on a bit of perfume or cologne if you want to smell nice for your partner. Hippos do that too — kind of.

But instead of dabbing on some cologne, the male hippo will waltz up to a shapely hippo lady and take a big, mean dump. For his next trick, he will urinate all over the pile of crap.

Finally, he’ll squeeze out the loudest, stinkiest fart he possibly can. This is all in the hopes that the female hippo likes how he smells.

If she does, things don’t get much better. A receptive female will respond by using her tail to shower the male in her s***.

Acrobatic sex is a niche kink for us, but for bees, it’s just how things are done. When a new bee takes flight, the male drones will fly after her.

The lucky ones will then mate with her while still in flight. And they really are lucky, since most drones never get to bang.

But even those that do never do it more than once. That’s because orgasm is a death sentence to a male bee.

When he blows his load, he also literally blows his penis off and tears his abdomen apart. The queen holds on to the severed genitals while the drone falls to the ground, dead.

3) Prairie Voles Stay Together Forever — Unless the Male Gets Drunk 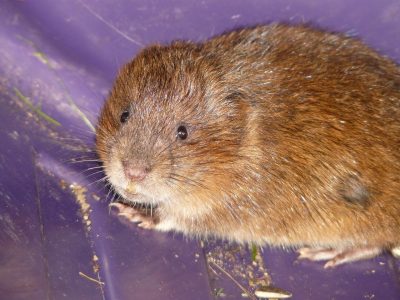 Picture a monogamous animal, and you probably start thinking about swans. But prairie voles leave both swans and humans to shame.

These tiny rodents mate for life and they spent up to 60% of their daily lives together. They’re even capable of noticing if their partner is unhappy or stressed, at which point they will shower them in little vole hugs and kisses.

And a strange vole of either sex propositions to the couple, they will drive the intruder away together. Unless the male is drunk.

Researchers have found that when female voles get tipsy, they will seek more attention from their partners. Male voles, on the other hand, become womanizers when they get smashed.

They say the way to a man’s heart goes through his stomach. With nursery web spiders, you flip the gender assumptions.

When a male nursery web spider tries to woo a lady with eight legs that go all the way up, he’ll bring her a snack. He’ll wrap food in his own silk and present it to the female spider.

That’s really cute, right? Of course, since they’re spiders, the food in the bouquet is a bunch of dead insects.

If the female accepts the proposition, she’ll start devouring the gift, giving the male a chance to mate with her. But some males occasionally try to get sneaky.

Researchers have found that instead of food, some males try to fool females with a silk-wrapped stick. It may even work if the wrap is nice enough — right up to the point where she tries to eat it.

That’s when she’ll immediately kill and consume the male. Really, he had it coming.

5) Sneaky Octopuses Cross-Dress to Get Some

With the octopus Abdopus aculeatus, there are two types of males. Type one relies on brawn. He’ll jealously guard his female mate and attack any other males who dare to get too close.

Type two, however, believes in the supremacy of the brain. He knows the Type 1 male would kick his ass, so he does something sneaky — he disguises himself as a female.

Since the Type 1 male will now pay him no mind, he can nonchalantly sneak by him. He’ll then enter the female’s nest and have his way with her.

But it’s not just the Type 1 male the sneaky lover has to disguise himself for. If a strange male snuck into her nest, the female would most likely cannibalize him.

She seems to be down for some female attention, though. But hey, if that’s what floats her tentacular boat.

The Mexican whiptail lizard has the most boring mating ritual in the world. It simply doesn’t have one because it doesn’t need to have sex.

These lizards are bizarre in that they’re all female. Yet they’re still able to have babies and maintain their genetic diversity.

The whole species emerged from the hybridization of two other lizard species. Consequently, the Mexican whiptails have twice the chromosomes of other lizards.

This gives them the ability to get themselves pregnant. But they still sometimes engage in simulated humping with each other, which actually makes them produce more offspring.

Scientists aren’t exactly sure why that is since both lizards are ladies and there’s no actual sex. The only explanation we can come up with is that one of them says: “That was so good, I feel like I should get pregnant!”