A town in Texas ended 2021 on a truly bizarre note. In Texarkana, on the border between Texas and Arkansas, rain started falling on December 29.

But in addition to water, the sky poured down something completely unexpected. Namely, fish.

For several minutes, fish dropped down from the clouds all over the city. Most of them measured around four to five inches in length, and a good number of them appeared to be young white bass.

The weird event took place in the late afternoon. James Audirsch, a local who works at a used car dealership, told WCIA that he was at work at the time.

Suddenly, he and his coworker Brad Pratt started hearing strange noises from the outside. Curious, Audirsch ventured out into the rain to explore the mystery.

“There was a loud crack of thunder and when we opened up the bay door, I looked outside and it was raining real hard and a fish hit the ground,” said Audirsch.

“Fish were droppin’ here and everywhere,” he added.

According to Audirsch, there were fish all over the dealership’s parking lot. Not only that, some of them had fallen onto the street and the tire shop neighboring his workplace.

Audirsch wasn’t the only one who witnessed the fish rain. Hundreds of Texarkana residents took to social media to express their astonishment. 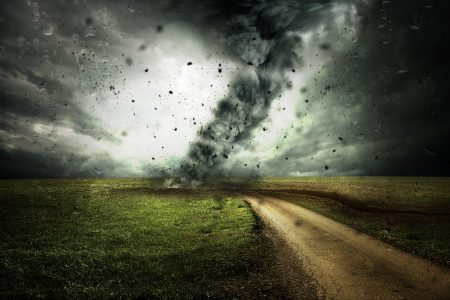 This story sure sounds like a tall tale, and we couldn’t blame you if you didn’t believe it. The city of Texarkana is aware of that, but on their Facebook page, they insist that the event really happened.

“This isn’t a joke,” the city officials wrote.

Indeed, while fish falling from the sky is bizarre, it’s actually not all that rare. Science-y folks have even figured out how it happens.

The phenomenon is generally called “animal rain.” It takes place when tornado-like waterspouts or updrafts happen on the surface of a body of water.

These drafts can suck up small animals from the water and pull them up into the sky. They’re often fish, but we know that frogs, crabs, snails, and other aquatic creatures have also rained down on Earth.

“I’ve seen small ponds literally emptied of their water by a passing tornado. So, it wouldn’t be unreasonable for frogs, or other living things, to ‘rain’ from the skies,” Purdue University professor Ernest Agee told the Library of Congress.

The animals will stay in the updraft until it runs out of steam and dissipates. In the most extreme cases, the winds could transport the animals miles and miles away from their home.

Once the wind dies down, gravity takes over and the animals fall to the ground. And there you have it — a rain of frogs, fish, or whatever else was up in the clouds.

A Tale as Old as Time

As we said, fish rain is weird, but it happens surprisingly often. A similar episode took place in the town of Oroville, northern California, in 2017.

A storm cloud hovering over an Oroville elementary school released its payload. And, of course, the pupils just happened to be outside on recess and got pelted by dead or dying fish.

The teachers at the school initially thought the fish incident was some kind of a prank pulled off by mischievous kids. But nope, it was just good old-fashioned fish rain.

Meanwhile, in 1947, a Louisiana Department of Wildlife biologist A.D. Bajkov and his wife were enjoying breakfast at a restaurant in Marksville. All of a sudden, one of the waitresses told him that fish were dropping from the sky outside.

“There were spots on Main Street, in the vicinity of the bank (a half block from the restaurant), averaging one fish per square yard. Automobiles and trucks were running over them,” Bajkov said at the time.

“I personally collected … a large jar of perfect specimens and preserved them in Formalin, in order to distribute them among various museums.”

A rain of fish and frogs seems like a biblical plague, and appropriately we have records of animal rain even from those times. In the first century CE, the famed scholar Pliny the Elder documented storms that flung sea life all over the Roman Empire.