Imagine you’re reading the morning newspaper and you hit the classifieds section. Or if you’re too modern for that, maybe you’re on Craigslist. Suddenly, you notice a strange ad. A Wild West town for sale, lightly used, comes with a saloon.

Alright, that’s an exaggeration, but it’s not too far from reality. For the meager price of $7.5 million you could become the owner of Mellonsfolly Ranch, a Wild West resort town that recently went up for sale in New Zealand.

The town features ten period-appropriate buildings, such as a hotel, one private residence, two rental homes that can house up to 22 people, a courthouse that doubles as a movie theater, a sheriff’s office and – as the finest feather in this proverbial headdress – a fully licensed saloon, CNBC writes.

Additionally, the resort hosts a burgeoning Manuka honey business that in 2019 produced 15.5 tons of honey. Doesn’t sound like a bad deal at all.

Mellonsfolly Ranch opened in 2006 on a 900-acre plot near the town of Raetihi on New Zealand’s North Island. The concept is the brainchild of cowboy enthusiast John Bedogni, who built it as a tribute to a 1860s Wyoming frontier town.

Rob Bartley, the current owner, bought the town off of Bedogni in 2012 for NZ$8 million ($5 million). He told Bloomberg that Bedogni originally built the town for his friends and to host private events.

“Obviously, he is very much a cowboy enthusiast. The whole town was drawn by him, and every inch of it is genuine,” he said.

Construction of the cowboy town started in 2002 and finished in 2006. The resort is filled with objects and doodads that Bedogni and his wife brought with them from their expeditions to the U.S. 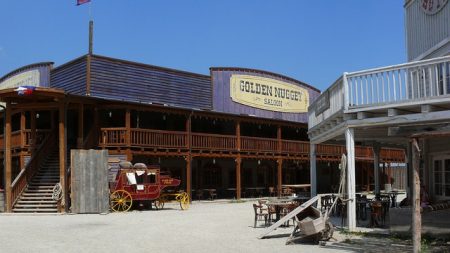 There are many ways for guests to get to Mellonsfolly. The town is a six-hour drive away from Auckland, one of the North Island’s largest cities. The Wahanganui airport is some 80 miles away, and the resort also boasts a helipad.

They probably didn’t have those in the 1860s, but maybe this one slip from authenticity can be forgiven.

“On a typical weekend, people arrive – we encourage them to bring cowboy clothing, but we also have a costume department – and then we give them a town tour. Next we strap holsters on everyone and give them a gun. Everyone grows about six inches when they put that gun on,” Bartley chuckles.

Just to point it out, the guns are not real. They aren’t loaded with bullets, but pulling the trigger does produce a shot-like sound.

If the guests want to get their hands on a real revolver, though, it is a possibility. A day at the ranch is filled with all kinds of activities to fulfil your cowboy fantasy, from horse riding and wilderness tours to clay pigeon shooting and archery.

In the evening, the saloon hosts music and card games, and at every night at 9 o’clock the staff – dressed in authentic Western costumes, of course – fires a big cannon. On Sundays, the six-person staff serves the guests a huge breakfast before they’re corralled back into the modern world.

From One Owner to the Next

Unfortunately for the original owner, Bartley says Bedogni suffered a personal tragedy that caused him to lose interest in his cowboy town. “That’s when I got involved,” Bartley says.

According to Bartley, the town is currently being used as a boutique hotel, with nightly rent rates for the entire town starting at $5,000. “It’s not over the top. We should charge more,” muses Bartley.

Add to that the honey business, and owning the ranch starts sounding pretty tempting.

The resort remains popular, too. Bartley says that Mellonsfolly hosts roughly an event per month. “It’s as busy as we want it to be. We’re quite selective about what we do and who we do it for, because it’s quite a special place,” he says.

The town has hosted weddings, corporate retreats and family meetings, and Bartley says that there are some cowboy fanatics who come back “all the time”. And the guests seem to love it, seeing how the ranch has nothing but five-out-of-five star reviews on Tripadvisor.

“There’s a lot of money here. Especially with China coming back, now they’re paying big money for it, says Bartley.

But if the ranch is so lucrative, why is Bartley selling it off? Sadly, he says that the health issues that he’s dealing with are making it hard for him to keep running the place.

“I’m certainly sad to be selling it. My family doesn’t really want to sell it, but we’ve got so many other business interests. I’ve got to make some decisions,” he told Bloomberg.

So, if you’re a die-hard cowboy fan or just have several million dollars burning a hole through your pocket, now’s the time throw on your Stetson, slap spurs on your boots and mosey on down to New Zealand.

When the next time you’re going to see a Wild West town for sale, anyway?