Among all the huge names in the American fast food business, one stands above the rest. McDonald’s is such a ubiquitous presence around the world that it needs no further introduction.

The burger chain is so omnipresent that The Economist uses the price of a Big Mac as a way to measure the purchasing power of different global currencies. That’s right, it’s called the Big Mac Index and it’s a real thing.

In addition to the Big Mac, McDonald’s also offer other iconic dishes on its menu. Among those are the Quarter Pounder (with cheese), the Chicken McNugget, and the McRib. Well, that last one is there only whenever it seems to feel like it.

But the McRib is not the only temperamental McDonald’s menu item. There is one that taunts us with a promise of a frozen treat that may or may not ever come… The McFlurry.

Now don’t get us wrong, the soft-serve ice cream is a staple of the McDonald’s menu. The problem here are those ****ing ice cream machines.

The Mickey D’s ice cream machines are notorious for never, ever working. The restaurant itself even recognizes that there’s just something about them that always breaks.

How many late night snack cravings have been ruined by a non-functional McFlurrinator? Oh, wouldn’t it be grand if there was some way to know whether your location has a working machine?

Welp, take your hat off for a 24-year-old German software engineer. He’s devised a way for you to check just that. 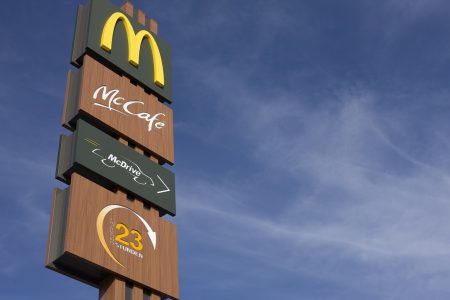 The man in question is Rashiq Zahid, resident of the Kreuzberg district in Berlin, the German capital. On October 22, he launched McBroken.com, a website that tracks whether or not a McDonald’s location’s ice cream machine is working.

The spark to launch the site came to Zahid in July. He was craving something cold and sweet so he popped into a Kreuzberg McD’s to order a McSundae.

If the name sounds weird, it’s a European trademark that the company has. Basically, ice cream with a drizzle of one or other kind of sauce.

Zahid tried using one of the automated kiosks to order the ice cream, but received only an error code. He then tried a mobile order. Same thing happened.

His dreams had been McBroken.

“I was like, there must be something that can be done about this,” Zahid told The Verge.

And, just like mom used to say, if you want something done, you have to do it yourself. That’s just what Zahid set out to do.

Based on whether the cart addition was successful, the program will then place a marker on a map of McDonald’s locations. A green dot means ice cream is plentiful; a red dot tells you to not even bother trying.

“I reverse engineered McDonald’s internal API and I’m currently placing an order worth $18,752 every minute at every McDonald’s in the U.S. to figure out which locations have a broken ice cream machine,” Zahid tweeted upon launching McBroken.

Of course, the bot that he uses doesn’t actually finish the order. Otherwise, Zahid’s daily maintenance costs for the service would reach a fascinating amount of money.

After launching McBroken, however, Zahid soon found out that the one-minute interval for the check was too much. The McDonald’s app recognized McBroken as a bot and blocked its access.

So, Zahid changed the frequency of the check to 30 minutes. Now, the system works without interruption.

McBroken’s information is reliable, too. To verify the accuracy of his bot, Zahid biked to every McDonald’s location in Berlin to try and order ice cream manually.

Everywhere he checked, the bot’s report was correct. Satisfied with the results, he then expanded the system’s scope to cover the U.S. as well.

‘Such a Great Sport’

Within 20 minutes of its U.S. launch, McBroken crashed. More than 10,000 visitors flocked to the service as soon as it became available.

“I’m running this on a server that costs $5 a month, so it was bound to crash,” he chuckled. He brought the website after some troubleshooting and fine-tuning, and it now works as intended.

“I just made it for fun, but people were like: ‘Wow, this is the best thing I’ve seen this entire week’,” he said.

While McBroken provides a useful service, it operates in a bit of a gray area. Zahid reverse engineered the McDonald’s mobile app, and as such the company could have McBroken shut down if so wished.

At the moment, though, that seems unlikely. We’re saying that because a McDonald’s hot shot has recognized the value of McBroken.

“Only a true McDonald’s fan would go to these lengths to help customers get our delicious ice cream! So, thanks!” tweeted McD’s vice president of U.S. communications David Tovar.

“We know we have some opportunities to consistently satisfy even more customers with sweet treats and we will,” he added.

That’s marketing speech for “we know our machines break every five minutes, so this will actually probably be profitable for us”.

Zahid, on his part, appreciated the official recognition. He tweeted Tovar back, thanking him for being “such a great sport” about McBroken.

So, thinking of going out for some McFlurries? You now know where to check first. And if you want to support McBroken, Zahid has an option for you buy him an ice cream on the website!