Police in the Netherlands discovered a family that was “waiting for the end of time” in a basement. They were there, waiting and hiding, for nine years.

They were discovered when one of them showed up at a local pub. The Dutch authorities are trying to put together the story of the 58-year-old man and his family with young adults age 18-25.

They were all living together on the isolated farm of province of Drenthe. The eldest of the young adults reportedly ordered a beer at a bar in the nearby village of Ruinerworld.

When the story was first reported, the family said “they have been living in a basement for years, waiting for the end of time.” 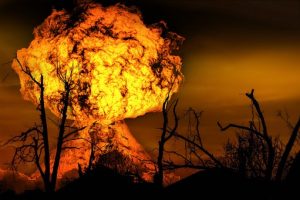 Chris Westerbeek, bar owner, told the broadcaster that he called police after a man “with a confused look in his eyes,” unkempt hair, and a long beard and old clothes walked in his bar. The guy proceeded to order five beers for himself.

“He said where he came from, that he’d run away and that he needed help urgently,” Mr Westerbeek recalled.

Officers went to the remote farmhouse and did a search, where they discovered the hidden staircase behind a cupboard in the living room. This led to down to a basement room where the family was housed.

Policed arrested the 58-year-old man, but it wasn’t immediately clear what his relationship to the family was. According to police, he wasn’t the father.

Drone imaging showed a cluster of buildings with a large vegetable garden on the side. The small property appeared to be surrounded by a fence and was largely obscured by trees.

Roger de Groot, local mayor, said to reporters that the family of six members were believed to have lived there for 9 years on the farm. He said, “I’ve never seen anything like it.”

The children’s mother was said to have died ‘a number of years ago.’ The police that investigated the farm found “a number of improvised rooms where a family lived a withdrawn life,” and they are looking into “all possible scenarios,” and that the family was now “in a safe place receiving appropriate care and attention.”

The police also said that they were alerted by somebody via Twitter regarding being “concerned about the living conditions” of its residents.”