We rely on somethings in life to remain constant so we can know the world is right. Grass grows, birds fly, the sun shines, and the normal human body temperature is about 98.6°F.

For you Europeans, that’s 37°C, precise. This measurement – first measured by German physician Carl Wunderlich some 200 years ago – is the standard by which we know everything’s alright with our bodies.

If your temperature goes up, you have a fever. If it falls, you’ll start suffering from hypothermia. Basic stuff, right?

You’d think so, but as is on par with the rest of 2020, this year has thrown scientists and doctors a curveball. According to a recent study by the University of California in Santa Barbara, the average human body temperature is falling globally.

In the United Kingdom, for example, the normal body temperature is now 97.9°F. A similar group study in Palo Alto, California, found that American bodies run comfortably at 97.5°F.

The thing about this cold snap is that no one knows why it’s happening. Scientists might be able to kickstart evolution in monkey brains, but they have no idea why humanity is growing colder. 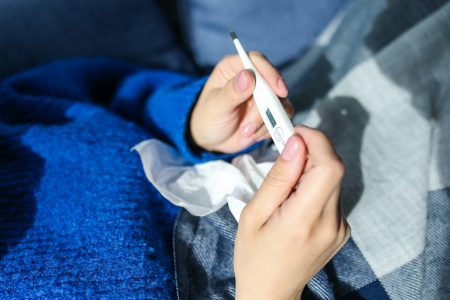 Not Just a First World Problem

But wait a minute, both the U.S. and the UK are modern Western countries. Maybe this whole cold thing is just another first world problem?

Science hears your question, and answers with a firm: “Nope.” Researchers have found the same kind of change among indigenous South American peoples.

Namely, one research project spent 20 years observing the Tsimane people. The Tsimane lead a forager-horticulturist lifestyle in the jungles of the Bolivian Amazon rainforest.

While the Tsimane have in the last decades started using modern currency, that’s pretty much the only newfangled thing they’ve adopted. The Tsimane live in small communities of 20-30 families farming bananas and manioc, and hunting and fishing for additional sustenance.

During the two decades the researchers have observed the Tsimane, their body temperatures have been steadily falling. The annual drop has been around 0.09°F, and at the moment the average Tsimane person runs at 97.7°C.

The change is in line with what we’re seeing in the West, says Michael Gurven, UC Santa Barbara professor of anthropology.

“In less than two decades we’re seeing about the same level of decline [in the Tsimane] as that observed in the U.S. over approximately two centuries,” he said.

So, to summarize, whether it be modern Americans or indigenous peoples with little contact with the outside world, we’re getting cooler. If this goes on, we’ll reach the level of coolness scientist call “totally tubular” in a couple more decades.

But why on Earth is this happening? Gurven says scientists just don’t know, but there is an educated guess that an outside factor could’ve fundamentally changed something in the human physiology.

One theory, according to Gurven, is that we’re experiencing fewer infections these days. As we all undoubtedly, an infection will raise the body’s temperature, resulting in a fever.

With modern medicine, clean water, and good hygiene, bad infections are much rarer than just a couple hundred years ago. So maybe this is affecting the numbers when scientists are calculating average body temperatures?

Thomas Kraft, a postdoctoral researcher in the same department as Gurven, doesn’t think so.

“No matter how we did the analysis, the decline was still there,” said Kraft.

“Even when we restricted analysis to the less than 10% of adults who were diagnosed by physicians as completely healthy, we still observed the same decline in body temperature over time.”

The dropping temperatures among the Tsimane also works against this theory. As said, the Tsimane live without such luxuries as readily accessible modern healthcare or running fresh water.

“The area of Bolivia where the Tsimane live is rural and tropical with minimal public health infrastructure. Infections are still widespread in rural Bolivia,” Gurven confirmed.

It’s Not Cold Air, Either

Another purported cause behind cooler people is air conditioning. According to Kraft, a second theory states that because of heating and AC, our bodies don’t have to work so hard to regulate our internal temperatures.

Again, this sounds like a good possibility. Air conditioners are particularly popular in the U.S., and while the UK doesn’t use quite to the same extent, they still enjoy efficient heating systems.

But, once more, the Tsimane throw a spanner into the works. Air conditioners don’t occur naturally in the jungle, so the Tsimane unfortunately have to do without.

“While Tsimane body temperatures do change with time of year and weather patterns, the Tsimane still do not use any advanced technology for helping to regulate their body temperature,” said Kraft.

So, scientists are stumped when it comes to explaining our diminishing body heat. Still, Gurven said that better living conditions as a whole worldwide could offer at least a partial explanation.

“It’s likely a combination of factors – all pointing to improved conditions,” Gurven said.

No Need for Alarm

We might not know why, but the fact of the matter is that the average body temperature is falling. We better get ready to rewrite medical textbooks to accommodate for the change.

But hold your horses, say Gurven and Kraft. According to the scientists, the lower average will probably mean very little in terms of doctors caring for patients.

“One thing we’ve known for a while is that there is no universal ‘normal’ body temperature for everyone at all times, so I doubt our findings will affect how clinicians use body temperature readings in practice,” said Gurven.

Indeed, although doctors recognize 98.6°F as the “normal” temperature, that’s really more of a generalization. A healthy person can be up to 1°F warmer or cooler at different times of day – without anything being wrong.

Strenuous physical activity can also make a person hotter, while we all grow colder as we age. Women can also experience wildly fluctuating body temperatures based on the menstrual cycle.

This mean that the mystery of falling temperatures is unlikely to affect our normal lives. But it might in the future give clues as to the overall health of a population.

“Body temperature is simple to measure, and so could easily be added to routine large-scale surveys that monitor population health,” Gurven concluded.