You might not be too acquainted with Teen Patti, but South Asia is the home of this straightforward yet entertaining card game. The game, which has Indian origins, is enjoyable to play with loved ones and friends. You can download 3 Patti Master APK to your gameplay. 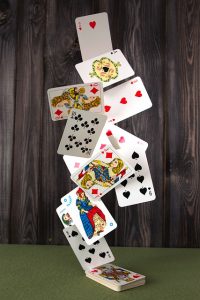 What is Teen Patti?

Teen Patti also referred to as tri-card, is translated into Hindi as “three cards.” The game of Three Card Brag gets invented in Britain in the 16th century, and it is where Teen Patti got its start. Each player in Three Card Brag received three cards face down and had to decide whether to bet or fold based on the strength of their hand. It was one of the original variations of poker.

Nowadays, the Teen Patti game is a streamlined variation of poker that is well-liked in South Asia and India, often played in teams of two to ten people, and a standard 52-card deck devoid of jokers gets used – download 3 Patti Master APK.

The fact that Teen Patti is available in so many different iterations ups the fun element of the game to a whole new level. Let’s look at the game’s most well-liked iterations.

Each player receives 3-cards carefully shuffled from the deck. The dealer then draws a card at Random, designating all other cards of the same rank, strength, and number as jokers (wild card).

In the card game of Mulfis, the player who has the weakest hand will prevail. The only difference from the traditional Teen Patti game’s rules is that the player with the lowest hand wins.

A, K, 4, and 7-ranked cards are jokers in this variant. Here, the player who has the best Teen Patti hand will take home the victory. Everything else, including betting, stays the same.

The only distinction between 4x Boot and regular Teen Patti is that the starting boot value will be four times the standard boot value.

The faceoff cards in this scenario are cards 10, J, Q, K, and A. The player with the best Teen Patti hand will win the game after each player receives it from the deck.

Each player is dealt four cards in this variation. The player’s hands consist of 2 wild cards, the 2-cards with the lowest rankings.

The best cards get regarded as wild cards in this situation. The rest of the items are similar to low wild.

Here, the dealer deals 3-cards to each player and deals 3-face-up cards to the table. The first card is the one that establishes the value of the number that becomes the Joker. The second card is the color card, and as its name suggests, in this form, all jokers dealt with the same color are jokers. And the burst card is the third one. If any player at the table gets dealt this card, they must fold.