New England gardeners and farmers are buckling under a not-quite-biblical but still irritating plague. A chittering horde is taking over the northeastern states, digging up plants and destroying flower beds.

It’s chipmunks! The critters’ population has exploded this summer due to favorable food conditions and they’re unleashing their wrath upon New England gardens.

The region had a bumper crop of acorns and beechnuts last fall. The bounty of nuts was so huge the chipmunks weren’t able to hoard all of them into their underground burrows before winter.

As spring came around this year, there was still a lot of nuts on the ground for them to eat, Shevenell Webb, a small mammal biologist with the Maine Department of Inland Fisheries and Wildlife, told Associated Press. 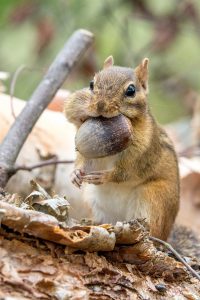 With full bellies, the chipmunks had plenty of energy to start getting busy. The abundant food supply also lead to high survivorship in their first litter in the spring, professor emeritus at the University of Vermont and the author of the Vermont Small Mammals Atlas Bill Kilpatrick said in an interview with the Vermont Public Radio.

Oh, that’s right. The Eastern Chipmunk has two litters a year, one in the spring and one in July.

As a result, the New England states are now teeming with chipmunks. And squirrels, hares, mice, and other small critters that have reaped the benefits of the abundant nuts.

The chipmunks are pretty adorable creatures. Webb says that people have – at least earlier in the year – enjoyed the company of the critters.

“They’re cute. They’re fun to watch in the forest as they duck in and out of the holes and play peekaboo,” she says.

But those trying to maintain a garden are probably less enamored with the chirping varmints. The chipmunks might be cute, but they have a destructive side as well.

The chipmunks have rampaged through gardens, burrowing into lawns and flower beds, and even sneaking into homes.

“We can’t grow a tulip without them digging it up. They don’t even pause,” lamented Steven Parren, wildlife program diversity manager for the Vermont Department of Fish and Wildlife.”

It’s not only gardens that might have to bear the brunt of chipmunk invasion. Population of other local animals could be affected as well, since chipmunks aren’t actually strictly vegetarian.

“Chipmunks are omnivores, so they’re going to feed on other prey items like songbirds, their eggs, and frogs. That makes up a portion of their diet as well,” says Kilpatrick. 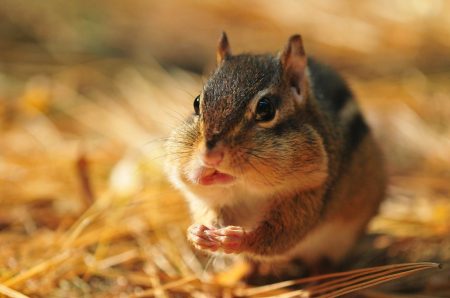 But New England gardeners won’t have to worry about the chipmunk invasion lasting too long. Luckily for them – but not for the chipmunks – nature will take care of the problem on its own.

Populations of small mammals are in constant flux, being abundant one year and then crashing down to normal numbers the next.

For example, in 2018 New England was momentarily overcome by squirrels. Predators and lack of a steady food supply solved the issue by the following year.

“There will be increased numbers of predators, not only bird predators but also things like weasels and foxes will also increase,” Kilpatrick projects.

The trees that allowed the chipmunks to proliferate in the first place have also conspired against them. According to Kilpatrick, the abundance of their crop – or mast – was nothing but the trees’ murderous ploy to rid themselves of the ravenous chipmunks.

“The trees use a strategy of trying to produce a lot of mast and then the following year produce very low mast, so that the predators on those seeds essentially starve to death,” explains Kilpatrick.

“They’re playing the game kind of like the wildebeests on the Serengeti. They produce all their seeds or all their young at one time so that the predators, in this case the seed predators, just can’t feed on all of them and many of them survive to produce new trees.”

Finally, the chipmunks have a habit of limiting their numbers on their own. They chase each other around to establish their territories, and often this game of tag brings them right in front of a passing car.

This might all sound cruel, but such is life for those at the bottom of the food chain.

As dictated by nature, most of the chipmunks will probably be gone by the next summer. Of course, not all gardeners can wait that long and there are some tricks to keep the critters out of the flower beds.

The first thing to pop into many people’s minds would probably be to poison the chipmunks. There aren’t many chipmunk-specific poisons on the market, though, and using products for other rodents will only make the chipmunks run away and return later.

Snap traps for mice and rats can work with a suitable bait. But there are also less deadly options available.

According to Yankee Magazine, one of the best ways to keep chipmunks away from your yard is to remove the things that attract them in the first place. This includes shelter and food sources, such as piles of garden clippings, leaky hoses, bird feeders and pet food.

Using natural repellants like capsaicin extract, predator urine, or other strong scents can be effective. Or you could just let your dog run around the yard regularly and chase the chipmunks off.

There’s probably no need to go too nuts with the chipmunks, though. As said, they’ll be gone on their own soon enough.