Have you seen that old episode of The Simpsons where Homer gets banned from a seafood buffet for eating too much? It seems the cartoon predicted the future — once again.

To find Homer’s real life equivalent, we’ll have to travel to the city of Changsha in south-central China. There we find a man who goes by the name of Mr. Kang.

Just like Homer Simpson, Mr. Kang can eat immense quantities of food at once. And just like Homer, he’s been kicked out for good from Handadi Seafood BBQ Buffet, one of his favorite restaurants.

According to the BBC, Kang calls the treatment he received discriminatory. After all, he hasn’t exactly done anything wrong.

“I can eat a lot. Is that a fault?” he wondered in an interview with Hunan TV.

However, Kang did mention how much food he ate, and the amounts of food are pretty disturbing. On one visit, he consumed around three pounds of pork trotters, while on another binge he ate nearly nine pounds of shrimp.

However, the man claims that he didn’t waste any of the food. In his own words, he ate all of it — at least the parts that were humanly edible. 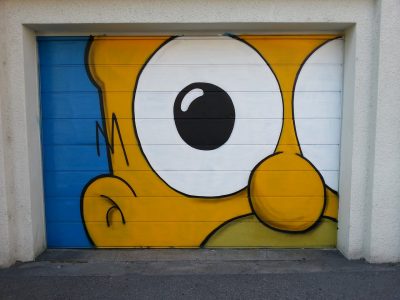 The restaurant’s anonymous owner, however, isn’t thrilled with Kang’s eating habits. According to him, Kang is eating him out of house and home.

The owner went into more detail about Kang’s ravenous appetite. He doesn’t just eat enormous amounts of food — during one sitting he also consumes 20-30 bottles of soy milk.

Whereas most customers only take one or two pork trotters on their plate, Kang will empty the serving tray.

“And for prawns, usually people use tongs to pick them up. He uses a tray to take them all,” the owner bemoaned.

Fun fact, that’s exactly what Homer did as well. The similarities are uncanny.

Kang’s and the restaurant owner’s interviews have blown up on Chinese social media. The Hunan TV story has gathered more than 250 million views on the Weibo platform.

The public’s opinion on the Kang Incident is divided. Some sympathize with the restaurant owner, while others question why he is running a buffer restaurant if he can’t afford it.

The case of Mr. Kang hasn’t yet attracted the attention of China’s notoriously all-seeing government. But it might soon do so.

After all, last year China’s President Xi Jinping launched the Clean Plate campaign that aims to crack down on food waste and overeating. And for once, there’s actually a good reason for it — China could be running out of food.

Food shortages are an ever-growing issue in multiple Chinese regions. The problems have been compounded by the supply chain issues brought on by the COVID pandemic.

As a cherry on top of the food disaster, floods in China’s breadbasket areas destroyed large quantities of crops earlier this year. So, it’s no wonder the state is concerned about food.

But instead of trying to produce more of it, the Clean Plate campaign encourages Chinese citizens to eat sensibly. Xi is telling China to consume only as much as they need, and finish everything they put on their plate.

A particular target of the campaign is mukbang videos circulating on social media. The mukbang trend started in South Korea, and it features social media personalities eating immense quantities of food on camera.

Chinese media channels have published critical reports of mukbang stars. Even social media platforms have started cracking down on the videos.

Now, if you search for them, China’s most popular social media platforms will display a warning message chastising people for wasting food. It’s possible that the videos could soon start getting deleted off the platforms altogether.

However, some mukbang stars are playing along with the campaign. A popular mukbanger, going by the name Mini, appeared on a video on a state-run news channel asking people to stop wasting food.

Whether they’re doing so out of genuine social concern or because they’re afraid of unwelcome government attention, we can’t say. But at least the “don’t waste food” message is sensible.