Do you have any tattoos? This Grandma shows that it’s never too late to follow your dreams, and get a tattoo, even at 82.

Judy Dede documented her exciting journey on TikTok with the help of her granddaughter, Brandy O’Reily, 44. Dede has gone viral on TikTok for it all and has earned herself the nickname, “Tat Granny.”

“When I made my decision to do this, it was just me and my girls,” Dede told Good Morning America. “Every day I’m just in awe of what’s going on around me.”

She first decided on getting a tattoo after reading an article about an 80-year-old woman who also surprised her family by getting her first tattoo on her birthday.

“It just blew me away,” she recalled to Fox News. “And that’s when I said, ‘You know what? I’m living each day as best I can because you never know what tomorrow is going to bring.'”

“We had been shopping and had just stopped to go to the grocery store, and I said, ‘Shut off the car. I’m going to blow your mind. I want to get a tattoo,'” she added. “They were stunned.”

O’Reily recorded the moment and asked her grandma to repeat herself as she was caught off guard. 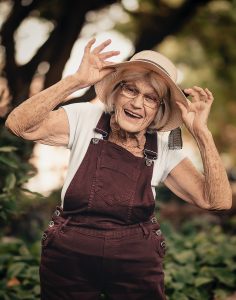 “When she told me that she wanted to get this tattoo, I was completely in shock and blown away,” O’Reilly recalled. “I had to get it recorded because I couldn’t even believe that she said that.”

O’Reily’s post really took off after sharing the video on TikTok. The clip has garnered over 857,000 likes and more than 4,800 comments since it was posted on October 15th.

“I just, I never dreamed it,” Dede told WANE. “Next thing I know, [O’Reilly’s] telling me ‘Grandma, we just got a message from somebody in South America.’ Messages have come from all over the world… It just blows my mind.”

As the video grew in popularity, O’Reilly called Black Sheep Tattoo in Fort Wayne, Indiana- a place where she got seven of her own tattoos, to set up an appointment for Ded on October 30th.

O’Reily knows the tattoo process and ensured that her grandmother would be prepared for the big day.

“Our biggest concern was her skin because of her age,” she explained to GMA. “I made sure that she had something good in her belly before we left because you can’t go get a tattoo on an empty stomach, and [she] drank lots of water to make sure that her skin was hydrated.”