There are some difficult bosses out there — we’re sure everybody knows at least one. But a Georgia car repair shop owner took things to a whole new level in delivering an ex-employee’s final paycheck.

Now, granted, he did technically pay most of what he owed. But he paid by dumping 91,500 grease-covered pennies onto the employee’s driveway.

That’s not exactly something you can just go and take to the bank. In total, the pile of pennies weighed more than 500 pounds.

Andreas Flaten, the employee in question, told Star Tribune that he and his girlfriend spent multiple hours carrying the pennies into this garage. They used a wheelbarrow to make the job easier, but the weight of the coins collapsed its tire.

Finally, they did get most of the pennies off the driveway. Flaten said Coinstar eventually collected and washed the coins, and handed him a sum in paper money that was close to the $915 he was owed.

As a result of the stunt, the U.S. Department of Labor has now sued the shop owner.

“Workers are entitled to receive information about their rights in the workplace and obtain the wages they earned without fear of harassment or intimidation,” said the department’s wage and hour division’s Atlanta district director Steven Salazar. 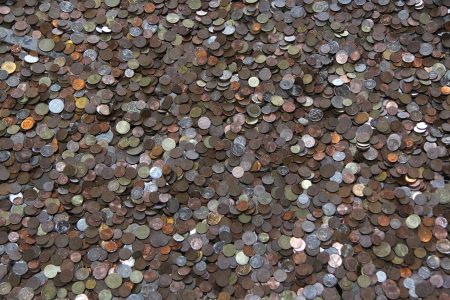 ‘I’ve Got Plenty of Pennies’

The dispute that finally culminated in the Great Dumping of the Pennies started in January 2021. That’s when Flaten reported to the Labor Department that his ex-boss, Miles Walker, had not paid him his dues.

Flaten quit his job at A OK Walker Autoworks in Peachtree City after he got into an argument with Walker. On January 26, he made the report that he had not received the $951 that Walker owed home.

The Labor Department contacted Walker, and the boss initially claimed that he prepared a check for Flaten. “It never made it to the mail,” he said according to the lawsuit.

However, when the Department called Walker the next day, the man flat out refused to pay. But just a few hours later, he reportedly changed his mind.

“How can you make this guy realize what a disgusting example of a human being he is? I’ve got plenty of pennies; I’ll use them,” Walker said based on the lawsuit.

Walker still took his time to gather up the pennies, it seems. But on March 12, he showed up to dump the pennies onto Flaten’s yard.

According to the lawsuit, he also left a copy of Flaten’s paycheck on top of the pile. He had scrawled an expletive onto it.

Walker’s antics caught the eye of the media when Flaten’s girlfriend posted an Instagram of the coin pile the next day. As a result of the attention, Walker made a post on A OK Walker Autoworks’ website.

“What started out as a gotcha to a subpar ex-employee, sure got a lot of press. Let us just say that maybe he stole? Maybe he killed a dog?” Walker wrote according to the lawsuit.

The Department of Labor claims in its lawsuit that the message Walker posted was “defamatory.” The agency also added that his coin-dumping stunt was a retaliation against an ex-employee that violated the Fair Labor Standards Act.

But the Department isn’t suing Walker just for the pennies. The lawsuit also claims that Walker and his shop hadn’t paid legally required overtime rates, and that they had failed to keep adequate records of employees’ pay rates and work hours.

Not only that, once the story about the pennies broke, several employees came forward about workplace harassment. One of the ex-employee’s is Cerena Wandersee, whose manager Walker was before he become the owner of the auto shop.

“He said, ‘you think you have a bigger d**k than any of the boys, well, we’re going to prove that right now.’ And he decided to de-pants me in the lobby and thought it was funny,” Wandersee told CBS46.

The Labor Department is seeking $36,971 in back wages and damages for at least nine employees, including Flaten.

‘Doesn’t Matter, He Got Paid’

When CBS46 inquired Walker about dumping the pennies, he initially claimed that he wasn’t sure if he’d done it.

“I don’t know if I did that or not, I don’t really remember,” Walker told the news outlet.

However, he quickly said it’s of no consequence even if he did. Flaten got his money, didn’t he?

“It doesn’t matter, he got paid. That’s all that matters. He’s a f*****g weenie for even bringing it up,” ranted Walker.

For his part, Flaten said he was pleasantly surprised by the Labor Department Lawsuit. In his own words, he hadn’t known what he could expect after his initial report.

“I am happy to see justice is being served. At first, I thought he pretty much got away with it,” said Flaten.