Did you watch Stranger Things with the rest of us? The house is in Fayetteville Georgia and a mere $300K.

Will, Joyce, and Jonathan Byers all lived in this house, and now you can, too. It’s for sale, if you want in.

The property that was used for the exterior of the fictional family home of the Byers’ in the Netflix series is for sale officially. It’s a three-bedroom, two bath ranch home. There’s a total of 1,846 sq. ft., listed by Michael Smith, for $300,000.00.

“This home was featured throughout the first few seasons of the show and remains a nostalgic focal point of the series,” the listing reads.

The listing regarding the Stranger Things also states, “Since the show was aired fans have traveled far and wide, almost daily, just to drive by and get a picture. So much so that the owners had to put up a driveway barricade and ‘Private Property’ signs just to keep people from trespassing, so needless to say the house gets a ton of attention.” 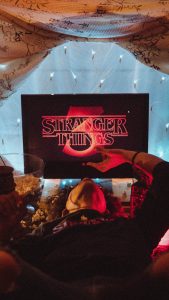 The property is a total of 6 acres of land and marketed as the “perfect” location for an AirBnb. However, there is a disclaimer for anyone interested in the property as the listing asks that potential buyers respect the home and go through agents to schedule a viewing. They’re also encouraged to “not feed the Demogorgon.”

There’s another Stranger Things affiliated property that popped up on AirBnb earlier this year. The property is in Albuquerque, New Mexico and it was used at the exterior of the Byers’ new house in California.

The owners of that property, Ryan and Karen Asher shared that they’ve worked to keep the interior  “as original/authentic as possible.”

They originally wanted to move in, “until learning how popular Stranger Things has become. We decided to turn it into an Airbnb in order to share the home with others to enjoy as well.”

The AirBnb listed is a five-bedroom home that can sleep up to 14 and costs about $400.00 per night.