There’s a certain humble serenity to the life of a Buddhist monk. You spend your days doing simple work, contemplating the consciousness, quietly meditating…

Apparently, even pious monks aren’t beyond having earthly vices. At least, that’s if a recent outlandish incident from Thailand is anything to go by.

A small, local temple in the Phetchabun province of north-central Thailand is now deserted. All of its monks have been kicked out because they got busted for doing meth.

Boonlert Thintapthai, a local district official, told the news agency AFP that police officers forced the temple’s abbot and four monks to take drug tests on November 28. We couldn’t find reports on why the drug tests were necessary, but clearly, there were some serious suspicions if the cops thought them appropriate.

As it turns out, the suspicions may have proven correct. Urine samples from every last one of the monks — and the abbot — showed that they had expanded their minds with meth in addition to meditation.

Following the drug tests, all of the monks have been defrocked. That’s to say, they’ve had to relinquish the distinct orange robes Buddhist monks are famous for.

Consequently, they lost their status as holy men. These now unholy men also got promptly ferried off to a rehab facility to kick their drug habit. 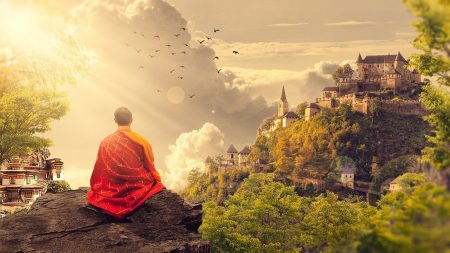 Nobody to Make Merit With

Not only is the drug bust at the temple an embarrassment for Thailand’s Buddhist establishment. It also puts the local faithful in a difficult position.

“The temple is now empty of monks and nearby villagers are concerned they cannot do any merit-making,” explained Boonlert.

Merit-making is an important Buddhist practice in rural Thailand. It involves residents donating gifts, most often food, to local temples and monks.

By doing so, they’re generating good karma for themselves, which results in merit — a beneficial force that brings fortune and positivity. The locals aren’t doing this just for themselves, though, as according to Buddhist practices, your merit is shared with deceased loved ones.

As such, the living are able to help their dead relatives free themselves from the Buddhist cycle of eternal rebirth and reach enlightenment. Needless to say, it’s kind of a big deal.

But with the temple now empty, locals have no one to help them build merit. Boonlert said authorities are aware of the situation and would transfer new monks to the temple.

We can only hope that the new monks will behave better than the previous ones. Apparently, misbehaving monks are a common problem in Thailand.

Reports of monks getting arrested for money laundering, drug and alcohol abuse, sexual assault, drug trafficking, and even murder have become a weekly tradition in the country.

For example, in March 2022, Luang Pu Tuanchai — a monk famous for his claims of omniscience — was stopped while driving drunk. He ran a red light with his pickup truck while carrying dozes of methamphetamine pills.

He unsurprisingly lost his robes as a result.

In January, another monk had to disrobe after he got caught consuming meth. Not only that, he also sold the drug to local youths.

But what is driving all these monks to a life of crime? The issue is complex and there’s no simple answer.

According to Kulabkaew, the lax rules governing the life of monks in Thailand is one aspect of the problem. He says that basically anyone can become a monk with very little religious education, and the Buddhist authorities lack the means to root out troublemakers.

“Monastic life in Thailand has long been temporary. So, there are chances that youngsters with dubious backgrounds or even criminals get ordained as well,” he explained.

There are even cases of straight-up violent criminals deciding to become monks to avoid legal consequences. In 2019, a temple abbot was arrested for attempted murder, having fired several gunshots at a crowd 15 years earlier before becoming a monk.

Another problem is the skyrocketing amounts of meth moving through Thailand. After a military junta overthrew the government of neighboring Myanmar, more and more drugs have been pouring into Thai streets.

With cheap and abundant meth, less morally scrupulous monks see an opportunity to supplement their livelihoods by selling it. Or they decide that meth is more effecting at altering their consciousness than meditation.