Friends enjoy their time in Gatlinburg Tennessee, and so do the bears. This bear wanted a good time, complete with snacks and drinks, so it did just that.

Michelle Eberhart was visiting the cabin with her husband and their friends. Friday morning, Eberhart and her friend were alone in the cabin while their husbands were golfing.

So of course, this was the perfect time for the bear to visit.

“She just started pointing and I was like, ‘What?’ and so I turned and looked and there’s a bear just putting his full force on the door. And then the door opens,” Eberhart said. 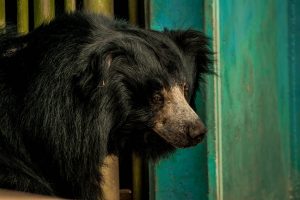 The black bear broke through the locked door and got into the cabin. The two women ran upstairs as fast as they could to escape the situation.

“It was just almost surreal, it was just a fight-or-flight, like I just have to remove us from this situation and make sure that we’re at least in a safe place,” Eberhart said.

A spokesperson for the Tennessee Wildlife Resources Agency, Matt Cameron, said that this is not normal bear behavior.

“It’s really not typical bear behavior for them to come on to someone’s porch and start looking for food,” Cameron said. “That means those bears have been around humans and have received handouts or have found a food source around a dwelling.”

Police came to the scene and helped to remove the bear from the cabin, but not before the bear grabbed some grub. “They got five pounds of Reese’s Peanut Butter Cups and a pound of M&M’s and two pounds of Sour Patch Kids, and two bags of potato chips … two beers and two Diet Cokes and about 20 Zyrtecs,” Eberhart told WATE.