Humanity has come a long way since the times of the ancient Romans. We’ve created technological marvels beyond their wildest imaginations, brought the world together in incomprehensible ways, and even left the planet and gone to the moon.

But in some ways, we’re still the same people. For instance, we’re still just as obsessed with our genitalia as more than 2,000 years ago.

Recently, archeologists discovered a perfect example of this. They’ve recovered an ancient millstone from Cambridge, UK – decorated with an erect human phallus.

The stone itself was found in several pieces between 2017 and 2018. During the construction of the A14 highway in England, workers and archeologists unearthed more than 300 hand mills and millstones dating back to Roman occupation of the British Isles.

It was only after they put the pieces together, though, that archeologists came face to face with the carved dong. And it’s a rare find to boot.

Steve Sherlock, head of archeology at Highways England, told BBC that decorated Roman millstones are exceedingly scarce. Out of the 20,000 or so millstones found in the UK, only four have carvings on them.

In this case, archeologists can thank recycling for preserving the penis carving. Some crafty ancient Roman had put the old, broken millstone to good use as a bedstone.

And some claim recycling doesn’t work. Well, if it wasn’t for recycling, we wouldn’t be able to marvel at a millennia-old wang, now would we? 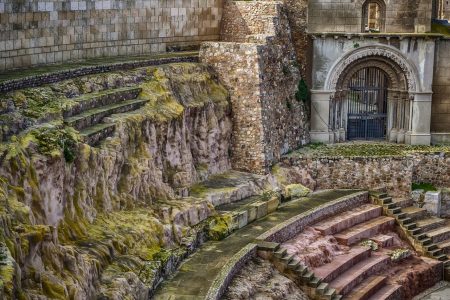 But there’s more to the stone than just humor value. According to Dr. Ruth Shaffrey from Oxford Archaeology, it’s an important discovery.

“As one of only four known examples of Romano-British millstones decorated this way, the A14 millstone is a highly significant find,” Shaffrey told BBC.

“It offers insights into the importance of the mill to the local community and to the protective properties bestowed upon the millstone and its produce – the flour – by the depiction of a phallus on its upper surface.”

Indeed, the Romans didn’t carve dongs onto thing just for a cheap giggle. The human penis was a venerated symbol, said Sherlock.

“[Phallic images] were seen as an important image of strength and virility in the Roman world, with it being common practice for legionaries to wear a phallus amulet, which would give them good luck before battle,” he said.

Imagine a Roman soldier carrying a penis necklace into battle as a good luck charm. We’re sure Claudius here would still find many kindred spirits in today’s armies.

The phallus-marked millstone had another meaning as well, said Sherlock.

“There were known associations between images of the phallus and milling, such as those found above the bakeries of Pompeii, one inscribed with ‘Hic habitat felicitas’ – ‘You will find happiness here’, he explained.

Everyone knows you can’t say “happiness” without a “penis.” Clearly, even the Romans knew that.

The connection between the Roman military and penis carvings is well established. According to The Guardian, the penis could signify a sword or a spear to a Roman infantryman.

Back in 2019, though archeologists working on Hadrian’s Wall found further proof of the connection. Near the wall, they discovered 1,800-year-old carvings in a quarry.

Among those carvings was, you guessed it, an erect dong. Presented here, the penis connects clearly to military traditions.

The Romans constructed Hadrian’s Wall as a barrier against the native British tribes in the north. As an important fortification, the wall had to maintained and repaired regularly, wrote All That’s Interesting.

It was a job for soldiers stationed at the wall to carry the heavy stones the wall needed to their assigned places. You can easily see how a bored legionnaire might’ve decided to hack a penis into the quarry’s stone walls.

Whether he did it to invoke protection against falling rocks or just to have a laugh, we will perhaps never know. What we can be sure of is that young men with too much time on their hands have always found their minds wandering back to their genitalia.

The Writing’s on the Wall

Although the penis did have symbolic significance, Romans weren’t above leaving messages behind just for the heck of it. In fact, their graffiti are one of the more important windows into what life was like back then.

The ancient city of Pompeii is a gold mine of Roman graffiti. The writings found on its walls range from heartfelt to downright offensive.

One carving, for example, simply declares: “Aufidius was here. Goodbye.” Thanks for letting us know, Aufidius.

In another, one would-be philosopher gives us this useful advice: “A small problem gets larger if you ignore it.”

And then there’s the raunchy stuff. Some of it is too inappropriate for us to publish, but let’s take a look at the tamer ones.

“Chie, I hope your hemorrhoids rub together so much that they hurt worse than they ever have before!” one writer told a supposed enemy.

“I screwed a lot of girls here,” another person wrote, wanting to share a tale of his conquests with the world.

One toilet has this written on its wall: “Defecator, may everything turn out okay so that you can leave this place.” We probably don’t want to know what inspired this message.

But whatever the writings say, one message is clear. Whether it’s some thoughtful anecdote or just a picture of a penis, people like leaving their mark on the world.