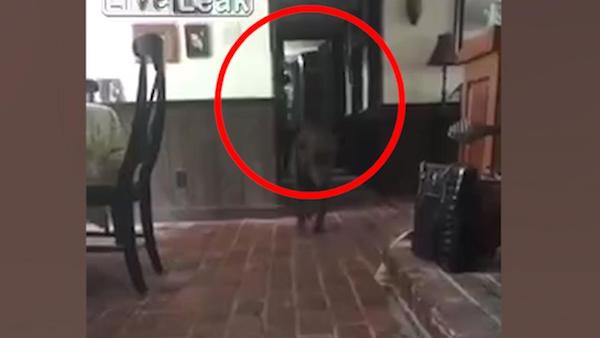 An Ohio homeowner told his dog sitter to flee after she sent a seemingly innocent video of his dogs running happily. In the video, a shadowy figure can be seen lurking in the background, which some believe means the house is haunted.

At first, nothing seems amiss in the video, which was shot in Cincinnati. The dogs are playful and running happily up to the sitter. But when the video is slowed down, there’s clearly a man moving between the doors in a hallway towards the back of the house.

Live Leak, the site where the file was uploaded, said it spooked the homeowner. The video explanation reads, “This girl was dog sitting for a family friend when she recorded this video to send to the owner to show that the dogs are doing well. She was alone at the time of the recording and did not notice anything strange until she read his response, ‘Get out of the house and call 911.’ When the owner watched the video he noticed something strange in it. Look at the doorway as the chocolate lab runs into the room. A human figure can be seen moving across the doorway. Note how the girl does not react to the figure while recording the video, leading me to believe that it was not an intruder.”

The now viral video has many people sure it was legit ghost sighting, but others are crying foul and suggesting that the dog sitter had invited her boyfriend over and wasn’t entirely honest with the homeowner.

One viewer said, “It’s called a boyfriend who wasn’t supposed to be there,” while another added, “I’d say it’s the person she brought over to ‘keep her company’ just off to the bathroom.”