It’s difficult enough to buy a car at the moment, what with the computer chip shortage and ridiculous demand ravaging auto makers. And it probably doesn’t help that 4,000 brand-new cars are currently on fire in the middle of the Atlantic.

Not only that, the ship they’re on is abandoned. There’s nobody to put out the fire, so it’s likely that the cars — and potentially the ship — will go up in smoke, if they don’t end up on the bottom of the ocean first.

According to The Drive, the ship carrying the cars, called Felicity Ace, left the port of Emden in Germany on February 10. Its destination was Davisville in Rhode Island.

Onboard the ship were 4,000 cars that had rolled off the production line at Volkswagen Auto Group. Among the cars were regular VWs, but also fancier makes, like Bentley, Porsche, and Audi.

Unfortunately, it now seems nobody will ever get to drive those automobiles. 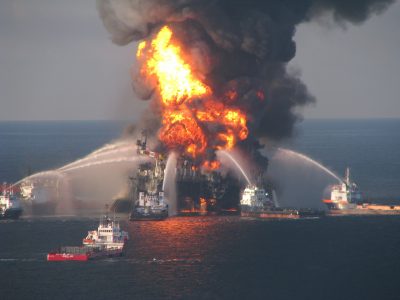 The Felicity Ace’s journey began uneventfully enough. By the morning of February 16, a week before it was set to arrive in the U.S., the ship had reached the Azores Islands, some 900 miles off the coast of Portugal.

That very same morning, the Panama-flagged ship sent out an emergency transmission. Felicity Ace was on fire.

We can assume the crew did its best to put the fire out, but it seems their efforts were to no avail. All 22 members of the crew climbed onto a lifeboat and left the ship.

The good news is that none of them was hurt and the entire crew is now safe and sound. That leaves us with the still-burning ship, though.

The cause of the fire is currently unknown — it’s not like anyone can get on the ship to investigate, after all. However, Quartz noted that similar ship fires usually start with an oily rag or a fuel leak in the engine room.

What’s keeping the fire going, though, are likely several electric vehicles in the ship’s cargo hold. Ironically, the batteries in the EVs — touted as more environmentally friendly than gas-fueled cars — are fueling the flames that are undoubtedly sending all kinds of pollution into the atmosphere.

Instead, you have to dump a ton of various dry chemicals onto the blazing batteries to extinguish them. As you can probably imagine, getting sufficient quantities of the stuff to the middle of the ocean is proving a bit of a problem.

João Mendes Cabeça, the captain of the port of Faial in the Azores, told Swissinfo that the special firefighting equipment is on its way to the Felicity Ace. However, they’re getting to be in a hurry.

According to Cabeça the fire is creeping closer to the ship’s fuel tanks. It’s not there yet, but the captain said the flames are slowly but surely inching towards the tanks.

“Everything was on fire about five meters above the water line. It is getting closer,” he added.

To make things even more difficult, the rescue crews won’t be able to get on the ship. They’ll have to try cooling the ship’s hull from the outside and hope it kills the flames.

And then we have to people whose cars are on the ship. Luxury cars are often made to order, and that was also case with many of these fancy rides.

One of them is Matt Farah, who runs The Smoking Tire YouTube channel. He’s probably currently pondering the irony in his channel’s name.

“I ordered a [Porsche] Boxster Spyder in August, and I was very excited to get it at the end of this month, and now it seems like it might become an artificial reef,” Farah told The Drive.

“I’m only saying this because I know no one was hurt, which is obviously more important.”

None of the understandably disappointed new car owner could’ve expected things to take this kind of a turn. Nor did they have any reason to, since the Felicity Ace has so far served fans of European cars with distinction.

The 650-foot-long ship, built in 2005, has regularly carried both luxury and regular cars across the Atlantic. It was a vessel of choice for the VW Group, and also carried Lamborghinis on several occasions.

Whether there are Lamborghinis on the ship right now, the sports car manufacturer has not confirmed. But if there are, well — you wouldn’t recognize them as Lamborghinis by now anyway.