The thing is, you’re never very far away from a potential explosion. We’re surrounded by things that could blow up in our faces without warning, from phones and computers to toilet bowls and even animals.

Or something could just suddenly fall from the sky and wipe out everything in a 100-mile radius. 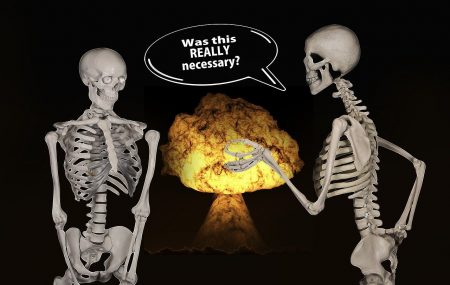 In 2019, a huge fire broke out at an Australian agricultural facility. No one got hurt, luckily, but the facility was completely destroyed.

A good deal of the damage came from unexpected source. The facility was a cattle breeding complex and as the fire went on, dozens of pressurized bull semen containers started exploding.

According to local emergency services, the fire heated up the “liquid” inside the tanks, causing it to rapidly expand. The end result was a bunch of exploding semen tanks.

Some of the tanks were propelled through the walls as missiles with a sperm payload. The ones that flew the farthest were eventually found in the yards of neighboring properties.

A 25-year-old Ukrainian chemistry student called Vladimir met a tragic end in 2009. His jaw and most of his face blew clean off when a piece of bubblegum exploded in his mouth.

Apparently, the student was a fan of chewing and used to dip it in citric acid to get more flavor out of it. He was also into practicing chemistry by making homemade firecrackers.

According to local police, one Saturday night the young man most likely dipped his chewing gum in the wrong container. When he bit down on it, the explosive chemicals ignited with gruesome results.

By the time emergency responders arrived, there was nothing they could do.

This case was more of a series of explosions than a single large bang. In 2005, people found more than 1,000 toads in the 100 miles between the city of Hamburg and the Danish border that had mysteriously exploded.

No one could make heads or tails of the blown-apart amphibians. Experts tested pond water and checked the splattered remains for viruses or bacteria, but found nothing out of the ordinary.

Then, one scientist figured out the most likely cause. Local crows had developed a taste for toad livers and learned to peck the organs out without immediately killing the toad.

Toads have a natural defensive reaction where they puff themselves up when threatened. But, with gaping holes in their chests and their livers missing, the sudden increase in blood pressure only blew the rest of the toads’ organs out of their bodies.

A freak incident in 2013 left a Brooklyn man and three others in his co-op injured and scared to flush their toilets. And for a good reason.

Michel Pierre, 58 at the time of the accident, was in his bathroom when his Flushmate-brand toilet suddenly exploded. The force of the blast showered Pierre in porcelain shrapnel.

He needed 30 stitches in his head, arms, and legs to close his profusely bleeding wounds. He can only count his lucky stars he wasn’t sitting on the can when it blew up.

The reason behind the explosion was plumbing work to install a backflow prevention valve. The contractor had turned off the water, which resulted in air building up inside the pipes until the pressure was too much for the toilet to handle.

Part of the blame also lies in the Flushmaster toilets. In 2012, the brand’s toilets were recalled in the U.S. and Canada due to faulty weld seams that allowed pressure to travel back up into the toilet tank.

Out of the blue, an enormous explosion, with an estimated force of 12 megatons, flattened 830 square miles of forest. To put that into perspective, that’s about 10 times the destructive force of your average modern nuke.

The shockwave of the explosion threw people off their feet and shattered windows hundreds of miles away from the explosion. The most bizarre thing about the event is that no one’s ever found an explosion crater.

The most likely explanation — at least according to current research — is that a stony meteoroid roughly the size of a Boeing 747 detonated roughly 5 miles above the Earth’s surface. It’s an incredibly stroke of luck that the thing landed in the barely populated Russian wilderness instead of, say, Central Europe.