When you think about mythological creatures, you’re probably picturing dragons, unicorns, dwarves, giants… You know, stuff you could find in your regular fantasy novel.

But it’s a wide world out there, and the generic mythic creatures are only a small sliver of everything people have come up over the ages. And some of that other stuff is downright weird.

Let’s take a look at the weirdest and most bizarre mythological creatures from cultures all over the world. 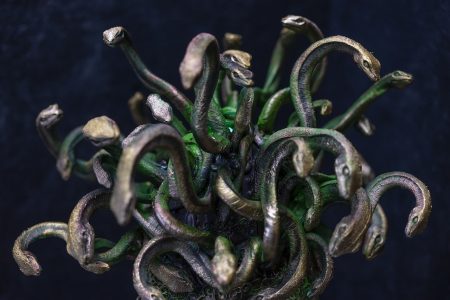 Let’s start off by traveling to the Far East. In Japan, we’ll find a thing called kasa-obake, or the umbrella monster.

Kasa-obake resembles an umbrella, with various body parts tacked on. The most common depiction gives it a single leg, one huge eye, and a long tongue lolling out of its mouth.

According to folk stories, the creature can be seen hopping along country roads in valleys on rainy nights. Anyone who spots it will feel an intense fear and find themselves unable to move.

Luckily, though, in most depictions the kasa-obake is harmless and won’t hurt people, despite the terror it inspires. Unless you ask people from the Saihaku District – in their stories, the creature appears during strong winds and will blow people off into the sky.

Sea monks supposedly live in the waters off the coast of Denmark. French naturalist Pierre Belon described them in 1553 as a “fish wearing the habit of a monk.”

The creatures had a head that resembled the tonsured appearance of a medieval monk. Its body looked like the heavy robe a monk would’ve worn, but instead of arms and sleeves it had long fins or tentacles.

They were sometimes said to have dark skin tones. As to what they did, nobody seems to have even the slightest idea.

Unlike with many other creatures from folklore, we actually have a pretty good idea of what the sea monk actually is. The sea monk was most likely born when a sailor saw a glimpse of an angel shark or a giant squid and did his best to explain the strange beast that just dove back into the depths.

3) The Vegetable Lamb of Tartary (Europe)

But there’s one crucial difference. The sheep is actually the fruit of a plant and it’s attached to its stalk by a long vine.

According to medieval European scholars, the Vegetable Lamb could be found in Central Asia. If one were to cut its vine from the stalk, the lamb would wither and die.

Apparently, at the root of the legend of the Vegetable Lamb is cotton. The plant was unknown in Europe until roughly 1000 BC, and stories of cotton coming from Asia quickly transformed in popular imagination into the Vegetable Lamb.

First things first – Popobawa isn’t a nice creature. Unlike the earlier oddities, this thing will harm you in strange and unusual ways.

According to stories from the island of Zanzibar, Popobawa is an evil, shapeshifting spirit or demon. It sometimes appears as a fearsome bat-winged monster, but it can also assume pretty much any human or animal shape. It’s also sometimes said to emit a foul, sulfurous stench.

Popobawa will pick a household and start tormenting its residents until its had enough and moves on to the neighboring house. Its presence is characterized by poltergeist-like phenomena, like throwing things around, and attacking members of the household.

Since we’re on topic of anuses, let’s return to Japan for a while. On the roads leading to Kyoto, lone travelers might run into shirime – or the “eyeball butt.”

The shirime appears in the shape of a man, but with no facial features or hair. When encountered, the creature will quickly shed its clothes, bend over, and show its anus to its probably confused victim.

And that victim is about to get a whole lot more confused. Instead of, you know, the butthole, the shirime has a large, glowing eyeball between its buttocks.

It’s not really clear what the shirime does besides confusing and scaring people. Maybe exposing its eye-anus is just its thing. At least it won’t try sexually assaulting you with it.

Some creatures from Greek mythology are well known around the world, like the hydra, cyclops, or Cerberus. Others, like the Hecatoncheires, aren’t as well known.

The Hecatoncheires are actually three creatures, all children of the gods Gaia and Uranus. What they all had in common was their terrifying size and anatomy – each had 100 arms and 50 heads.

If that sounds disturbing to you, it was also disturbing to their father, Uranus. In fact, when the triplets were born, he was so disgusted that he tried shoving them back into Gaia’s womb.

When Uranus realized the birth canal is a one-way street, he banished the Hecatoncheires into the underworld of Tartarus. But the story has kind of a happy ending – the monstrous trio ended up allying with the Greek gods and contributing to their victory in the fight against the primordial Titans.

Since these last entries have all somehow gone to the baby-making zone, let’s finish with the king of the horizontal tango. According to medieval Christian scholars, Asmodeus was one of the seven princes of Hell.

His descriptions vary, but one of the more popular ones – approved by the Archbishop of Paris – gives him a man’s torso, a rooster’s leg, and a serpentine tail

Asmodeus also has a dragon’s wings and neck, and three heads. One looks like a sheep, one like a bull, and one like a fire-breathing man.

Representing the cardinal sin of lust, the dragon-riding Asmodeus presides over every carnal act known to mankind. And some that are too depraved for the mortal realm.

It’s not all bad, though. According to the Talmud, King Solomon tricked the demon prince into helping him construct the Temple of Jerusalem.

We’re not exactly sure what the lord of sexual deviancy knows about construction projects. But that’s how the story goes.