The hamburger is probably one of the most quintessentially American food items. But — for good or bad — the cultural influence of the U.S. means you can now chomp down on a burger pretty much wherever you go.

Of course, tastes vary from country to country, and the hamburger often gets a local twist. Some of these hamburger variants are… Rather inventive, to say the least.

Not that there aren’t bizarre burgers right in the U.S. too, though. Let’s take a look at some of the weirder ones we found. 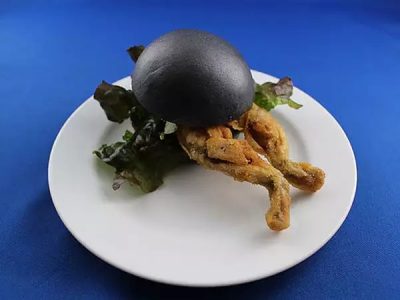 Let’s kick things off with a burger you definitely won’t see at McDonald’s. The Black Bun Fried Frog Burger is a limited-time specialty that occasionally appears on the menu of the Orbi Yokohama Museum.

To begin with, this burger eschews the classic patty in favor of a deep-fried frog. The amphibian is served with lettuce and a sweet chili sauce.

If that wasn’t weird enough, the bun is pitch black. The museum cafeteria mixes bamboo charcoal into the dough to dye it black.

Japan seems to have a penchant for black burgers in general. We’re saying that because the local McDonald’s did once introduce a black burger dyed with squid ink — but that came without the frog. 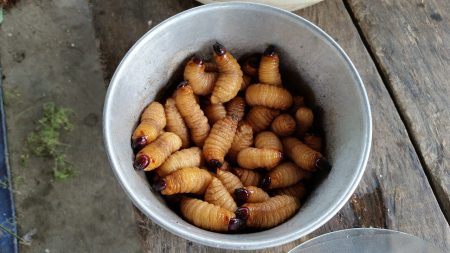 Here’s a burger from the good ol’ USA that ignores the patty. But don’t worry, there’s no frog on this one.

Instead the buns are loaded with maggots.

The recipe is simple. Take two buns and throw them on the grill. Melt a hefty dose of cheese on them, and finish the whole shebang with a handful or two of maggots.

Would it make you gag less if we told the maggots are grown in sterile conditions and are perfectly sanitary? No? Didn’t think so.

As far as we know, this squirming delicacy has only ever made one appearance at the 2011 Arizona State Fair. We can live with that.

The Golden Boy (The Netherlands)

The best burgers are often pretty cheap, straightforward things. But if you subscribe to the view that more expensive equals better, the Golden Boy is the burger for you.

Served by De Daltons diner in Voorthuizen, the Netherlands, the Golden Boy is the most expensive burger in the world. The opulent hamburger will set you back about five and a half grand.

That astronomical price gets you, in all honesty, a strange mishmash of luxury ingredients. The patty is made of premium Wagyu beef, topped with white truffles, Iberico ham, Dom Perignon-battered onion rings, caviar, and king crab. And the saffron buns are covered with gold leaf.

The Golden Boy isn’t just a treat for people with more money than common sense, though. De Daltons donates all revenue from the burger to a local food bank.

At least the money goes to a good cause.

World record-sized meals are usually one-off affairs, made simply to impress. But that’s not the case with what was once the world largest hamburger.

The burger costs a whopping $10,000 and requires you to order it several days in advance. Still, though, it’s right there on the menu — making it the largest commercially available burger in the world. 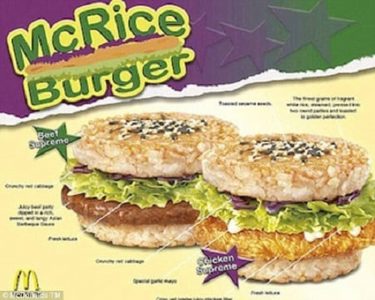 In 2006, the local McDonald’s branch in the Philippines had a bright idea. The Filipinos like eating rice, so why not introduce a burger with rice?

And so was born the McRice. But instead putting the rice between two buns, the buns were rice.

Instead of a regular burger bun, the burger patty was sandwiched between two toasted rice patties. The McRice was available as both a beef and chicken version.

There’s a reason why we’ve written this entry in past tense, though. Apparently, the Filipinos weren’t on board with the idea and the McRice went the way of the dodo.

The Philippines isn’t the only place where rice burgers have cropped up, though. Multiple variants — from McDonald’s or other restaurants — have launched in, among others, Japan, China, and India.

How do you get more American than a hamburger? Simple — replace the buns with a glazed donut, another all-American favorite.

The donut burger — also known as the Luther burger — is available at multiple locations across the U.S, though we couldn’t find any chain restaurants offering it. It’s a regular at state fairs, too.

Imagine trying to sell the Maggot Melt next to a stall selling donut burger. But the maggot burger is probably better for you, since a donut burger packs about 1,500 calories. 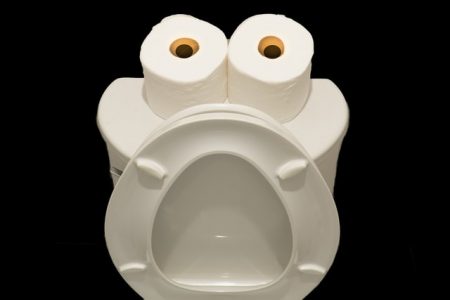 Let’s wrap this list up with a really crappy burger. And we mean that literally — the poop burger is made out of human excrement.

Now, this disgusting creation is not something that was ever sold to the public. It’s the misplaced brainchild of Mitsuyuki Ikeda, a Japanese scientist.

The burger isn’t just a pile of s*** between two buns, though. Instead, Ikeda has developed a process to separate protein and lipids from “sewage mud.”

That is, human poop.

Ikeda invented the burger while trying to come up with a meat alternative that could reduce meat consumption. And it worked. Although the crappy patty is completely sanitary, we sure lost our appetite for meat, and everything else for that matter.