We like to think of space as a cold, empty void. And it is, for the most part, but between the interstellar stretches of nothing there are planets, stars, nebulas… You know, space stuff.

Some of these deep space objects are absolutely terrifying from our terrestrial perspectives. Other times, though, they’re just plain weird.

Here are X objects and phenomena that continue to baffle astronomers for one reason or another. 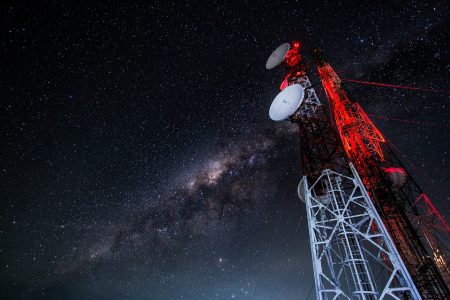 In 2007, researchers detected something weird — an immensely strong and clear radio signal. The signal lasted only for a few milliseconds, but it confused the heck out of scientists.

What could possible be out there that sent such a signal? Was this some kind of a freak one-time space mishap?

As it turns out, it wasn’t. To date, astronomers have observed around 60 of these fast radio bursts (FBRs).

Some of the FBRs consist of several brief signal flashes. A couple of them have appeared repeatedly, seemingly coming from the same origin.

Scientist don’t know what’s causing FBRs. They guess they could be remnants of distant supernovas or radiation spewed out by supermassive black holes — or maybe they’re alien transmissions. 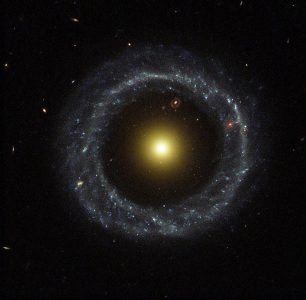 Galaxies generally come in a few different types. They can be elliptical, spiral (like our Milky Way), or irregular clusters of stars.

And then there’s Hoag’s Object. Even with galaxies, there’s always a hipster who just has to be as different as possible.

Hoag’s Object is a bizarre galaxy with its young, blue stars clustered in a ring. In the center of the ring is a bright yellow mass of older, yellow stars.

But between the ring and the core there’s practically nothing. All the galaxy’s stars are neatly divided into either section.

Well, that’s not quite true. In one spot between the star ring and the core is a tiny, miniature version of Hoag’s Object — a small galaxy within a galaxy.

Needless the say, astronomers have no idea what’s going here. 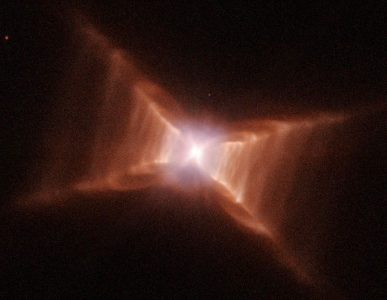 Nebulas — interstellar clouds of gas, dust, hydrogen, and whatnot — don’t generally have any regular shape. But the Red Rectangle in the constellation of the Unicorn defies this rule.

As its name implies, it’s a rectangle. Comparing the Red Rectangle’s geometry to other celestial objects makes it truly unique.

But it’s not just about the shape — the Rectangle’s light is also weird. It emits light from glowing hydrogen, but that light is a reddish orange which it shouldn’t be.

Scientists suspect that the red light is probably a result of dust distorting its color. As to the weird shape, they believe there are two stars at the nebula’s center that send shockwaves of space dust out in a rectangular shape. 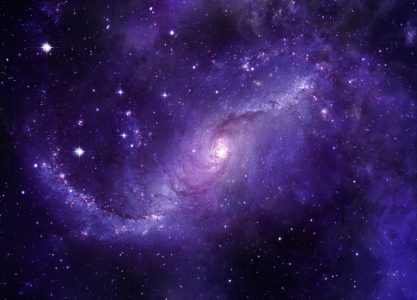 Galaxy X sounds like something out of a sci-fi movie. But its reality is even weirder than that.

Galaxy X, first observed in 2015, is bizarre because it wasn’t observed. You can’t see it — it’s completely dark.

Astronomers were only able to spot Galaxy X because it sent gravitational ripples through the Milky Way. But looking at it, you won’t see anything but cosmic blackness.

This ghost galaxy is composed mostly of dark matter — the invisible space stuff that binds the universe together. In a normal galaxy, the dark matter would hold bright stars and gases in place, but in Galaxy X, someone’s turned out the light.

Located 1,500 lightyears away from Earth, Tabby’s Star did something that stars usually only do once. It got dimmer.

In general, stars shouldn’t fluctuate in brightness like that. Sure, sometimes they dim a bit when large planets pass them, but the change in brightness is usually around 1% — with Tabby’s Star, it’s 22%.

So, what’s going on? Well, one theory that was immediately put forward was that there’s a supermassive alien mega-construct orbiting the star.

Unfortunately, reality is a lot more boring. Analysis of Tabby’s Star has shown that there’s most likely a thick dust cloud somewhere between Earth and the star that blocks its light every now and then. 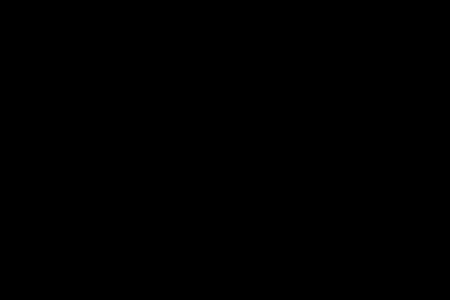 The stretches of space between planets, stars, and galaxies seem pretty empty. But there’s still all kinds of gas, dust, rogue energy, and quantum particles that float around and flash in and out of existence.

Then there are voids. These are areas of space where there’s nothing — they’re completely, totally empty of potential kinds of matter.

The largest of them is the Eridanus Supervoid. This area of space is about one billion lightyears wide (for comparison, the Milky Way is 105,700 lightyears wide).

The Eridanus Supervoid is an enormous area of space where there’s simply nothing. We’d ask you to imagine what that’s like, but we don’t really think the human mind can comprehend such a complete lack of… Well, everything.

Some scientists think that standard cosmology simply can’t explain such a huge celestial hole of nothing. As a result, they think the Eridanus Supervoid could be an imprint left behind when our universe bumped into another, parallel universe.