Space is the place for some truly bizarre phenomena. Once you venture into the endless void, you can no longer count on gravity, direction, or even time.

It’s no wonder, then, that there are some strange planets out there. From our Earthly perspective, these places — each weirder than the last — are real nightmare worlds.

For astronomers, though, they offer fascinating glimpses into the structure and functioning of the universe. Here are just some of the most terrifying planets scientists have discovered so far. 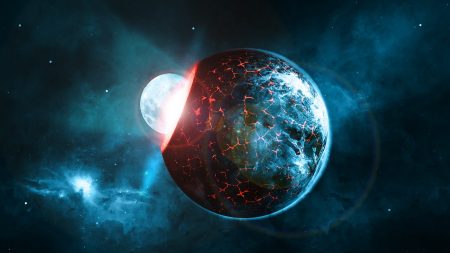 There are no giant wasps on WASP-12b, nor any other alien life. In fact, the entire planet will soon be gone.

Discovered in 2008, WASP-12b is an enormous gas giant, twice the size of Jupiter. Its most notable feature is that instead of the usual more-or-less spherical shape, this planet is shaped like an egg.

That’s because the star it orbits has such massive gravitational pull that it’s stretching the entire planet. Little by little, the star is tearing pieces out of WASP-12b.

Soon enough, it will have devoured all of WASP-12b. In just 10 million years — a blink of an eye on the cosmic scale — there will be nothing left to even imply that the planet was ever there.

From a distance, the gas giant HD 189733 b looks downright friendly. Like our own Earth, it’s a blue planet that’s just begging you to land a spaceship on it (if it wasn’t gaseous).

But if you tried that, you’d soon regret. First, the death world would strip away your spaceship, followed by your spacesuit, and finally your flesh.

HD 189733 b’s clouds are laced with shards of glass. Not only that, massive storms with wind speeds up to 5,400 miles per hour constantly rage in its atmosphere.

The wind sends the shards of glass plummeting sideways through the air. And if you somehow survived the barrage, the planet’s 2,000-degree Fahrenheit temperature would definitely scorch you alive.

Unlike the two previous planets, Kepler-70b is a terrestrial planet with a solid surface. That means you could land a spaceship on it, right?

You could try, but you’d burn long before you got anywhere near its atmosphere. With a surface temperature of 12,000 degrees Fahrenheit — hotter than the sun — Kepler-70b is one of the hottest planets ever discovered.

The reason for its hellish heat is that at one point, the planet plunged straight into its now-dead star. While this would utterly destroy most planets, Kepler-70b somehow pulled out of the inferno, burn-scarred and smoldering.

In fact, the planet is so hot that it’s slowly evaporating itself. Eventually, there will be no planet left, only gas drifting through the empty void.

Welcome to one of the the most inhospitable places in the universe. PSR B1257+12 b is small rocky planet that orbits a pulsar.

Pulsars emit beams of intense radiation out of their magnetic poles. These beams constantly swipe across the surface of PSR B1257+12 b and its two sister planets.

There’s nothing but barren, lifeless rock on PSR B1257+12 b. The constant radiation has rendered it essentially sterile.

In 2015, PSR B1257+12 b got a simpler name. The International Astronomical Union called it Draugr after an undead monstrosity from Norse mythology — a suitably creepy moniker.

Kepler 36-b is a rocky planet, roughly four times the size of Earth. It also has a sibling, Kepler-36c that orbits the same star at nearly the same orbital distance.

That means that two planets regularly come very close to each other. Every 97 days, they pass each other at a distance that’s only five times greater than that between Earth and the Moon.

Despite their closeness, the two couldn’t be more different. While Kepler-36b is terrestrial, Kepler-36c is a gas giant the size of Neptune.

Their relationship isn’t peaceful either. Every time they pass each other, their gravitational forces tear at both planets causing massive volcanic eruptions.

Not only that, both are so close to their star that they’re practically constantly burning. Still, if you could survive the temperature, earthquakes, and volcanos, the passing of the sibling planet would be a sight to behold from viewed from their surfaces.

No matter how bizarre a planet is, they usually have an atmosphere. It might consist of toxic, deadly chemicals, but there’s generally some kind of gas built up around a planet.

Not so with TOI 849 b. Its location makes having an atmosphere impossible.

TOI 849 b is so close to its star that it completes a full orbit around it in less than a day. The radiation and heat from the star burn away everything on TOI 849 b’s surface.

Interestingly, with a diameter three times that of Earth and a mass 40 times greater, TOI 849 b should be a gas giant. But it just can’t do it — the star strips away every single trace of gas on TOI 849 b.