His story goes likes this, he was driving to California so he could buy a Lamborghini. He didn’t really have the money to fund this purchase though as he only had about $3.00 in his wallet.

It was 12:15 p.m. when the highway patrol trooper was attempting to make it up to the speeder going southbound on interstate 15 in Ogden. He thought he would be faced with an impaired driver, or maybe someone with a medical emergency who was driving 32 in a 70 mph zone.

“There’s a curve in the road and he was kind of having a hard time making the curve,” Nick Street said. The trooper initiated the stop and when he finally approached the car, he found none other than a little boy on the verge of tears.

The boy was sitting on the edge of the seat with both of his feet on the brake pedal. The trooper helped him put the car into gear and turn the car off. 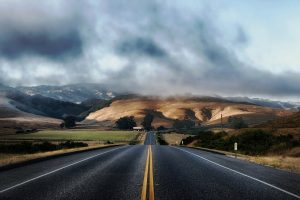 The boy proceeded to tell the trooper that he had left home intending to drive to California to buy a Lamborghini. “He might have been short on the purchase amount, as he only had $3 dollars in his wallet,” the Utah Highway Patrol tweeted.

A dash camera shows a light colored compact SUV driving slowly down the interstate, moving across lames without signaling before the cope turned his signal on to pull him over.

When the car pulled over on the left shoulder, the officer exits his car and you can see him help the child park and turn off the engine. He then returns to his car and walks back to the boy to ask him some questions.

“How old are you? You’re 5 years old? Wow, OK,” the trooper says. “Where did you learn how to drive a car?” The boy answers but it’s inaudible in the video.

Street says an incorrect tweet said that they boy was not identified and had left after a fight with his mom was put out on Twitter. The truth is the boy’s parents had both been at work and an older teen sibling was supposed to be watching him when he grabbed the keys and left.

“He was determined to go get a Lamborghini with the money he had in his wallet,” Street said. “Apparently, he didn’t realize you can get one in Utah.”

The boy only made it a few hours away from home and the agency is in communication with the county attorney to determine whether charges should be filed against the boy’s parents or not. However, due to the boy’s emotional state post-traffic stop, there’s “a good chance this won’t reoccur.”