If you hang around a casino for long enough, you’ll see some incredible sights. You’ll notice some gamblers who walk in with nothing and leave rich. Others will do the precise opposite. There are lucky streaks that seem to go on forever, and cocky players who stake everything they have on one final roll of the dice and come up short. In some of the busiest casinos in Las Vegas, you might even see all of that in the space of a single day.

While seeing any of the things we’ve detailed above would be entertaining and a little unusual, we wouldn’t class them as being outright odd or strange. To find the strangest stories, legends, and odd occurrences from the world of gambling, we have to do a little digging and go back a little further. There are plenty of them out there, though – and here are some of the very strangest we’ve ever heard! 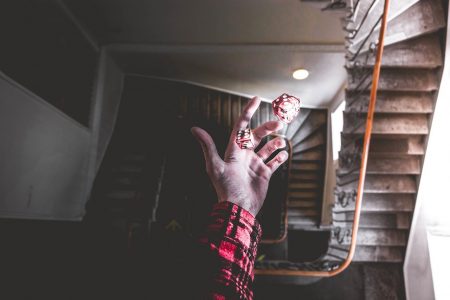 Anyone with a shred of common sense knows that if you see a mushroom cloud from a nuclear explosion, you should run away in the opposite direction as quickly as possible. Even that probably won’t save you – if you’re close enough to the blast to see it clearly, you’re also probably within the zone that will be badly affected by radiation. Perhaps the revelers of Las Vegas in the 1950s didn’t have a lot of common sense, or perhaps they were just uneducated. Whatever the reason, they didn’t run away from nuclear bombs. They actually came running towards them.

During the 1950s, the US military and Department of Energy started a test program that involved detonating hundreds of test nuclear bombs in the desert around seventy miles north of Vegas. The explosions lit up the sky and generated huge mushroom clouds – and attracted tourists. Nuclear bomb tourism was so popular at one point that hotels used to have a detonation schedule for guests, so they didn’t miss their chance to see a bomb go off. Visitors were told they’d be fine so long as they showered after watching the ‘light show.’ That was bad advice.

Slots Weren’t Originally Made For Casinos

It’s hard to imagine what a casino might look like without slots. The machines line every wall of every major casino, and some of the world’s larger casinos have thousands of them under one roof. These days they’ve evolved into online slots websites. Millions of people all over the world are loading up their favorite weird slots in the comfort of their own home. As technology progresses, online slots might even be replaced by holo-slots one day. All of this progress started somewhere, though, and despite what you might think, that ‘somewhere’ wasn’t inside a casino.

The first-ever slot machine was built in 1895 by a mechanic named Charles Fey. Charles wasn’t working for a casino or a bingo hall, and he wasn’t a big gambler. His ‘Liberty Bell’ game was simply something for his customers to entertain themselves with while they waited for Charles to finish working on their cars. The humble mechanic had no way of knowing it at the time, but he’d just created a multi-billion dollar industry.

FedEx Was Saved By A Big Bet

FedEx is the largest delivery service in the United States of America, and one of the largest in the world. It’s worth billions of dollars, and it’s been trading for almost fifty years. Once upon a time, though, it was a humble startup company struggling to pay its bills and continue trading. Were it not for the fact that Frederick Smith is a gambler, it would have closed its doors in 1973, and the FedEx Story would have ended there.

Smith had bills to pay at the end of the month, and insufficient money to meet those bills with. In desperation, he took his last five thousand dollars out of the bank and went to Vegas, figuring that if he was going to go down, he’d go down swinging. Through a combination of luck, skill, and incredible nerve, he walked away from a blackjack table with a profit of $27,000. That was enough to keep the company running for one more month – and that one month was all it needed to begin turning a profit. Within twelve months, he’d made eleven million dollars.

Even Prisoners Gambled In Nevada

You might think there’s nothing unusual about prisoners gambling. Inmates in prisons will often bet on day to day matters to entertain themselves while serving their sentences. Such banal bets weren’t of interest to the inmates of Nevada State Prison in the 1930s, though. They had a fully functional in-prison casino to keep themselves occupied with.

Although there are several origin stories, nobody really knows why or how the 1932 Nevada State Prison casino was allowed to open, but it carried on running until it was finally shut down via state legislature in 1967. That’s despite the fact that the casino never applied for a license to operate a casino, and would have been refused one automatically on account of the fact that all the dealers were convicted felons. There was a poker room, a dedicated sports book, and even a blackjack and craps league. The profits made by the casino went to the prison’s inmate welfare fund, and the prisoners and wardens lived comfortably. This is obviously against the whole point of a prison, and so the only real surprise is that it took so long to shut the operation down.

The Smallest Casino In The World Is In A Taxi

The biggest casinos in the world are split between Las Vegas and Macau in China, but you’ll have to go to Europe if you want to experience the world’s smallest. You’ll find it inside a London ‘black cab’ taxi – but the taxi isn’t in London, it’s in Birmingham in the middle of England! There’s limited space inside the taxi, but Grosvenor Casino – the company that runs the taxi – has managed to squeeze in a table, a dealer, a bar, and a web terminal with access to online slots.

The main purpose of the taxi is to bring people to or from the Grosvenor Casino premises within the city free of charge, but the people who get inside aren’t under any obligation to go to the casino if they don’t want to. If they’d prefer they can drive around the city and enjoy the games for as long as they like. All of the profits made by the casino from the taxi is given away to charity – the whole enterprise is run as a marketing exercise for Grosvenor. We have to say it works.