Tightrope walking is a holdover from a different age—one where circuses were the height of entertainment and wonder. But maybe we should bring high-wire acts back. It’s all about balance, focus on a singular goal, and not making a single tiny mistake lest you plummet to your demise. Okay, maybe not that third thing, but those first two still hold relevance for our lives. Trying to make it from day to day in grind culture that says if you’re not working harder than everyone around you, you don’t deserve the necessities in life. It’s hard to justify balance, rest, and goal-setting with external messaging like that. Consider these five tightrope walkers. Find inspiration in their longest walks, and strike a perfect balance in your life, between work and rest, stress and relaxation, Office reruns and new TV shows. 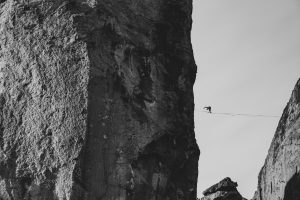 In China, he’s known as the “Prince of Tightrope Walking.” In 2013, Wuxor set out across a tightrope just an inch wide and over 300 feet in the air to cross the Pearl River in Guangdong Providence. He also spent 60 days in the Olympic Bird’s Nest Stadium, tightrope walking four to five hours every day. According to China Daily, he lived in a small room on top of the stadium and walked over 12 miles every day, unless it was too windy. He’s from a family of acrobats and regularly sets new records crossing Chinese landmarks. 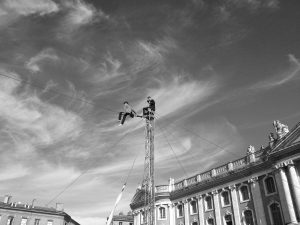 This Guinness Record-setting walk happened back in 2015, when Wallenda was 36. Unbelievably, Nik was born into a circus family, the Flying Wallendas, famous for the tightrope act they performed without safety nets. The family’s been in the acrobat business for over a hundred years, despite a shocking number of family members falling to their deaths. Nik’s done many record-setting strolls through the air, including across Niagara Falls, the Grand Canyon, and Times Square with his sister, Lijana. 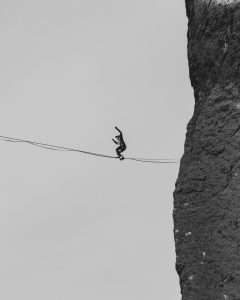 The siblings performed the stunt 25 stories in the air, in 2019. It was a big deal for Lijana because she was injured in a 30-foot fall during a high-wire rehearsal three years prior. She broke almost every bone in her face and had a long recovery before returning to the tightrope act. According to CNN, she got nervous right before starting, which she attributed to the height. I mean, yeah–once you fall 30 feet, it can’t feel great to be that high in the air. She psyched herself up, saying, “I’ve got this. I’ve got this,” and bystanders heard her singing across the tightrope. 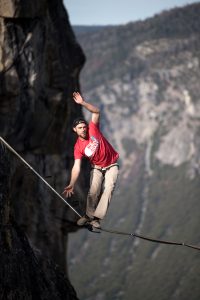 Longest in terms of time spent in the air, Ojeda-Guzman lived on a three-foot square platform for over six months in the Great American Bazaar shopping mall. They paid him a weekly salary, plus a $10,000 bonus when he set the record. They used a cherry-picker to bring him food, water, and exchange his portable toilet. This was back in 1993, so there literally wasn’t anything for him to do, not even doom scrolling Twitter. He spent his time recording his experience on a camcorder (quaint) and watching people bungee jump at a nearby action park.