Modern smartphones are so standardized in design that it can be hard to distinguish between devices from different manufacturers. But it wasn’t always so.

Back when we were still trying to figure out what a mobile phone even is, companies made some pretty wild and wacky design choices. Some of them were successful, others were… Less so.

Here are 10 mobile phone designs that make you wonder what the manufacturers were smoking. 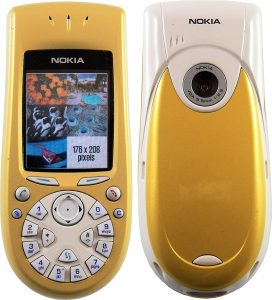 The Nokia 3650 (3600 in North America) looks fairly normal. Until you notice that keyboard.

Granted, it has all the buttons you’d expect a Nokia phone from the early 2000s to have. But for some reason, they arranged them in a circle.

The design was understandably divisive. Most people wished the phone had a regular keypad, but some said that the circular design actually made text messaging easier.

We never got to try this phone back in the day, so we’ll just take their word for it.

Watching TV on your used to be unthinkable before smartphones. In 2006, Virgin Mobile rolled out the Lobster 700TV to put a television in your pocket.

There are two things we’d like to highlight here. First of all, the name — why did they name it Lobster?

And second, what is that bulge? Well, it houses the TV receiver. Guess that was as compact as they could make it at the time.

Needless to say, the Lobster wasn’t a success. It was big, heavy, and ugly — but at least you could watch TV on it.

And it had a regular keypad, which has to count for something. 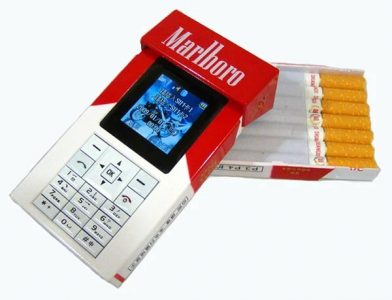 Technologically, there’s nothing groundbreaking about the Marlboro 508. It’s your usual low-end phone, with a small color display, an MP3/MP4 player, Bluetooth, and a 1.3 megapixel came.

It’s also a cigarette case, as its appearance suggests. You can open the top of the case and slip seven cancer sticks into the phone.

This mindboggling invention from 2009 was exclusive to the Chinese market. But you could import one for $144.99.

You know, if you wanted to carry your cigarettes around in a bulky and ugly phone. 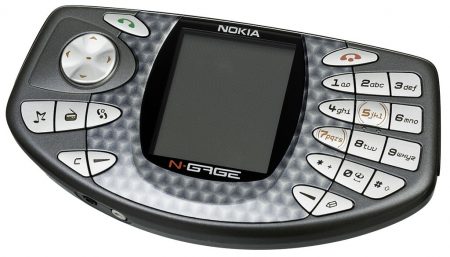 The Nokia N-Gage was a pioneering device when it came to gaming on your phone. It was also one of the worst phone designs of all time.

Introduced in 2003, the N-Gage looks like a hybrid between a phone and a handheld game console. But to actually speak on the phone, you had to hold it at a bizarre angle and speak to its top side panel.

Even doing something as basic as switching the game cartridge was a hassle. You had to take out the back cover, pop out the battery, and then swap the tiny game cartridges.

Nokia released an updated N-Gage QD the next year, but it was too late. The N-Gage had become a joke and Nokia discontinued it in 2006. 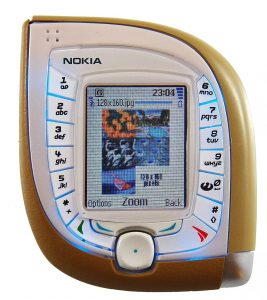 Nokia sure liked to experiment with bizarre phones, but we suppose you can afford that when you were the undisputed king of mobile phones at the time. At least that’s the only explanation we can come up with for how the 7600 came to be.

Sure, (almost) all phones are rectangular, but this is almost a square. To achieve this weird form factor, Nokia sprinkled the keys around the display.

Needless to say, the 7600 was infamously awkward to use. But then again it was sold as a “fashion” phone, so usability was probably never a priority.

The Motorola Flipout could be a spiritual successor to the Nokia 7600. It’s also a square, but this thing came out as late as 2010.

In colors and design, it’s starting to resemble a modern smartphone, touchscreen and all. But Motorola made the Flipout a square for some reason.

If you’re wondering about the strange name, there’s a reason for it. You can rotate the screen up to reveal a full five-row QWERTY keyboard.

The Flipout is kind of fascinating since it represents that moment in time when phone manufacturers were still trying to marry the smartphone and the flip phone of the 2000s. But this wasn’t the way to go.

We’re cheating a bit here — the Nokia 7700 never made it to the market. But it still got made, at least as a prototype.

It’s no wonder this bizarre, bulky thing wasn’t officially released. Just look at it! Where are we even supposed to begin?

It had no keypad and the user was supposed to use a stylus to operate it. Sure, touchscreens eventually became common, but you don’t need a pen to use them.

You also had to talk to the 7700 sideways, as you would into an N-Gage. Perhaps its for the best Nokia quietly buried this monstrosity. 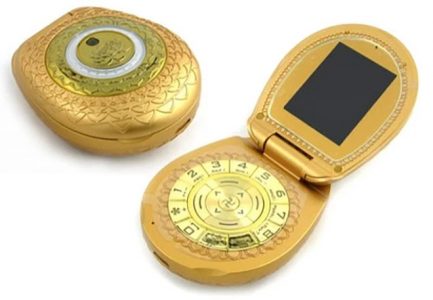 Ever wanted to express your deeply-held Buddhist beliefs with a cell phone? In 2009, you would’ve been able to do that with the C91 Golden Buddha.

Shaped like a Buddhist music box, this golden clamshell flip phone had a rounded case. Opening it you find a circular keypad with a left-facing swastika, a symbol of divinity and the eternal cycle of rebirth in Buddhism.

In specs, this actually wasn’t a bad phone for the time. It had a decently sized screen, an OK camera, and even dual-SIM support.

Nokia strikes again with another one of its fashion phones. And the 7280 sure lives up to that concept — it looks like lipstick.

And it could help you put lipstick on, too, since the tiny screen fades into a mirror when inactive. A design this compact couldn’t accommodate a keypad, so you had to operate the 7280 with an awkward control wheel — kind of like the first iPods.

To make things even more bizarre, Fortune magazine named the 7280 as one of the best products of 2004. It was even recognized at the prestigious iF design awards.

Suppose this all goes to show that you can get praise if you’re just that weird. 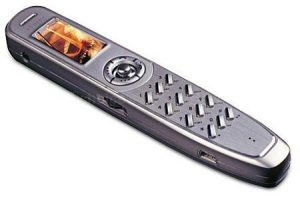 It’s hard to top the Nokia 7280 in weirdness, but the Haier P7 just might do it. This thing must be what happens when a designer thinks “what if my pen was a phone.”

The P7 has an incredibly slim design, but still somehow manages to incorporate a keypad. But the buttons were so tiny and awkward to use that typing a text message on this thing was a pain.

It’s still kind of impressive that Haier even fit a camera, color screen, and a mini-USB slot on the P7. If nothing else, it’s a marvel of engineering.