Some time ago, we brought you the story of Spaceport City, the planned, floating commercial space station in Japan. But as is usual with these things, someone is already taking things a step further.

Orbital Assembly Corporation, a California-based futuristic construction company, is planning the world’s first space hotel. According to the firm’s ambitious plans, the commercial space station could open as soon as 2027.

Titled the Voyager Station, the hotel’s Star Trek-ish name promises to boldly take travelers to where no tourist has vacationed before. The planned space station lives up to its science fiction-inspired name even in its looks.

The circular space station resembles a giant wheel. To provide artificial gravity for its guests, Voyager will slowly rotate around itself.

“Voyager Station is a rotating space station designed to produce varying levels of artificial gravity by increasing or decreasing the rate of rotation,” the project’s official website reads.

If that sounds somewhat familiar, it might be because you’ve seen something similar in movies. For example, Space Station V from 2001: A Space Odyssey used this exact same technology.

Can we finally say the future is here if real life starts imitating scifi movies?

The Voyager station will consist of multiple co-centric wheels. The first one to be built, according to Orbital Assembly, will be inner wheel serving as a docking hub.

“The first piece of Voyager to be built is an un-pressurized ring structure with docking arms and stabilizers designed to capture and lock in place a visiting spacecraft to unload passengers and cargo,” the company says.

“At first there will be one docking port, but later we will add another so that two craft can be docked to the station at the same time.”

Around the docking hub will be the outer ring truss, connected to the inner ring by a network of spokes. The truss will house the Access Tube, which serves as the main passageway around the station.

“The truss will be the backbone of the station and provide mounting for habitable modules, solar panels, radiators, and a rail transport system,” says Orbital Assembly.

In total, the Voyager Station would be around 650 feet in diameter. Put together, the access tubes and habitation modules would provide 125,000 square feet of habitable space for visitors.

All in all, the completed station could house up to 400 people. And if something goes wrong, 44 auto-piloted emergency return vehicles will get everyone safely back to Earth. 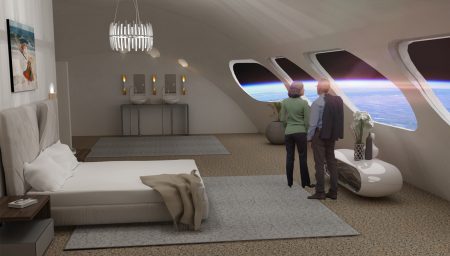 The space station – if actually built – would be able to accommodate both commercial and scientific space travel.

“The station has been designed from the start to accommodate business, manufacturing, national space agencies conducting low gravity research, and space tourists who want to experience life on a large space station with the comfort of low gravity and the feel of a luxury hotel,” the company explains.

The habitation modules will feature 5,300-square-foot luxury villas that can be booked, rented, or even purchased. Each will have cooking facilities, three bathrooms, and enough beds for 16 people.

Thanks to the artificial gravity, visitors would be able to use all amenities just as they would do on Earth.

For the more budget-oriented traveler, Voyager will offer smaller 320-square-foot hotel suites. These are planned to have a private bathroom and sleeping accommodations for two people – just like any hotel room.

In addition to the hotel modules, Orbital Assembly plans to include “government-owned modules used for scientific research, training, and staging facilities.” 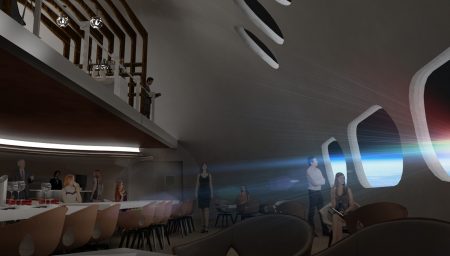 But despite what it might sound like, space is actually an incredibly boring place – it’s nothing but an empty vacuum, after all. So if the potential space tourists aren’t just floating around in zero G, what’s there for them to do?

If Orbital Assembly’s project goes as planned, quite a bit. For example, the company plans to install what they call the Gym & Activity module.

“The large recreation hall has a ceiling over 23 feet high where you will enjoy jumping, running, and playing sports in the 1/6th Earth gravity environment,” the firm says.

“The lower level gym is equipped with weights and treadmills so that you can work out while watching the Earth and stars rotate below you.”

At night, the gym area would be converted into a concert venue “where the biggest musicians on Earth will rock the station.” Rock stars among real stars, huh?

To keep its guests fed, Voyager will have a full-size restaurant and bar, each with its own dedicated module.

The bar area is set to feature three window levels, together with a balcony area. Visitors would be able to enjoy their favorite cocktails while gazing into the vastness of space.

Despite it sounding like a scifi pipe dream, Orbital Assembly is dead serious about the project. In fact, you can already book a room if you want to be among the first space tourists.

“Only a select few will have their name put down in history as being first to visit Voyager Station,” the hotel’s website reads.

It sounds cool and all. Maybe it’s just us, though, but we’d prefer to let someone else do the troubleshooting before taking our space vacation.