Tempers can flare when a person gets served an eviction notice. That’s understandable — after all, someone’s about to get kicked out of their home.

It’s still rare to see somebody deploy what amounts to a biological weapon to try and stop the eviction. But that’s what a Massachusetts woman allegedly did against sheriff’s deputies attempting to serve an eviction notice.

Rorie Susan Woods is accused of unleashing a hundreds-strong bee swarm on the deputies in protest. The 55-year-old beekeeper reportedly smashed several of her hives to drive the officers away from the house.

Her plan didn’t work, though. Woods was also arrested and is now facing multiple assault charges.

Some of the stung deputies were allergic to bees. Fortunately, they seem to have recovered without further issues. 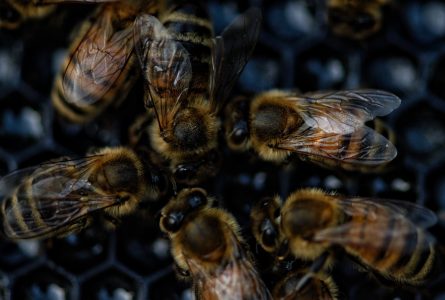 On the morning of October 12, deputies from the Hampden County Sheriff’s Department (HCSD) arrived at a $1.5 million home on Memery Lane in Longmeadow, Massachusetts. They were there to serve an eviction notice to the homeowner, Alton King Jr.

But when the deputies got to the house, nobody was home. Instead, they were met by a group of protesters.

The deputies decided to wait for King to come home. Meanwhile, they started preparing the scene.

“The officers secured the premises and waited for Mr. King to return, as we were told that he was at court trying to delay the eviction,” HCSD deputy sheriff Daniel H. Soto wrote in a report.

As the lawmen were preparing, a blue Nissan Xterra pulled into the driveway. However, that wasn’t King coming back from the court.

Driving the SUV was Woods. Behind the vehicle, she was towing a trailer with multiple artificial bee hives.

Woods stepped out of the Nissan and promptly walked over to the bee hives.

“Woods exited her vehicle and went to the back of the trailer and started shaking bee hives to let the bees out. Deputy Michael Joslyn attempted to stop Woods who successfully freed one of the hives by breaking the cover,” the officers’ report read.

And that’s when all hell broke loose.

The bees living in the hive understandable weren’t very happy that somebody had just broken their ceiling. The insects exploded out of the hive in an unholy stinging swarm.

According to Soto’s report, this initial swarm consisted of “hundreds of bees.” Deputy Joslyn, who had tried to stop Woods, reportedly got stung in his face.

As the bees initially drove the deputies back, Woods continued her protest. She grabbed a beekeeper’s suit and pulled it on.

The report states Woods grabbed additional three large hives from her trailer. She carried them to the door of King’s home and began to shake and agitate the insects within.

“Officers at this time attempted to stop Woods but were attacked by the bees,” Soto reported.

The bugs attacked and stung several of the deputies, including three who reportedly were allergic to bees. Despite that, the deputies fought their way to Woods.

She attempted to resist arrest, and the other protesters (who hadn’t fled from the bees) voiced their displeasure at the arrest. Yet, arrested she was.

“While Woods was being escorted to the cruiser, [another deputy] advised Woods that he and several officers were allergic to bees,” Soto reported.

Woods is now facing several felony charges of assault and battery with a dangerous weapon — meaning the bees. She has pleaded not guilty and has been released without bail.

Sympathy, To a Degree

Eviction proceedings at Memery Lane have been proceeding slowly for at least four years. King was originally served a vacation notice in 2018, but he challenged the ruling. At the time, he owed $1.2 million on the home.

According to reports, Woods herself was one of 21 people whose eviction was appealed in the same year. The Massachusetts Alliance Against Predatory Lending filed an appeal on behalf of Woods and others to help them keep their homes.

Perhaps Woods had a bee in her bonnet out of sympathy for King. For his part, Hampden County Sheriff Nicholas Cocchi said he understands the pain evictions can cause.

“We are always prepared for protests when it comes to evictions. But a majority of the groups who protest understand that we are just doing our statutory duty in accordance with state law,” said Cocchi.

“They appreciate how we go above and beyond to help the people being evicted with anything they need from food and temporary shelter to long-term housing, employment, and mental health and substance use disorder treatment.”

According to Cocchi, his department also reaches out to those about to be evicted ahead of time. In order to avoid nasty surprises and possible lashings-out, he said the department does so to offer assistance in advance.

When it comes to Woods’ stunt, Cocchi’s sympathy begins to run dry.

“This woman who traveled here put lives in danger as several of the staff on scene are allergic to bees. We had one staff member go the hospital, and, luckily, he was all right or she could be facing manslaughter charges.”

“I support people’s right to protest peacefully, but when you cross the line and put my staff and the public in danger, I promise you will be arrested,” said Cocchi.