What is a pellet stove? While those living in rural areas may be familiar with this type of home heating system, most Americans know very little about them. Say the name, and the closest thing a city dweller would conjure up is likely to be a wood stove out of Little House on the Prairie, but these are hardly the same. Still, do pellet stoves really matter?

Yes! The fact is, pellet stoves are becoming more affordable and more popular, and even more importantly, they’re more sustainable than other home heating options. As more home owners seek green options to environmentally unfriendly behaviors, pellet stoves could see a renaissance, but only if people know what they are. 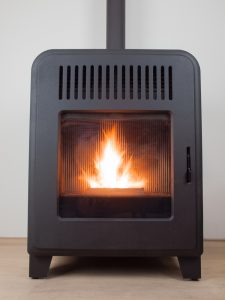 In the most basic sense, pellet stoves are a lot like wood-burning stoves. They both burn fuel to warm your home. That’s about all they have in common, though. When you burn wood, you have minimal control over the rate at which it burns. The pellets that fuel pellet stoves, however, are all consistent, with an optimal level of moisture, and many regulate burn rate to keep your home at a stable temperature. In this way, then, installing a pellet stove in your home is more like installing a traditional furnace – it doesn’t need constant tending to maintain your home’s temperature and is generally quite safe.

One of the main reasons that people are excited about pellet stoves right now is because of their fuel source. The pellets generally contain various wood pulp products and other remnants from wood processing. They’re then shaped and dehydrated, allowing the stove to burn up a waste product, rather than using otherwise valuable wood. They’re also highly efficient, with about 70-83% efficiency, and are less detrimental to air quality than wood stoves. Because they’re made from scraps, the pellets are also generally quite affordable.

Over the last few decades, traditional home radiators have become steadily less visible, shifting from large metal radiators throughout the home to nearly invisible floorboard models. You won’t get that kind of inconspicuousness with a pellet stove, though. Like a wood-burning stove, pellet stoves look industrial and if you don’t live in a cabin in the woods, there’s a good chance it will stick out like a sore thumb. Not everyone is bothered by this, but it’s important to keep in mind. Additionally, the bigger your home, the bigger the stove you’ll need.

Despite seeming old fashioned, pellet stoves are very much of this moment – so don’t forget that you’ll need electricity to run one. That means if you really do live an off-the-grid lifestyle, a pellet stove may not be an option for you. Though gravity-fed stoves are somewhat less reliant on electricity than metered ones, pellet stoves do need power to operate their thermostat feature and keep your home at a consistent temperature. In other words, this is an unconventional option that’s fine for city dwellers, but oddly unsuited to those living in the deep woods.

Revamping your home’s entire heating system isn’t something to approach lightly, but if you are considering your options, it’s worth considering a pellet stove. Simple to use, low maintenance, and relatively affordable in addition to being a sustainable choice, pellet stoves are having a moment. The only question is, will one find its place in your home?