Florida is a weird state. If you have ever visited, you may have picked up on this. If you have ever lived there, you know for sure. Take this scene for instance. You pull up to a rest stop and see three naked women lounging. 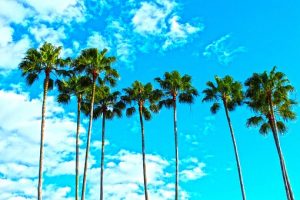 Then the situation turns into a high-speed chase. When officers finally caught up to them, once of the ladies tried to attack the officers with a baseball bat.

The bat was pink, because girls. This is what happened.

Someone reported seeing the women Wednesday morning at a rest stop off of 75. They were all chilling and hanging out in the nude.

When police came to question them, they said that they were showering and they were “air drying.” According to the women, they have been staying with relatives but they left after an argument.

They said they had nowhere else to shower, so they used soap and water and bathed on the grass outside the rest stop building. The women got dressed before speaking with the police, but they drove away before the questioning was over.

The troopers tracked down the car and tried to arrest one of the women. One of the other women appeared to purposely have driven the car at the officer.

At the same time, the third woman got out of the car with a pink baseball bat and tried to attack the officer. Their car drove away again and was pursued by police for the last time.

They did eventually stop the women with spike strips. The cops busted in the windows and the women linked arms to keep from being arrested.

The women were shocked with tasers before being brought into custody and sent to Pasco County Jail.