The earth is a beautiful place with skies the most bright, beautiful, and vivid blue to mountains taller than the clouds. While beautiful, these are some of the weirdest places on earth.

Loch Ness is nothing if not known for its infamous monster.  But some say it would be worth noting even if it weren’t for the monster sightings. Lake Loch Ness is located in the Scottish Highlands and is the largest Scottish loch by volume. It’s deepest point is 755 feet and the lake spans an incredible 21.8 square miles in surface area. The size of this lake alone makes a great setting for a deep water monster to lurk under the lake. The Loch Ness monster first made headlines in 1933 when an article came out suggesting a disturbance in the lake’s surface that may have been a fight between ducks. It was from that article that rumors spurred and were then followed up with a picture that came out of the long-necked lake monster in 1934. Def weird. 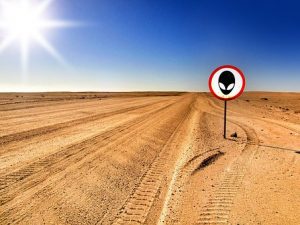 This military base in northwest Las Vegas is known for being the dumping sight from the UFO crash-landing in Roswell, New Mexico in 1947. Alien bodies and technologies were said to have been brought, studied, and stored here. This secretive bases activities are speculative and there are a lot of theories surrounding it.

The giant carved faces on Easter Island are 40 feet tall. There are about 1,000 of them and you can only see their head because the rest of their torso is buried. It’s still a mystery as to how they were moved and built into place. One theory states that they were walked in from quarries on stone platforms.

Tanzania houses one terrifying lake. Animals that die at this lake are turned into statues via calcification. The huge amount of sodium bicarbonate eventually turns them into mummies. This is one of the weirdest places on earth.

This area between Florida’s southern tip, Bermuda, and San Juan, Puerto Rico holds the secret to many disappearances, all weird and all unexplained. The Bermuda triangle was said to have gobbled up ships and airplanes without a trace. Recently, things like GPS, automated planes, and other technologies came into play. And good thing because Bermuda is beautiful and you should absolutely visit the island.

The Lost City of Atlantis

This place is one of the weirdest places on earth even though no one knows where it is, and it may all be just a legend. But let’s assume it is real, and that everyone is right and it is a beautiful serene utopia buried beneath the sea. The city has been tried to be pinpointed for location in spots all over the world. But where is it? No one knows. 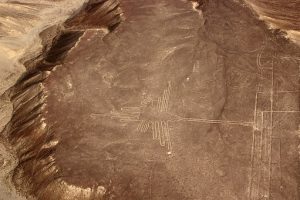 Atlantis is a legend, but the lines in mysterious Nazca are very real. The geoglyphs in arid coastal Peru depict spiders, monkeys, plants, and other figures, and are so big it’s all visible from the sky. They date back to 500 BC and though they are seen best from the air, it’s possible to see them all on land as well. No one is sure why the ancient Nazca culture made these geoglyphs but it could have been part of a ritual or also a linked up constellation in the sky.

This green lake gets its name from its emerald green color. The clean, clear water comes from the snow melt from the karst mountains. During the winter this lake is only 1-2 meters deep and acts like a county park. However, in the spring when the temperature rises and the snow melts, the land below the mountains fills with water. The lake is 12 meters deep during the spring. The park becomes completely submerged and serves as an underwater “park” if you will, for divers. This makes this park one of the weirdest places, well park, on earth.

The pyramid-filled city of Teotihuacan began on the decline about 1,400 years ago. It was left so ruined that no one knows who built it or what it was called. The Aztecs who later went to the site gave it its modern name that means “the place where the gods were created.” The site of Teotihuacan was a major urban area housing 100,000 people and covering 8 square miles. Most of the housing would have been apartment like to house many families.