Yesterday, we brought you a story about moonshine distilled from apples grown in Chernobyl. This (not actually) radioactive drink got us thinking – what are the weirdest cocktails and alcoholic beverages in the world?

So, we did a bit of research and threw this list together for you. We can’t promise these drinks taste good, but they certainly are some of the most unusual. 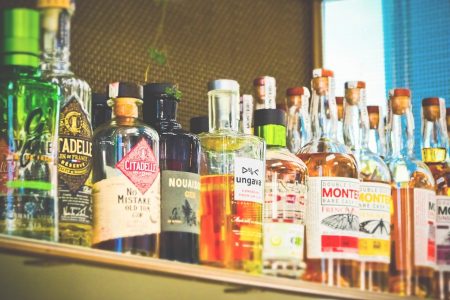 Kumis is a traditional drink from the countries of Central Asia. It’s relatively popular among the peoples of Kazakhstan, Kyrgyzstan, Russia, and Mongolia, among others.

What makes kumis unusual is that it’s made from milk. And not just any milk – traditional, authentic kumis is born from the fermentation of mare’s milk. That’s horse milk, just so that we’re clear.

It’s not very strong, having a maximum of 2.5% alcohol by volume. That’s roughly half of the alcohol in your usual beer, so you’d have to drink quite a bit of fermented milk to get drunk.

We’ve actually covered this one before. Indlovu Gin seems like your usual gin and tonic ingredient, until you learn what’s in it.

And what’s in it is elephant poop. The South African manufacturers flavor their gin with botanicals that have been eaten and excreted by African elephants.

According to the manufacturer, the gin’s “earthy, grassy-type flavor” allows gin connoisseurs to experience “the true taste of Africa in every glass.” Wait, are they saying that Africa tastes like elephant dung extract? Kind of rude.

The manufacturer sterilizes the elephant poop before allowing its flavors to soak into a batch of gin. Yeah, no matter how much they sterilize it, we’ll give this one a pass.

What’s the perfect drink to go with a nice pizza? How about a beer made from pizza?

The Mamma Mia beer actually uses a whole Margarita pizza in its creation process. After the pizza is baked, it’s put into a sort of a tea bag and dunked into the beer mash.

As the pizza soaks, its flavors infuse the beer with authentic Italian flatbread goodness. Or at least that’s how it’s supposed to work.

Unfortunately, the Pizza Beer Company that made the beer pulled it from the market in 2013. If you’re lucky, you might find a forgotten bottle in the backroom of some liquor store, but all most of us can do is remember this beer’s strange legacy. Wonder how it actually tasted?

The Sourtoe Cocktail isn’t an awfully elaborate cocktail. It has only two ingredients – a shot of whiskey and a mummified human toe.

Yes, you read that right. The drink is served exclusively at the Sourdough Saloon in Dawson City, Yukon, to the members of the Sourtoe Cocktail Club.

To become a member of this very select society, applicants must complete their rite of passage. Prospective members must consume the drink and allow the toe to touch their lips.

In 2013, one applicant thought he’d play a little prank and actually swallowed the toe. Yeah, they chased the guy out of town. We don’t want to know how they got the toe back.

If a severed toe in your drink doesn’t do it for you, how about several corpses? Because that’s what you’ll find in Chinese and Korean baby mouse wine.

This centuries-old traditional beverage is made from rice wine infused with a dozen baby mice. The two-day-old critters are added to a batch of wine while still alive and allowed to ferment for about a year.

The drink is thought to be good for your health. According to the region’s folk medicine traditions, it’s supposed to help with asthma and liver disease.

Its delicate taste is said to be not unlike drinking gasoline. Suppose it’s only appropriate that this gruesome concoction would taste like death.

Another drink from the Far East, the Chinese Tezhi Sanbian Jiu includes not one, not two, but three bizarre ingredients. What connects them is that they’re all penises.

Tezhi Sanbian Jiu – translating to three-penis liquor – is fermented with the penises of a deer, a seal, and a Cantonese dog. It’s available on supermarket shelves in Shanghai and elsewhere in eastern China.

Like the baby mouse wine, the drink supposedly has medicinal properties. As you may have guessed from the high penis-to-booze ratio, it’s purported to increase male virility and potency.

One bartender described Tezhi Sanbian Jiu’s flavor being similar to “a vintage port that had gone really, really bad and hung out with some sherry and some prunes.” Apparently, combining dead animal parts with alcohol makes for a healthy but distasteful drink.

Man, that penis booze was a bit much. Maybe we could go for a nice beer, like Hvalur 2 from the Icelandic brewery Brugghús Stedji. It doesn’t contain any penis, only… Oh, come on!

Well, there’s definitely no penis here. Instead, this beer is brewed with whale testicles. That are smoked over a sheep dung fire.

If that sounds like a controversial ingredient to you, you’re not alone. In fact, the EU banned the beer due to its whale content.

So, what did Brugghús Stedji do in response? They developed Steðji Hrútur, a beer that doesn’t contain whale testicles. Instead, it’s made with ram’s testicles.

Okay, that’s too many severed body parts in alcohol. We can’t handle this anymore, we need a strong drink. In fact, give us the strongest.

Ah, here we go. The Scottish brewery Brewmeister’s Snake Venom is sure to wipe your slate clean. It’s the world’s strongest beer with an ABV of 67.5% – that’s almost 30% higher than a regular whiskey.

And no, there’s no actual snake venom in it. We checked. Although it can still be dangerous.

Through some miracle of brewing, Snake Venom goes down like a relatively mild spirit, or a particularly strong beer. So, if you happen to get your hands on this concoction, exercise caution.

Maybe even treat it like drinking real snake venom.