A nice ham is a mainstay at Christmas tables all around the globe. Some of the finest hams in the world come from the region of Andalusia in Spain.

The company Cinco Jotas has been producing premium Iberian ham since 1879. They like doing things the way they were done 150 years ago — they smoke chorizo on open fires and age their hams in cellars whose climate is controlled by opening or closing windows.

To ensure the quality of their hams, Cinco Jotas also relies on old-fashioned methods. The company employs a squad of ham sniffers — or caladors.

These people’s job is exactly what you’d imagine. They smell the hams to determine when they’ve reached optimum condition for sale.

You might be thinking this is an easy job. Just sniff a few hams and bring home the paycheck.

But you couldn’t be more wrong. The caladors push their sense of smell to the human limit, with all the stress that entails. 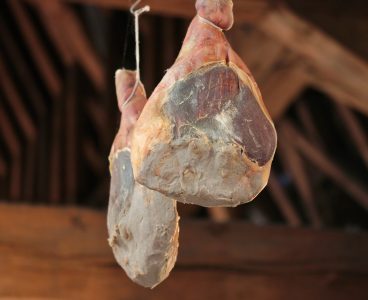 The lead sniffer at Cinco Jotas is Manuel Vega Domínguez. The 58-year-old has been working at as calador since 1998, and he’s served the ham producer since 1989.

Throughout most of the year, he’s the only ham sniffer on the premises. During regular seasons, Domínguez smells about 200 hams a day.

But Iberian hams are in high demand during Christmas, and one man couldn’t possibly do the job alone in the holiday season. That’s why Cinco Jotas hires five additional sniffers around holidays, bringing the team to six people.

However, that doesn’t mean Domínguez gets to maintain his usual routine. Over the holiday season, he has to sniff 800 hams a day.

One whiff isn’t enough, though. Each ham has to be smelled four times to ensure the highest possible quality, bringing the total number of sniffs Domínguez does every day to 3,200.

That isn’t easy. Domínguez said that he has to take a 10-minute break every two hours to maintain his productivity.

According to the man, he and the rest of his team are pushing themselves to the limits. He’s not sure if they could sniff many more hams than 800 per day.

“I will find a way to sniff 801. Perhaps 802 is possible,” Domínguez told the Wall Street Journal.

But what exactly are the caladors smelling for? According to Domínguez, the pigs at Cinco Jotas are fed on acorns, so the meat should have a certain aroma.

The ham sniffers will stick a sharp implement into the ham and then smell it. A proper Iberian ham should smell slightly sweet, with woody and nutty notes from the acorns.

If the aroma is too strong, that means the ham is drying up too much. And if it smells rotten, well, that’s no good either.

The ham sniffers may reject a ham for other off-notes as well. Sometimes they detect notes of coffee, licorice, or toffee, none of which are fit for a premium Iberian ham.

Sometimes, the sniffers extremely delicate sense of smell comes in handy elsewhere as well. Domínguez notes that he once detected a gas leak at the factory.

The ham sniffers are also supposed to look out for insect infestation, but Domínguez says there’s not much need for that. Cinco Jotas said the last bug on their hams was spotted in 1985.

Caring for Your Nose

Needless to say, the caladors’ noses are extremely important to them. As such, they go to extreme lengths to protect their sniffers.

Domínguez said his worst fear is contracting the coronavirus. One of best-known symptoms of the virus is losing your sense of smell, which would probably end his entire career.

To boost his immune system, Domínguez eats six oranges every day. He also finishes every day with a hot mug of handpicked Pennyroyal tea to clear his sinuses.

Occasionally, the most unexpected things can make a ham sniffers job difficult. Domínguez recalled that he accidentally confused his nose recently since he switched to an anti-balding shampoo.

He’s even had to ask his wife to never change her perfume. We can only hope she complies.

“The memory of perfect ham is cooked into my brain,” said Domínguez.

“If you doubt yourself, you cannot do this work. If you doubt one [ham], you have to doubt all of them.”